Hubert (Hugh) Harris was a country doctor who earned the respect and affection of all who knew him.

Hugh was born in Stockton, New South Wales, in 1919 to Dr Hubert and Emily Harris. He was educated at Armidale and studied medicine at the University of Sydney.

On graduating in 1943, Hugh was appointed a resident medical officer at Grafton Base Hospital. In 1944, he enlisted in the Royal Australian Air Force, serving as a Flight Lieutenant.

After the war, Hugh returned to Grafton Base Hospital and, in 1947, he joined a large group medical practice in Grafton and pursued his interest in surgery.

In 1948, he married Shirley Holland in Christ Church Cathedral, Grafton, leading to a lifelong and wonderful partnership of 65 years.

Hugh was adept at emergency surgery and trauma work but, in later years, he turned more to obstetrics and gynaecology. Hugh’s prime focus was always the patient needing help, no matter the hour or day of the week. He unstintingly gave his time and expertise, often to his own detriment. He also served on the boards of Grafton Base Hospital and ambulance service, and lectured nurses at the hospital training school.

Hugh enjoyed fishing at Yamba. He was a skilled woodworker who loved to work with North Coast cedar and built a beautiful dining table for his home.

His later years were marred by increasing deafness and macular degeneration, which he bore without complaint. Shirley lovingly cared for him at home until he needed full-time nursing care.

Hugh passed away peacefully on 9 July 2013 and is survived by Shirley and children John, Richard and Anne. 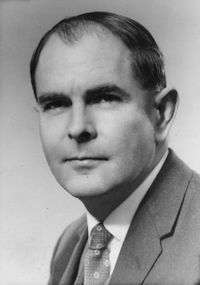