Setting and participants: 180 chiropractors in active clinical practice in Victoria were randomly selected from the list of 1298 chiropractors registered on Chiropractors Registration Board of Victoria. Twenty-four chiropractors were ineligible, 72 agreed to participate, and 52 completed the study.

Conclusions: A range of conditions are managed by chiropractors in Victoria, Australia, but most commonly these conditions are musculoskeletal-related. These results can be used by stakeholders of the chiropractic profession in workforce development, education and health care policy.

There are about 4400 registered practising chiropractors in Australia,1 making chiropractic the eighth largest registered health profession (out of 10).2 During 2005, 16% of Australians, over 3 million people, consulted a chiropractor at least once3 at an out-of-pocket cost of $905 million.4

Despite the large number of people who receive chiropractic care, very little is known about why people seek this care and what care chiropractors provide. With the increased attention, and criticism, directed at the chiropractic profession, it is important to have reliable up-to-date information about what is actually happening in chiropractic clinical practice.5

Previous attempts to document this practice in Australia are now outdated.6-13 Worldwide, systematic approaches to gathering information about chiropractic practice have been limited by study design, including chart abstraction, patient recall surveys, practitioner recall surveys and reviews of administrative databases.14-22

The Chiropractic Observation and Analysis Study (COAST) aimed to describe the clinical practices of chiropractors in Victoria, Australia. COAST used methods developed by the Bettering the Evaluation and Care of Health (BEACH) program. BEACH is a continuous, rigorous, national study of Australian general medical practice clinical activity and has been running since 1998.23,24 COAST documented the following:

COAST was a cross-sectional observational study of chiropractic practice in Victoria, Australia.

A random sample of 180 chiropractors from the list of 1298 chiropractors registered on the Chiropractors Registration Board of Victoria were invited to participate, using a modified tailored design method.25 BEACH investigators have determined that a minimum sample of 40 health care practitioners is required to ensure reasonable precision for more frequent events; on this basis, and given the resources available to complete this study, we approached 180 chiropractors, anticipating a 30% response rate.

Selected chiropractors were sent a primer postcard, followed 1 week later by an invitation letter and a reminder letter after a further 2 weeks. Non-responders were contacted by telephone for a further 4 weeks. Incentives for participation were continuing professional development points (12.5 formal learning activity hours) and an honorarium ($200 gift voucher). Chiropractors were included if they were currently in clinical practice in Victoria. Locum chiropractors were excluded.

Consecutive patients were invited to provide encounter data until 100 encounters were recorded per chiropractor, or when 4 weeks of recording had elapsed.

Chiropractors recorded anonymous patient encounter data by hand on paper encounter recording forms, with items in free text or check box format (Appendix 1). A pad of 106 forms was supplied to each chiropractor, with extra forms provided in case of mistakes. The encounter recording form was based on the BEACH study encounter form and was modified to reflect chiropractic practice. The forms were first piloted with five chiropractors with varying practice styles who each collected data on 10 consecutive patients. The data collection form is available on request.

Chiropractors recorded terms on the encounter form that they believed most accurately described the encounter. These terms were then entered and classified by a coder according to the International classification of primary care, 2nd edition (ICPC-2) using the Australian ICPC-2 PLUS general practice terminology.26,27 For example, for the patient reason for encounter (RFE) or the problem and diagnosis, the research team anticipated that terms would be recorded by the chiropractors to describe patients who presented with little or no symptoms at the time of the encounter. Terms used to describe such visits would be related to wellbeing, wellness, health maintenance and check-up.28,29 Such wellness-related terms were coded to the ICPC chapter “general and unspecified”.

Where an RFE, a problem and diagnosis, or process of care was documented that had no corresponding ICPC-2 PLUS term, a new term (and code) was created. A detailed explanation of the coding, process for generating new terms relevant to the chiropractic profession, and subsequent coding and grouping system has been previously published.30

Descriptive statistics were used to summarise chiropractor, patient and encounter characteristics. RFEs were reported by ICPC chapter, and chiropractor-identified problems and diagnoses were reported by groups of related ICPC-2 PLUS terms. For each chiropractor, patients attending more than once during the 100 encounters recorded were identified by date of birth, sex and postcode. Analyses were undertaken using Stata version 12 (StataCorp) and 95% CIs were calculated for all relevant estimates. The survey estimator procedures in Stata were used to adjust for the clustering effect and to calculate the design effect (Deff). The intracluster correlation coefficient (ICC) was then calculated from the Deff using the formula ICC = (Deff − 1)/(k − 1), where k is the average number of consultations across all chiropractors.31

We compared participating chiropractors’ sex and years in practice, and the proportion practising in a rural setting, with data on all practising Victorian chiropractors provided by the Chiropractors Registration Board of Victoria. We also compared chiropractor characteristics with available data (age and sex only) from the Australian Health Practitioner Regulation Agency.1 We used one-sample t tests using population mean (years in practice) and population proportion (sex, rural practice setting), along with the χ2 goodness-of-fit test for age ranges (with recoding of COAST data to ensure ranges were uniform across the two datasets).

The project was approved by the University of Melbourne Human Research Ethics Committee (HREC 0931651: Chiropractic in Australia), and all participants (chiropractors and patients) provided informed consent.

The distribution of problems and diagnoses managed in the encounters, as identified by the chiropractors, is shown in Box 3. Spinal problems, including chiropractor-recorded terms such as “chiropractic subluxation” (a term used by some chiropractors to describe a perceived dysfunction detected in a joint segment32), and joint dysfunction were the most commonly identified problems and diagnoses. Box 4 shows the techniques and care provided by the chiropractors. The most frequent were manual adjustments (manipulation) and soft tissue therapy. Other care provided by chiropractors during the encounters included (reported as rates per 100 encounters): therapeutic exercise prescription (52; 95% CI, 44–61), advice about exercises in general (21; 95% CI, 15–29), advice about posture (21; 95% CI, 10–18), and recommendations to use ice packs (11; 95% CI, 7–18), heat therapy (8; 95% CI, 4–18) and supplements (5; 95% CI, 3–8). Other recommendations were coded at a rate of less than four per 100 encounters (full results available on request).

People who present to chiropractors are mostly adults with a musculoskeletal condition. People also commonly consult a chiropractor for “maintenance and wellness” or check-ups. The most frequent care provided by the chiropractors during the study period was spinal manipulative and soft tissue therapy. This is the first comprehensive profiling of chiropractic practice undertaken in Australia using BEACH methodology to describe who seeks chiropractic care, why patients seek care, the diagnoses and problems chiropractors identify, and the care that they provide.

There is evidence of patient referral between GPs and chiropractors, albeit in only a small proportion of encounters. In the general population, most people who see a chiropractor, and other complementary and alternative practitioners, also consult a medical practitioner.3 Further research is required to maximise the patient benefit that can be gained through a team approach to primary care.

The common use of maintenance and wellness-related terms reflects current debate in the chiropractic profession. “Chiropractic wellness care” is considered by an indeterminate proportion of the profession as an integral part of chiropractic practice,28 with the belief that regular chiropractic care may have value in maintaining and promoting health, as well as preventing disease.29 The definition of wellness chiropractic care is controversial, with some chiropractors promoting only spine care as a form of wellness, and others promoting evidence-based health promotion, eg, smoking cessation and weight reduction, alongside spine care.28 A 2011 consensus process in the chiropractic profession in the United States emphasised that wellness practice must include health promotion and education, and active strategies to foster positive changes in health behaviours.28

The response rate for this study, 33% of the eligible chiropractors approached, is higher than that achieved in the BEACH study in 2011 (27%).23 The response rates for two recent Australian national surveys of the chiropractic profession, one about workforce and one about low back pain, were 23%33 and 37%,34 respectively. The response rate for this study was similar to that obtained in the first general practice morbidity and prescribing survey conducted from 1969 to 1974 (29%).35,36 For simple postal surveys of health professionals, response rates have been declining over the past 10 years.37 The burden on practitioners to participate in this study may have affected response rates, further compounded by 28% of chiropractors withdrawing after initially agreeing to participate, some of whom withdrew when they realised the amount of work involved. However, of those who did complete the study, 78% indicated they would recommend participating in COAST to other chiropractors. Ideally, data obtained in this study would be routinely collected in chiropractic practice, but infrastructure is not in place to facilitate this, with two-thirds of chiropractors who participated using paper-only clinical records; hence clinical data cannot be easily captured.

This study provides valuable information in an under-researched area of Australian health care. A range of conditions are managed by chiropractors in Victoria, but most of these conditions are musculoskeletal problems. In workforce development, education can be aligned with health conditions commonly managed by chiropractors. Health care policy can be guided to ensure that provision of services is directed to areas of greatest need. Future research relevant to the chiropractic profession can be guided to ensure it is directed towards the most common presentations, so it can potentially help the most people.

1 Characteristics of 52 chiropractors participating in COAST

2 Characteristics of patients in encounters recorded by participating chiropractors

3 Distribution of problems managed (20 most frequent problems), as reported by chiropractors

4 Distribution of techniques and care provided by chiropractors, with 95% CI 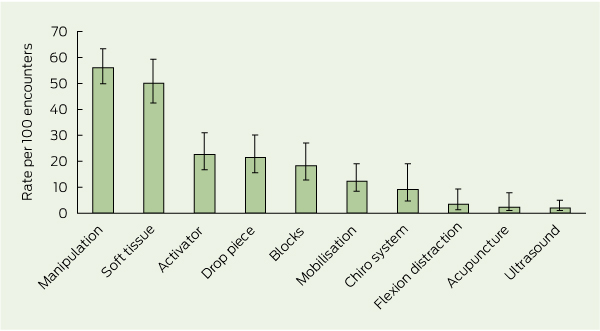 Activator = hand-held spring-loaded device that delivers an impulse to the spine. Drop piece = chiropractic treatment table with a segmented drop system which quickly lowers the section of the patient’s body corresponding with the spinal region being treated. Blocks = wedge-shaped blocks placed under the pelvis. Chiro system = chiropractic system of care, eg, Applied Kinesiology, Sacro-Occipital Technique, Neuroemotional Technique. Flexion distraction = chiropractic treatment table that flexes in the middle to provide traction and mobilisation to the lumbar spine.

This study was funded by the Chiropractors Registration Board of Victoria and the Chiropractors Association of Australia. The funding bodies provided general advice about the design of the project but had no role in the conduct of the study or in the decisions about publication of the results. We thank the members of the Advisory Committee of chiropractic professional organisations including: Amanda Kimpton (Chiropractic Board of Australia), Simon Floreani (Chiropractors Association of Australia), Navine Haworth (Discipline of Chiropractic, School of Health Sciences, RMIT University), John Reggars (Chiropractic and Osteopathic College of Australasia) and Margaret Nicholls (consumer). We thank Maria Potiriadis for project planning advice during the course of the project. We thank the chiropractor and patient participants for their efforts in participating in this study.