Objective: To determine the prevalence of prior and current mental health disorders in parents, including trends over time.

Main outcome measures: Prevalence of prior mental health disorders in parents by birth year and by parent and child characteristics, including Aboriginality, maternal age, socioeconomic status and diagnostic groups.

Conclusions: From 1990 to 2005, there was an increase in prevalence of parents with a prior history of mental health disorders in WA. General practitioners and mental health workers can play an important role in identifying mental illness and in working with families to offer early intervention, referral and support.

To determine the population prevalence of parental mental health disorders, we conducted a retrospective cohort study of all parents of infants born in Western Australia between 1990 and 2005 using de-identified population level data, linked across health datasets. The health data collections used were WA’s Hospital Morbidity Data Collection, Mental Health Information System, Midwives Notification System and Birth Register. The Hospital Morbidity Data Collection contains information on all hospital admissions (public and private hospitals) with corresponding diagnostic information using the International Classification of Diseases (ICD)7 coding system recorded for each episode of care for parents from 1970 to 2005 (ICD-8 for 1970 to 1978, ICD-9 for 1979 to June 1999, ICD-10 for July 1999 to 2005). The Mental Health Information System contains information on all mental health-related public and private inpatient admissions and public outpatient contacts for the period 1980–2005. The Midwives Notification System contains birth information, including maternal characteristics and infant outcomes, for the period 1990–2005.

Each of the datasets are linked by the WA Data Linkage Branch using probabilistic matching that compares identifiers across datasets with extensive clerical review to resolve doubtful links.8 Only a unique project identifier and the individual’s clinical information is provided to the researcher; identifying information is removed.

Prevalence of prior mental health disorders in parents of children born during the period 1990–2005 (per 1000 births) was calculated for each birth year, using birth data as denominators. Separate analyses were conducted for mothers, fathers, all births, first births and mental health diagnostic groups. First births for mothers were defined as those for which the midwives data listed parity as zero and listed the sum of previous live births and still births as zero. For fathers, first births were identified by selecting the earliest birth. Age-specific rates were calculated for parental age.

Trends are presented as the percentage change in the odds for each increase in birth year and their 95% CI. Generalised estimating equations were used to calculate robust standard errors for odds ratios when analysing all births, owing to clustering of births to the same parent. Logistic regression was used to calculate odds ratios for Aboriginality, maternal age and socio-economic status where the outcome was a first-born child who had a mother with a prior mental health disorder, with estimated odds ratios stratified by birth-year group (1990–1993, 1994–1997, 1998–2001 and 2002–2005). R version 2.11.1 (R Foundation for Statistical Computing)10 was used for all analyses.

Our study is one of few that have used population-level linked data to determine the prevalence of a prior history of mental health disorders in parents and, to our knowledge, the only study to examine trends over time. It shows that prevalence of prior mental health disorders increased in parents of infants born from 1990 to 2005; there was a 3.7% increase per year for mothers and a 3.1% increase per year for fathers. The lower prevalence for fathers could be due to underascertainment of fathers on the Birth Register, which has been documented previously.11

There are a number of possible reasons for the increase. It could be due to broader service availability in WA for inpatients and outpatients, the increasing trend to deinstitutionalise people with mental health disorders (particularly during the mid 1980s),12 and better data collection by the Mental Health Information System. However, there could be a true increase in the prevalence of mental health disorders in parents. A previous study by our group showed that there had been an increase in the prevalence of babies born with neonatal withdrawal syndrome in WA,13 indicating increasing drug use by pregnant women. This is also indicated by our data, which show increasing trends in mental health disorders relating to substance use between 1990 and 2005. Another study that used linked prescription and birth data has shown high and increasing use of antidepressants during pregnancy.14 An Australian national survey of psychosis also showed an increase (from 1997 to 2010) in the number of dependent children living at home with parents who have psychosis, particularly mothers.15 These data highlight the increasing burden of parental mental health disorders on the mental health system and on families.

The diagnostic group for which prevalence was highest, in mothers and fathers, was substance-related disorders. For mothers, prevalence was also high for three other diagnostic groups: self-harm ever; depression not otherwise classified and neurotic disorders; and adjustment and stress-related disorders. Aboriginal children had a greater burden of parental mental health disorders compared with non-Aboriginal children for both mothers and fathers. This is consistent with findings from a national survey which found that Aboriginal Australians were twice as likely to report high or very high levels of psychological distress compared with non-Aboriginal Australians.16 In addition, our study shows that there were larger increases over time in the proportions of Aboriginal children born to mothers and fathers with a prior mental health disorder compared with increases for non-Aboriginal children. This indicates an increasing burden in Aboriginal families of parents with a mental disorder, and highlights the need for culturally appropriate mental health services such as healing and wellbeing centres, as called for in the Bringing them home report.17

Although the strengths of our study included its population-based nature and the long period of data collection, our data on prevalence of mental health disorders are likely to be underestimates because we only captured inpatient hospital admissions and public outpatient contacts in the Mental Health Information System. We did not have access to primary care data or a prescription database that could have provided data on individuals who saw general practitioners or received prescriptions for mental health disorders; therefore, we may have potentially missed patients in the community with mental health disorders. By only using hospital admissions data and public outpatient contact data, our sample is biased towards patients with more severe mental disorders.

Despite these limitations, the use of population-level data overcomes many of the difficulties associated with traditional research designs, such as surveys or interviews. Parents may be reluctant to admit to a mental health disorder, particularly those related to substance use. It is important to obtain prevalence estimates of parental mental health disorders to inform practitioners, service providers and policymakers on the extent of the burden and the resources required. Most importantly, our study shows that there has been an increase in prevalence of children born to parents with previous mental health contacts. Moreover, although under-ascertained, our study includes fathers, an important group who are often not captured or not assessed in surveys and screening tools. Our study also highlights high-risk groups that have had increasing mental health admissions over time, including Aboriginal families, younger parents and low socioeconomic groups. These high-risk groups should be a focus for intervention and prevention.

In terms of practice and policy implications, parents with mental health disorders should be offered early intervention, referral and support. The National Perinatal Depression Initiative has highlighted the importance of early assessment and intervention in the perinatal period.18 GPs and mental health workers also play important roles in discussing the ongoing impact of mental health disorders on families and in working with families to plan for respite and support when required. The National Institute for Health and Clinical Excellence has provided guidelines for the clinical management of antenatal and postnatal mental health problems experienced by mothers and has stipulated the importance of the ongoing management of mental disorders.19 As the World Health Organization has stated, “effective solutions for mental disorders are available . . . Some mental disorders can be prevented, while most can be treated”.20 Mental health needs to be considered during treatment and health care planning for parents, to alleviate the symptoms experienced by individuals and to reduce the impact of symptoms on children and their families.

1 Prevalence of children having a parent with a prior mental health disorder or current mental health contact (all birth and first births, Western Australia, 1990–2005) 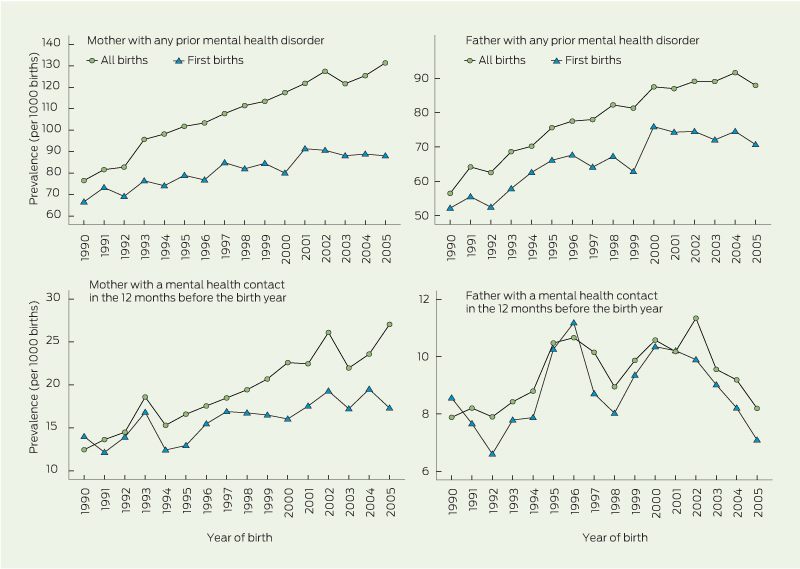 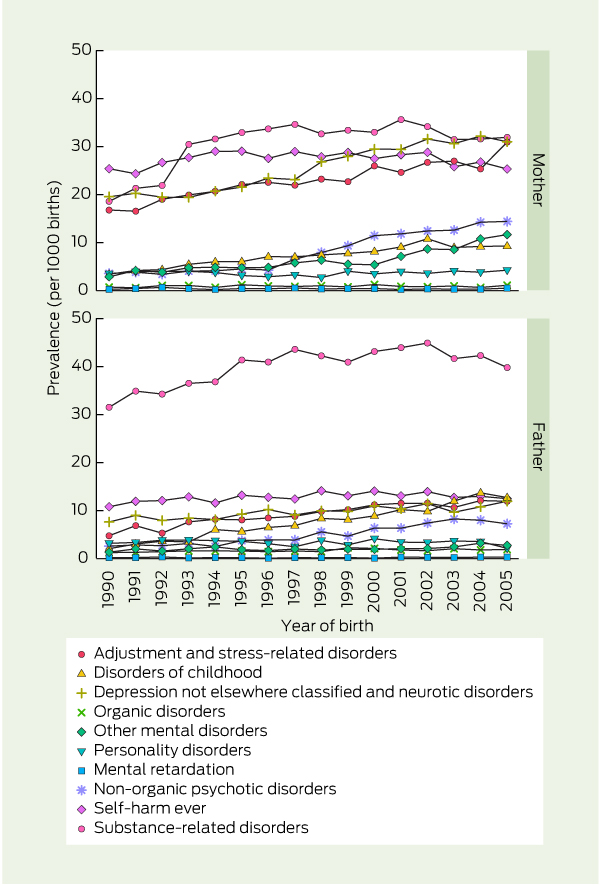