Hookworm in the Northern Territory: down but not out

Objectives: To determine the prevalence and trends of human hookworm infection (HWI) in the Northern Territory over the past 10 years, and to assess the influence of the community children’s deworming program (CCDP).

Design, patients and setting: A retrospective observational analysis of consecutive microbiologically confirmed cases of HWI in patients diagnosed at NT government health care facilities and the main private laboratory servicing the NT between January 2002 and July 2012.

Conclusions: The prevalence of HWI in the NT reduced over the 10-year period. HWI predominantly occurs in individuals outside the CCDP target population. Our data support continuation of the CCDP in conjunction with improvements in housing, health hardware and health promotion. Continued use of albendazole in individuals beyond the CCDP may facilitate the eventual eradication of HWI from the NT.

Hookworms (Ancylostoma duodenale and Necator americanus) are thought to infect 740 million people worldwide.1 Most infections occur in low- and middle-income countries where the root causes are socioeconomic vulnerability and limited access to safe water, good hygiene and adequate sanitation. Hookworm, along with other soil-transmitted helminthiases, is included in the World Health Organization category of neglected tropical diseases. A. duodenale is thought to be the exclusive species in the Northern Territory and is associated with the greatest intestinal blood loss.2,3

The major consequence of hookworm infection (HWI) is iron-deficiency anaemia, which is responsible for significant morbidity, particularly in children and pregnant women. In children, HWI is associated with impaired nutritional status and physical and mental development.4 HWI is considered a public health problem in a country when the prevalence of infection in children aged 1–14 years is > 1%. The WHO’s 2010 global target of 75% coverage of preventive chemotherapy or “deworming” in such countries was not met and has been extended to 2020.1 A recent Cochrane review concluded that the evidence base supporting the effectiveness of routine deworming programs was small and insufficient using Cochrane principles,5 but there is considerable historical support for the role of mass drug therapy for HWI, in parallel with sanitation and hygiene initiatives.1

Although virtually eradicated from the non-Indigenous Australian population by the 1960s, HWI has persisted in Indigenous Australians in remote communities and in immigrants from endemic countries.2 After successful lobbying by NT clinicians for registration of albendazole in Australia,6 instead of the inferior pyrantel, the Indigenous community children’s deworming program (CCDP) with albendazole commenced in 1995 in the NT.7 The Central Australian Rural Practitioners Association (CARPA) Standard treatment manual recommends that in areas where HWI is common, children aged 6 months to 16 years should have a single dose of albendazole twice a year (or pyrantel if pregnant).8 It suggests administration either side of the wet season, in conjunction with routine child health assessments or school-age screening.

We conducted a retrospective observational analysis of consecutive microbiologically confirmed cases of HWI in the NT between January 2002 and July 2012. Ethics approval for the study was obtained from the Human Research Ethics Committee of the NT Department of Health and Menzies School of Health Research (HREC-2012-1842).

Cases were identified from the NT government pathology laboratories information system, LabTrak, which covers all NT government health care facilities, including five hospitals, two correctional centres and more than 50 remote clinics, that collectively serve a current population of about 235 000.10 We also identified cases from data obtained from Western Diagnostic Pathology, the major private provider of pathology services to remote clinics and Aboriginal community-controlled health services in the NT. Data were not available from the two other private providers of pathology services to the NT. Each pathology laboratory examined faecal specimens for hookworm eggs by wet mount microscopy and a concentration method.11

Data on identified HWI cases were linked to NT government electronic health records by medical record number to collect information on patients’ age, sex, Indigenous status, residence, haemoglobin level and eosinophil count at the time of diagnosis. Residence was determined from residential address, and remote (including very remote) areas of residence were defined as per the Australian Standard Geographical Classification.12 Anaemia was defined as a haemoglobin level < 110 g/L, and eosinophilia as an eosinophil count ≥ 0.5 × 109/L.8 We were unable to obtain data on anthelmintic treatment for individual patients. Attempts to obtain robust data regarding numbers of doses of albendazole dispensed per community clinic for the CCDP were not successful.

Data were entered into a Microsoft Access 2007 database and analysed using Stata, version 10 (StataCorp). Descriptive statistics are presented for all patients with HWI between January 2002 and July 2012. Differences between adults and children were determined using the Fisher exact test for categorical variables (sex, Indigenous status, residence) and Mann–Whitney tests for continuous non-normally distributed variables (haemoglobin level and eosinophil count). Level of significance was set at P < 0.05.

From a total of 64 691 faecal specimens examined during the period January 2002 – July 2012, hookworm eggs were identified in 134 samples from 112 patients. Four patients had a second positive faecal sample, all occurring within 8 months of the first detection.

The demographic characteristics, haemoglobin level and eosinophil count of the patients are shown in Box 1, stratified by age group. There were no statistical differences in Indigenous status or sex between children and adults in the sample, but there was a difference in residence. Median eosinophil count was significantly higher in children than in adults, but there was no significant difference in haemoglobin levels.

Ninety and 89 of the 112 patients had data available for haemoglobin level and eosinophil count, respectively. Sixty (66.7%) were anaemic and 65 (73.0%) had eosinophilia. Of note, no children and only four adults had neither of these markers present.

We found a clear and consistent reduction in the number of microbiologically confirmed cases of HWI occurring in the NT from January 2002 to July 2012. Microbiologically confirmed HWI is now a rare event in the NT and occurs mainly in individuals outside the CCDP target group, particularly in adults, prisoners and homeless urban Indigenous people.

The epidemiology of HWI in Australia has been poorly documented since a national hookworm campaign and survey in 1919–1924 demonstrated a prevalence of 10.7% (14 067/130 833) in endemic areas.2 The campaign, which involved treatment, health education and improving sanitation, was focused on non-Indigenous Australians and led to eradication from this population. The prevalence of HWI in the NT was 17% in the 1924 survey (from 886 faecal samples),2 and 25% in a 1994 survey (from 300 samples) in a remote Indigenous community in east Arnhem Land (Aland K, Prociv P, Currie B, Jones H. Intestinal parasite infections and anaemia in Arnhem Land Aboriginal community [unpublished abstract]. Australian Tropical Health and Nutrition Conference; Brisbane, Qld; 17–19 July 1997). We found the prevalence of HWI in the NT in 2011 had dropped to 2.2%. This reduction has occurred since the commencement of the albendazole-based CCDP in 1995, and extremely low rates of HWI are now seen in its target population. However, the magnitude of the effect of the CCDP remains uncertain, as its implementation and coverage at community or regional level has never been monitored or evaluated.

In contrast to other soil-transmitted helminthiases in which the highest intensity and prevalence of infections occur in school-aged children, high-intensity HWIs predominantly occur in adults.3,13 In 1992, a survey in an isolated community in northern Western Australia found HWI prevalences of 93% in children aged 5–14 years and 77% overall.14 After implementation of a hookworm control program, in which regular albendazole was given to children every 6 months and to adults annually, along with health education and environmental management measures, the overall HWI prevalence rate fell from 80% in 1993 to 2.6% in 1999.15 In our NT data, there was a marked reduction in the prevalence of adult HWI from 2002, despite adults not being targeted in the CCDP. This could in part be attributable to a carryover effect from early intense albendazole use in the CCDP in the 1990s and/or the common use of albendazole in the NT for individuals with anaemia or eosinophilia.8 The CARPA manual recommends empirical treatment with 3 days of albendazole (for hookworm, Trichuris trichiura and Strongyloides stercoralis infection) for anaemia, failure to thrive and significant diarrhoea in children.8

Our retrospective study has several limitations. The true prevalence rates are likely to have been underestimated, as systematic sampling was not undertaken. All except six patients were diagnosed in hospital, reflecting a selection bias towards individuals who seek health care, are acutely ill or have comorbidities. Current remote practitioner guidelines recommend performing faecal microscopy for children with failure to thrive, anaemia or chronic diarrhoea, and for adults who are immunosuppressed.8 However, there are several potential barriers to testing patients in remote communities, including patient acceptability and the geographical logistics of ensuring a quality specimen reaches the testing laboratory.

Some cases of HWI may have been missed, as data were not available from two providers of pathology services to the NT. Nevertheless, for notifiable diseases in the NT such as hepatitis B, the government and Western Diagnostic Pathology laboratories data capture over 90% of diagnoses.16 We believe it is a reasonable assumption that this will also be the case for HWI. Patients residing in remote areas were well represented in the study population, and annual numbers of faecal microscopy testing were relatively constant over the 10 years. Thus, we are confident that the consistent downward trend in prevalence demonstrated by our data reflects a reduction in the true rate. Finally, although we have shown that most patients with HWI in the NT had anaemia and/or eosinophilia, community controls were not available for comparison to support a causative association.

Our study, despite its limitations, shows that the prevalence of HWI in the NT decreased over a 10-year study period. Infection was rare in children, the target group for the longstanding CCDP, but infection persists in Indigenous adults in remote communities and those homeless in urban centres, and in prisoners. This reflects, at least in part, ongoing health and socioeconomic inequalities in the Indigenous population compared with non-Indigenous Australians. Our study supports the need for continuation of the CCDP, together with improvements in housing, health hardware (such as water supply and waste removal systems) and health promotion. It also emphasises the importance of using albendazole in children and adults with anaemia and/or eosinophilia, with the aim of eventual eradication of human HWI from the NT. 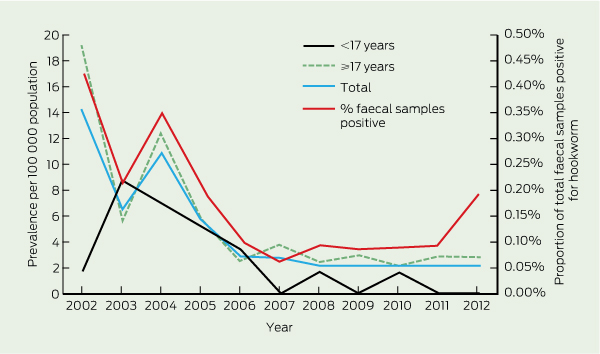