“Down the drain”: carbapenem-resistant bacteria in intensive care unit patients and handwashing sinks

Objectives: Clinical utility of carbapenem antibiotics is under threat because of the emergence of acquired metallo-β-lactamase (MBL) genes. We describe an outbreak in an intensive care unit (ICU) possibly associated with contaminated sinks.

Design, setting and participants: Four clusters of gram-negative bacteria harbouring the MBL gene blaIMP-4 were detected in the ICU at Dandenong Hospital between November 2009 and July 2012. Epidemiological investigations were undertaken in order to identify a common point source. During September 2012, screening using rectal swabs for all ICU patients, and environmental swabs targeting all ICU handwashing sinks and taps were collected. Samples were cultured onto selective carbapenem-resistant Enterobacteriaceae (CRE) agar. Suspected CRE isolates were further characterised using the modified Hodge test and VITEK 2 and confirmed by polymerase chain reaction and sequencing of MBL genes. Clinical and environmental CRE isolates were typed by pulsed-field gel electrophoresis.

Results: Ten clinical isolates and one screening isolate of CRE (consisting of Klebsiella pneumoniae [5], Serratia marcescens [4], Enterobacter cloacae [1] and Escherichia coli [1]) were detected with the blaIMP-4 gene over the 30-month period. S. marcescens was isolated persistently from the grating and drain of eight central sinks. Molecular typing confirmed that clinical and environmental isolates were related. Tap water cultures were negative. Several attempts to clean and decontaminate the sinks using detergents and steam cleaning proved unsuccessful.

Conclusion: This report highlights the importance of identification of potential environmental reservoirs, such as sinks, for control of outbreaks of environmentally hardy multiresistant organisms.

One of the most concerning emerging resistance traits among gram-negative bacteria is the ability of these organisms to produce carbapenem-hydrolysing β-lactamases, which confer resistance to almost all β-lactams.1 Carbapenem-resistant Enterobacteriaceae (CRE) are increasing in prevalence worldwide, causing growing concern, as they are often combined with non-β-lactam resistance to produce isolates that are multidrug resistant, have few treatment options available and are associated with high mortality rates.2

Although multiple resistance mechanisms have been identified, carbapenem resistance is often plasmid-encoded, allowing gene dissemination and a propensity to cause nosocomial outbreaks.3-6

We describe a CRE outbreak due to the presence of the metallo-β-lactamase gene blaIMP-4 in an intensive care unit (ICU) associated with contaminated sinks. This report highlights the key role of bacterial environmental contamination and sink design and usage in the propagation of CRE outbreaks.

Dandenong Hospital is a 440-bed tertiary referral hospital in Melbourne, Australia. The ICU has a 14-bed capacity, admitting both medical and surgical patients and averaging 1400 admissions yearly.

Ten ICU patients were found to have clinical specimens with Enterobacteriaceae harbouring the blaIMP-4 gene between November 2009 and July 2012. The ICU routinely screens for vancomycin-resistant enterococci (VRE) carriage using rectal swabs on admission, weekly and on discharge. During the 4-week period from 6 September to 4 October 2012, CRE screening was performed in addition to the routine screen for VRE.

Environmental screening for CRE targeting all 28 wet area locations (including 11 sinks and taps, as well as water fountains and ice machines) was performed. Samples were recollected from CRE positive locations after successive decontamination attempts. A total of 97 samples were collected from taps, water, grates and drains (10 cm down and above the water trap interface where biofilm may be expected to persist).

Clinical characteristics, patient demographics and ICU admission details of all 11 patients are summarised in Box 1. Patients acquired CRE after a median length of stay in ICU of 10 days (range, 3–134 days). No patient died due to clinical CRE infection. Patient 1 had a prolonged CRE bacteraemia that responded to removal of a central venous catheter, the presumed source of infection.

A total of 111 rectal swabs were collected from 71 patients. Only one patient (Patient 11) was CRE-positive with an E. coli isolate detected.

S. marcescens was the only species recovered from environmental samples and was isolated persistently, even after six attempts to decontaminate the grates and drains of eight of the 11 central sinks in the ICU. Tap spout and water cultures were negative for CRE.

Three of the four S. marcescens clinical isolates from 2010 and 2011 were indistinguishable or closely related by PFGE to four isolates from sinks. S. marcescens was isolated from an intercostal catheter swab of Patient 4, matching two sink isolates; Patient 5 had an endotracheal aspirate identical to two different sink locations; and the urine isolate from Patient 6 was closely related to a different sink. The isolate from Patient 7 was unable to be typed by PFGE.

Sink inspection revealed aged and deteriorating porcelain, even though sinks were only installed in 2005. Sink design did not comply with Australasian clinical design standards,8 with a small, shallow sink and a tap that directed water over the drain (Box 2). The design of the ICU sinks led to poor use for hand hygiene (although measured hand hygiene compliance using alcoholic hand rub was around 70% within the unit) and the potential for organisms residing down the drain to be splashed back onto staff hands or contaminate patient areas. It was also revealed that the handwashing sinks had been used incorrectly, with staff disposing clinical waste and residual antibiotics directly into drains. Further enquiry also revealed that a single brush had been used to clean down the drains of all sinks in the ICU without disinfection between sinks.

Cleaning was attempted in an effort to rid the organisms from the sinks. First, cleaning of grates and drains using single-use, soft brushes was attempted, but repeat screening revealed continued CRE growth. Next, in addition to the brushes, hypochlorite deep cleaning was used after the scrub; however, heavy CRE growth was again evident 1 week later. Finally, an attempt using pressurised steam decontamination (Jetsteam Maxi with plunger tool attachment, Duplex) for 1 minute at 170°C on grates and drains appeared to eradicate almost all CRE at Day 1 (one sink remained colonised); however, repeat testing 3 days after steam treatment showed re-emergence of CRE in all previously affected sinks.

We report an outbreak of CRE in an ICU with identical organisms isolated from patients and an environmental source (sinks).

Dissemination of carbapenemase-resistant bacteria has been reported previously in an ICU in Australia, with 62 patients infected or colonised with gram-negative bacteria from multiple genera containing the blaIMP-4 gene.9 The gene is carried on a highly mobile plasmid making it efficient for nosocomial transmission. The gene can reside in multiple genera of hardy environmental organisms that can establish a reservoir within biofilm.

Identifying the outbreak using molecular methods allowed us to establish clonality between clinical and environmental isolates and to propose a mechanism whereby patient contamination may have occurred. Although we cannot prove that the sinks were the source of patient infection, the persistence of the organism within the environment was a concern. Attempts at sink sterilisation were futile, and complete eradication will require future sink removal and replacement with appropriately designed sinks.

Our data should act as a reminder on the importance of appropriate hospital design, adequate environmental cleaning and antimicrobial stewardship in the hospital setting. 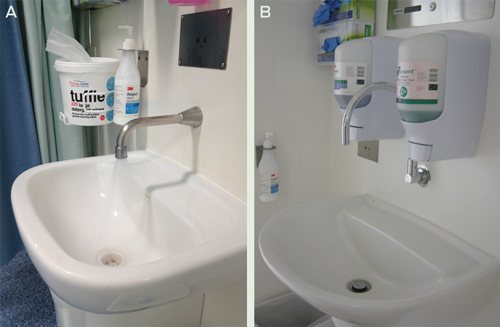