Recent increase in detection of alprazolam in Victorian heroin-related deaths

Objectives: To examine the rate of detection of alprazolam among cases of heroin-related death (HRD) in Victoria, including the relationship between alprazolam supply and HRDs.

Design and setting: Population-based study of community alprazolam supply in Victoria and HRDs reported to the Victorian coroner from January 1990 to December 2010.

Main outcome measures: Number of prescriptions for alprazolam supplied; defined daily dose (DDD) per 1000 population per day of alprazolam; number of cases of HRD in which alprazolam was detected through postmortem toxicological testing.

The use of benzodiazepines by opioid-dependent people is widespread.1-4 The 2011 Victorian Illicit Drug Reporting System (IDRS), a sentinel survey of people who inject drugs (PWID), reported 92% lifetime and 71% recent (in the past 6 months) use among PWID.5 PWID use benzodiazepines for a number of reasons: to enhance the intoxicating effects of heroin or other opioids, manage anxiety, or manage withdrawal symptoms.3

The contribution of benzodiazepines to heroin overdose is well established.6,7 Alprazolam is a benzodiazepine registered in Australia for short-term treatment of anxiety and panic disorder. It is not recommended as first-line treatment because of concerns about risks of dependence and its potential for misuse.4,8

Alprazolam, like other commonly misused drugs, has a rapid onset and offset of action and high potency.8 Alprazolam may also be more toxic in overdose than other benzodiazepines.9 Laboratory-based studies have found that in combination with methadone, alprazolam has significant effects on respiration.10 A review of the interaction concluded that most evidence suggests the interaction is pharmacodynamic in nature.11

Victorian IDRS reports showed recent alprazolam use increased from 8% in 200512 to 69% in 2011.5 Alprazolam is now the most commonly injected benzodiazepine,5 with a reported street price of three tablets for $10.13 Alprazolam use is associated with disproportionate levels of harm, including amnesia, violent outbursts of rage in otherwise non-violent individuals, and theft.1,13-15 In Victoria, most alprazolam (81%) used by PWID in 2011 was obtained from illicit sources.5

Given the increased number of episodes of serious harm associated with alprazolam use, we aimed to examine its public health impact, to inform prescribing and to guide appropriate policy responses. We investigated trends in alprazolam prescribing and its detection in heroin-related deaths (HRDs) in Victoria. Our hypothesis was that increased mean consumption of alprazolam is likely to have significant effects on heroin users,16 a population already vulnerable to drug toxicity.

Estimates of prescription numbers for all dose formulations of alprazolam dispensed in Victoria for each calendar year, 1990–2010, were calculated from national supply data, Australian Statistics on Medicines (ASM), published by the Pharmaceutical Benefits Advisory Committee Drug Utilisation Sub-Committee. We determined the annual proportion of Pharmaceutical Benefits Scheme (PBS) supply to Victoria using data from Medicare Australia and applied this proportion to the annual ASM data. The ASM data provide a more complete estimate of alprazolam supply, as they include both private non-PBS prescriptions (those that do not attract a PBS subsidy) and PBS prescription numbers.

A defined daily dose per 1000 population per day (DDD/1000/day) for Victoria was calculated for each year using the same Victorian proportions derived from the PBS figures, the DDD for alprazolam (1 mg),17 the base number of estimated alprazolam prescriptions in Victoria, the usual pack size (50 tablets) for each dose formulation and Victorian population data.

Annual aggregate numbers of HRDs and annual numbers of cases of HRD in which alprazolam was detected were extracted from the Victorian Institute of Forensic Medicine toxicology database. Cases reported to the Victorian coroner in the 21-year period 1990–2010 that were classified as drug-related deaths, involved heroin and had been subjected to toxicology testing were included. All cases had results for a full range of toxicology tests, including for ethanol and common drugs of misuse. All presumptive detections had been confirmed by appropriate analytical techniques. Alprazolam had been tested for, using both immunoassay class tests on urine or blood (depending on availability of specimens) and gas chromatography–mass spectrometry on blood. All detections had been confirmed and quantified in blood using validated methods.

We used a Poisson regression model to assess the relationship between estimated trends in alprazolam supply and HRDs involving alprazolam. All statistical tests adjusted for annual fluctuations in HRDs. Data were analysed using Stata, version 11 (StataCorp).

The Poisson regression model showed that for every 1 unit increase in DDD/1000/day, HRDs involving alprazolam increased at an incidence rate ratio of 2.4 (95% CI, 2.1–2.8; P < 0.001). Box 4 shows a log linear relationship between supply and the proportion of HRDs in which alprazolam was detected.

Our study over the 21 years from 1990 to 2010 showed a number of interesting trends in alprazolam prescribing and supply and its relationship to HRDs in Victoria. First, the supply of alprazolam increased despite its status as a second-line treatment for its approved indications; second, the increase in the supply of the high-dose formulation was disproportionate to the increase in other formulations; and third, the rate of detection of alprazolam in HRDs increased more rapidly after 2005, concurrently with other reports of increasing harm among PWID.13 The association between the detection of alprazolam in HRDs and alprazolam supply was strong and significant. While alprazolam may be more toxic in overdose than other benzodiazepines,9 the accelerated rate of detection in this population since 2005 could reflect an increased preference for and use of alprazolam,1 particularly the high-dose formulation, among heroin users.

This raises questions about the increased prescribing of a drug not preferred for treatment of its primary indication,8,18 and for which little evidence exists for effectiveness beyond short-term use.4 This is especially important given that it may be more toxic in overdose.9 We have shown that the proportion of HRDs in which this benzodiazepine was detected increased over time as supply increased. Understanding the reasons for the increasing average population-level consumption of alprazolam may help to decrease its supply and the harmful effects seen among PWID. This would be consistent with a previous study that showed that the average consumption of potentially harmful products such as salt and alcohol predicts the number of people affected in the statistically “deviant” tail end of a population distribution.16,19

The number of HRDs has remained fewer than during the heroin glut in the late 1990s,20 which led to the peak in deaths shown in 1999. The lower numbers are likely to reflect trends in heroin supply and should not be interpreted as evidence that alprazolam is relatively safe.

A relative strength of our study is the reporting of all Victorian HRDs spanning a 21-year period, enabling the identification of long-term trends in alprazolam used shortly before death. These data provide valuable information for the future prevention of deaths among people who use heroin. In addition, the prescription data and DDD calculations are estimates of the total number of prescriptions dispensed, based on data from the ASM and Medicare. Incorporating the ASM data improves the accuracy of total prescription volume through the inclusion of private prescriptions.

The absolute number and rate of cases of HRD in which alprazolam was detected has increased substantially since 2005. Concern about the misuse of alprazolam in 2010 led to a request to the Australian National Drugs and Poisons Schedule Committee to reschedule it to the more restrictive Schedule 8.22 Among the committee’s stated reasons for not doing so at that time was that there was insufficient evidence of a problem.

This study provides further evidence of the increasing problem, perhaps involving high-dose formulations, of use of diverted medications among PWID.1 Given the growing concerns with alprazolam use among PWID and its increasing involvement in HRDs, supply control measures — such as better monitoring and surveillance (including real-time prescription monitoring), rescheduling to Schedule 8, and education of health professionals — are warranted. Provision of information about the risks of concurrent use of opioids and alprazolam to PWID is also essential. 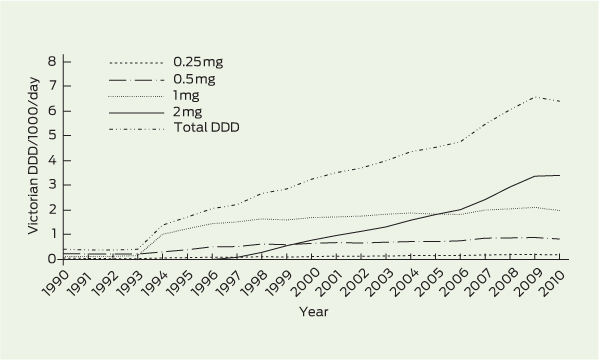 3 Number of heroin-related deaths (HRDs) and proportion of cases in which alprazolam was detected, Victoria, 1996–2010 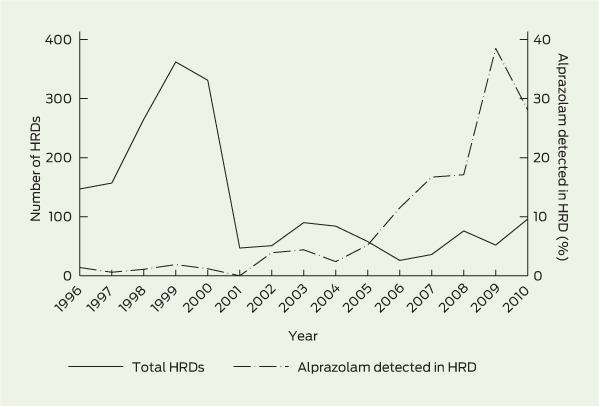 4 Relationship between annual proportion of heroin-related deaths (HRD) in which alprazolam was detected and the annual defined daily dose (DDD) per 1000 population per day, Victoria, 1990–2010* 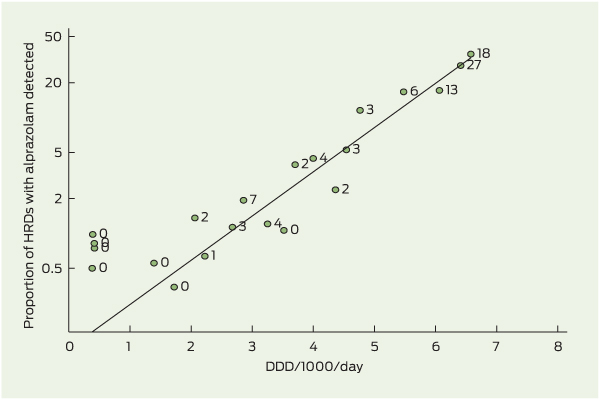 We are grateful to Damien Jolley and Rory Wolfe of Monash University for providing statistical advice; the PBAC Drug Utilisation Sub-Committee for extracting ASM national prescription volume data; and Katayoon Yazdani for assisting in the compilation of Medicare Australia data.

The views and conclusions in this article are ours and do not necessarily represent those of the Department of Health.

Suzanne Nielsen has worked in an unpaid capacity as an investigator on projects funded by untied educational grants from Reckitt-Benckiser (RB). She has not received any direct funding. Louisa Degenhardt has received untied educational grants from RB to undertake postmarketing surveillance of suboxone tablet and film products in Australia. Malcolm Dobbin has received an honorarium from Pfizer for lectures, which was donated to charity. Neither RB nor Pfizer had knowledge of, or input into, this paper.