Beyond injecting drug use: investigation of a Victorian cluster of hepatitis C among HIV-infected men who have sex with men

Objectives: To examine increased notifications of hepatitis C virus (HCV) in men who have sex with men (MSM) infected with HIV in Victoria, and evaluate HCV transmission risk factors other than injecting drug use.

Design, setting and participants: Case series through retrospective review of all HCV cases in Victoria from 1 April 2010 to 30 June 2011, with clinical and laboratory data examined in likely MSM to identify a co-infected cohort. Patients with newly acquired HCV with HIV co-infection were invited to complete a questionnaire exploring novel risk factors for HCV transmission (non-injecting drug use, sexual practices with increased likelihood of trauma, and presence of genital ulcers). Sequencing was performed to determine the local molecular epidemiology of HCV co-infection.

Main outcome measures: Demographics of newly co-infected MSM, traditional versus novel risk factors for HCV acquisition, prior knowledge of potential for sexual transmission of HCV, and association between viral sequences.

Results: Thirty-one patients with HIV were identified from 3365 notifications of hepatitis C. The median age was 42 years, and median time from HIV to HCV diagnosis was 22 months. Most patients were asymptomatic, with abnormal liver function tests prompting HCV testing. Interviews with 14 patients identified a high prevalence of novel risk factors and limited knowledge of HCV risk. Two clusters of matching viral sequences were identified.

Conclusions: Novel HCV transmission routes have emerged in Victoria. These data reinforce the need for targeted testing and prevention strategies among HIV-infected MSM.

Hepatitis C virus (HCV) has emerged worldwide as a major infectious disease. An estimated 221 000 Australians (about 1% of the population) were living with chronic hepatitis C by the end of 2010, and HCV infection is now the most common indication for liver transplantation.1,2 While HCV diagnosis rates have declined nationally over the past 10 years, the persistence of risk behaviours, and the relatively limited uptake of HCV treatment (only 3760 Australians were treated for HCV infection in 2010) suggest that the epidemic is ongoing.1

Public health measures to curb HCV infection in Australia have focused on harm reduction. Injecting drug use (IDU) remains the predominant risk factor,3 but there has been accumulating evidence of sexual (permucosal) transmission over the past decade. Two per cent of the 899 newly acquired Australian cases from 1997 to 2000 were considered related to sexual contact,4 and more recent recognition of HCV–HIV co-infection in men who have sex with men (MSM) has prompted reconsideration of what constitutes blood-to-blood contact.5-7 Several studies of HIV-infected MSM have identified specific risk factors for HCV transmission: group sex, unprotected intercourse, fisting (inserting a hand into the rectum), non-injecting (ie, nasal or rectal) drug use, use of sex toys, and concurrent genital ulceration.6,8-10 Notably, reports of sexually transmitted HCV in HIV-negative MSM remain rare. Nonetheless, with the accelerated progression of liver fibrosis in patients co-infected with HCV–HIV now well established, co-infection has become a key issue, with liver disease-related mortality ranking as one of the leading causes of death among HIV-infected individuals in the developed world.11,12

The prevalence of HCV co-infection in Australians living with HIV was estimated at 13.1% in 2002 and 9.9% in 2010, with most co-infected individuals reporting IDU as a risk factor.1,13 One Melbourne sexual health clinic, however, identified 24 patients with newly acquired HCV without a history of IDU among 620 HIV-infected MSM over an 8-year period up to March 2010.14 We aimed to examine HCV acquisition among HIV-infected MSM in Victoria and to determine the relevance of novel risk factors within this group.

We undertook a retrospective review of all cases of HCV notified to the Victorian Department of Health from 1 April 2010 to 30 June 2011. The investigation began in April 2011, with subsequent cases examined prospectively. Hepatitis C is a nationally notifiable disease; in Victoria, medical practitioners and laboratories are legally required to notify the Department of Health. From these notifications we delineated a case series of newly acquired HCV infection in MSM infected with HIV (Box 1).

High-caseload centres were the focus of our investigation, including general practitioner clinics specialising in HIV medicine and infectious diseases services. All notifications from these centres were crosschecked with the Victorian HIV Registry (Centre for Population Health, Burnet Institute, Melbourne) to identify patients with co-infection. We undertook the same process for any doctors’ notifications where MSM behaviour was indicated. A standard definition of newly acquired HCV was used, based on any one of: antibody seroconversion in the previous 24 months, new viraemia with a negative antibody test in the previous 24 months, or unexplained alanine aminotransaminase (ALT) elevation (at least 350 U/L; reference interval, 5–50 U/L) at first positive antibody or HCV RNA detection.15

For these patients, we gathered epidemiological data from the following sources:

To examine whether specific strains of HCV were being transmitted, VIDRL staff performed sequence analysis of HCV isolates from a random selection of patients. The HCV genotype and subtype of samples were determined using a commercially available assay, VERSANT Hepatitis C Virus Genotype Assay (LiPA) version 2.0 (Siemens Healthcare Diagnostics). Further discrimination was carried out by sequence analysis of the HCV core region.17 Sequences were aligned with references using ClustalW and BioEdit (http://www.mbio. ncsu.edu/BioEdit/bioedit.html).

This study was approved as an investigation into an emerging outbreak of HCV in Victoria under the direction of the then Deputy Chief Health Officer (RL) in accordance with the Public Health and Wellbeing Act 2008 (Vic).

Newly acquired HCV co-infection in MSM was identified in 31 patients (Box 1). Demographics of this group are shown in Box 2. The median ALT level at diagnosis was 580 U/L (range, 52 –1715 U/L). Nineteen patients (61%) had HCV antibody seroconversion, all within 18 months; six patients (19%) had positive polymerase chain reaction (PCR) test results for HCV with a concurrent negative antibody test consistent with newly acquired HCV; and six patients (19%) tested positive for HCV antibodies, with markedly elevated ALT levels. Of the 29 patients who had their HIV viral load measured around the time of HCV diagnosis, 13 (45%) had a detectable HIV viral load. Intercurrent STI diagnoses are listed in Box 3. The distribution of cases over time is shown in Box 4.

Fourteen patients completed the questionnaire. These patients had similar demographics and clinical characteristics to the total group. Frequencies of traditional and novel risk factors for HCV transmission are shown in Box 5. IDU was confirmed to be a risk factor in the minority (five patients), compared with potential sexual modes of transmission (at least 10 patients). Only five patients had been aware of the potential for HCV to be sexually transmitted before their diagnosis with HCV. Twelve patients reported changing their sexual practices since being diagnosed.

HCV genotyping results were available for 29 patients. Genotype 1a was identified in 21 patients, genotype 3a in seven, and one patient had spontaneous clearance of virus. Nine test samples (six HCV genotype 1a and three genotype 3a) were further characterised by sequencing of the HCV core region. Nucleotide sequence alignments showed that two of the HCV 1a samples shared 100% identity with each other, as did the three HCV 3a isolates. At least one patient within each cluster participated in our questionnaire and had not injected drugs in the 12 months before diagnosis with HCV.

This study described the epidemiology of acute HCV in HIV-infected MSM in Victoria and confirmed the importance of transmission risk factors other than IDU. This has direct relevance to testing strategies and prevention messages for HIV-infected MSM.

The 31 cases of newly acquired HCV co-infection represent a relatively small proportion (0.9%) of the total HCV cases statewide. However, among the estimated 5722 Victorians living with HIV at the end of 2010 (about 0.1% of the population), 31 cases of HCV is disproportionately high.18,19 While other Australian studies have reported instances of HIV–HCV co-infection — particularly the Australian Trial in Acute Hepatitis C (ATAHC), with 50 cases nationwide, 23 in MSM with sexual exposure20 — the density of cases in our study’s single jurisdiction is concerning. The sequencing results support the hypothesis that overlapping risk factors contributed to HCV transmission, and related sequences suggest that at least two common lineages of HCV are circulating in this group.

Within this case series, IDU was a relatively uncommon risk factor for HCV acquisition, with 39% of the 31 men reporting any previous history of IDU, and five of 14 patients interviewed confirming IDU in the 12 months before HCV diagnosis. Conversely, sexual risk factors were highly prevalent. Inconsistent condom use with multiple sexual partners was universal among the men who completed the questionnaire, and correlates with the high proportion of STIs in the cluster (15/31 patients). Unprotected sex has become the paradoxical reaction to the success story of anti-retroviral therapy (ART).21 Potentially traumatic sexual practices combined with non-injecting drug use were frequently reported and were probably synergistic in HCV transmission.6 While it is likely that IDU introduces HCV into a sexual network, there is now evidence that sexual transmission in HIV-infected MSM does occur, irrespective of CD4+ lymphocyte counts.9,10,20,22 Serosorting, or selection of sexual partners on the basis of their HIV status, then concentrates HCV transmission within this population.

This study reaffirms the need for periodic HCV testing in HIV-infected MSM, particularly where history-taking reveals high-risk sexual behaviours. Based on our study, we would also argue that any diagnosis of STI in this group should prompt discussion around HCV transmission. Most cases were identified because abnormal LFTs were detected during routine management of ART. Given that HCV infection is commonly asymptomatic, there may be more MSM in the community with undiagnosed HCV who are not aware of the risk to sexual partners. Further, there is a risk of HCV re-infection after treatment or spontaneous clearance, necessitating continued HCV RNA testing to detect possible re-infection.23 This highlights the need for effective education campaigns to circumvent repeated courses of therapy that are both toxic and expensive. There is a much higher response to early treatment with current HCV therapy even in HIV co-infected patients, which again emphasises the need for frequent testing and timely identification and treatment.24

This study has a number of limitations. It is possible that the case-finding strategy may have missed potential patients who underwent their HCV testing elsewhere. The increase in notifications of cases may have been the result of increased testing. An alert was issued by the Chief Health Officer advising of an increase in hepatitis C in HIV-positive men in May 2011, which may have contributed to this.25 The retrospective 12-month period of interest used for the questionnaire may have introduced error resulting from inaccuracy in patients’ recollections of activities undertaken. Finally, only 14 patients participated in the questionnaire. While this group was representative of the cluster on demographic variables, we can only assume that this also applied to sexual risk factors.

There is a pressing need for the development and rollout of health promotion strategies to increase awareness of HCV sexual transmission and risk mitigation in Australia, in conjunction with the affected community. This is particularly important given that we as practitioners have previously generally delivered a message that HCV was not effectively sexually transmitted. We have continued to monitor the incidence of HCV–HIV co-infection in Victoria, and are aware of at least 13 further cases in the second half of 2011 (data not shown). Prospective data collection should measure changes in risk behaviours in response to prevention campaigns. Without intervention, however, the tide of HCV–HIV co-infection has the potential to erode the revolutionary gains made in the health of HIV-infected men. 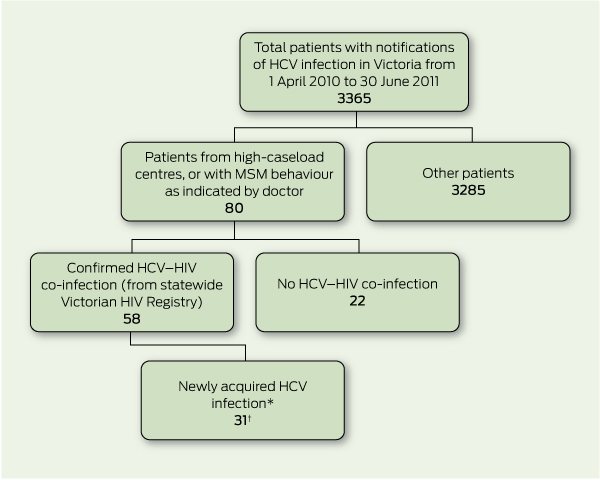 2 Patient characteristics and results of investigations in 31 HIV-infected men who have sex with men who had newly acquired hepatitis C virus (HCV) infection in Victoria, 1 April 2010 to 30 June 2011 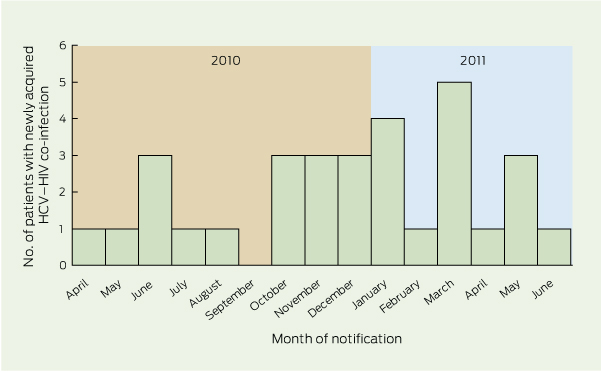 We thank the Partner Notifications Officers at the Department of Health for their assistance in questionnaire design and delivery, and the high-caseload general practitioners who facilitated contact with patients.