We report a case of inoperable metastatic parathyroid carcinoma involving life-threatening hypercalcaemia that failed to respond to standard therapy. Our review of available therapeutic modalities showed a paucity of evidence to guide management of patients with these rare tumours. This is the first report of the treatment of malignant hypercalcaemia secondary to parathyroid carcinoma using denosumab.

A 45-year-old man with no significant past medical history presented with a fractured clavicle and evidence of a radiolucent lesion (brown tumour) within the clavicle on x-ray, characteristic for hyperparathyroidism (Box 1). On further investigation, biochemical analysis showing raised serum calcium and parathyroid hormone (PTH) levels confirmed primary hyperparathyroidism. A thyroid ultrasound showed a 39 × 29 × 32 mm mass in the right lobe, suggestive of a tumour. A staging computed tomography (CT) scan of the neck and chest and a bone scan showed bone changes consistent with hyperparathyroidism throughout the axial and appendicular skeleton. There was no evidence of metastatic disease.

The patient underwent a partial parathyroidectomy and right hemithyroidectomy. Histopathological examination confirmed parathyroid carcinoma. The tumour was invading the thyroid gland and there was evidence of lymphovascular invasion. After the operation, the patient developed persistent hypocalcaemia as a consequence of relative hypoparathyroidism. He had an ionised calcium level of 0.68 mmol/L (reference interval [RI], 1.12–1.32 mmol/L). He was diagnosed with hungry bone syndrome, a common problem following parathyroidectomy. This required treatment with high-dose oral calcium (5.4 g daily) and calcitriol (0.25 μg three times daily). Residual tumour was suspected, as his postoperative PTH level remained elevated, at 13.5 pmol/L (RI, 0.7–7.0 pmol/L). A whole-body sestamibi scan (Tc [technetium]-99m MIBI [methoxyisobutylisonitrile]-830MBq) did not confirm this. He remained under surveillance with 4-monthly clinical review with blood tests and annual sestamibi scans.

One year after his surgery, the patient’s PTH level had risen further, to 52.7 pmol/L. His calcium supplements were ceased, as he was hypercalcaemic (serum corrected calcium, 3.11 mmol/L; RI, 2.15–2.60 mmol/L). Despite ceasing supplementation, his hypercalcaemia worsened over 2 months, to a level of 4.15 mmol/L, with a PTH level of 203 pmol/L and creatinine level of 166 μmol/L (RI, 60–110 μmol/L). On clinical examination, he had two small palpable nodules in the right thyroid bed. A CT scan of the neck confirmed a 1.5 × 2.4 × 1.6 cm mass at the site of the previous surgery.

A positron emission tomography scan showed mildly increased fludeoxyglucose activity at the right thyroid bed, consistent with low-volume residual disease, and intense activity in the left retrocrural soft tissue (Box 2). Biopsy specimens were obtained from both sites and were found to be histologically consistent with parathyroid cancer. The patient underwent a planned resection of the known sites of disease, beginning with a right-sided neck dissection. Thereafter, he underwent a left thoracotomy, which showed more extensive pleural deposits and bulky metastatic disease over the diaphragm and crura, only amenable to debulking. A left pleural effusion, non-malignant on cytology, complicated his postoperative recovery.

After surgery, his PTH level remained elevated, at 112 pmol/L. His hypercalcaemia was difficult to manage despite using intravenous hydration and intravenous zoledronic acid (4 mg). His serum calcium level transiently fell from 3.14 mmol/L to 2.77 mmol/L. Cinacalcet 30 mg twice daily was commenced and titrated to a maximal dose of 90 mg four times daily, with no significant improvement in serum calcium levels.

Given the patient’s failure to respond to cinacalcet, in an attempt to reduce tumour size and function, he received two cycles of chemotherapy with a 3-weekly schedule of cyclophosphamide 500 mg/m2 on Day 1, 5-fluorouracil 500 mg/m2 daily on Days 1–4 and dacarbazine 200 mg/m2 on Days 1–4. On presentation for Cycle 2, his calcium level was 4.37 mmol/L and PTH level 335 pmol/L, indicating no biochemical response. He had symptomatic hypercalcaemia with fatigue, polydipsia, anorexia and renal dysfunction for management. He continued to receive weekly bisphosphonate infusions for management, but, despite this, his serum calcium levels did not fall below 3.0 mmol/L.

We trialled denosumab as a means of achieving control of the resistant hypercalcaemia. We used loading doses, aiming to bring about rapid blockade of receptor activator of nuclear factor kappa B (RANK) ligand. The schedule was taken from a Phase II study of giant-cell tumours of bone, in which loading doses of denosumab 120 mg were given subcutaneously on Days 1, 8 and 15, with monthly maintenance therapy thereafter.1 In our patient, after the initial loading dose, the serum-corrected calcium level dropped to 2.66 mmol/L by Day 8. After a second dose, by Day 15 his calcium level was normal, at 2.33 mmol/L. Calculated urinary N-telopeptide levels were monitored to test for suppression of bone turnover. The baseline level was 431 nmol bone collagen equivalents (BCE)/mmol creatinine (RI, < 65 nmol BCE/mmol creatinine); by Day 15 it fell to < 20 nmol BCE/mmol creatinine, indicating rapid suppression of bone turnover. After two loading doses of denosumab, the patient’s serum calcium remained within the normal range for 4 months. His creatinine level also decreased to 102 μmol/L. Further treatment with denosumab was to be guided by the serum calcium level.

Despite control of the calcium level, the patient’s disease progressed and his PTH level rose to a maximum of 433 pmol/L. He became symptomatic, with a recurrent pleural effusion, anorexia and weight loss. Owing to a paucity of data on effective chemotherapeutic agents, the case was discussed at a departmental case review meeting and a regimen of carboplatin and gemcitabine was suggested, given its broad activity and use in carcinoma of unknown primary site.2 The patient completed six cycles of treatment with relative stability of the pleural effusion and retrocrural disease; however, his PTH level did not decrease. His physical condition deteriorated over 6 months after completion of chemotherapy, and he required one further dose of denosumab for calcium control. The patient died 1 year after his presentation with metastatic disease.

Parathyroid carcinoma is rare, accounting for less than 1% of cases of hyperparathyroidism. It is associated with a high rate of local and distant recurrence. The mainstay of treatment is surgical resection, even in metastatic disease. The disease is often refractory to medical management, leading to morbidity and mortality due to hypercalcaemia rather than metastatic disease; thus, an aggressive approach to resection has been advocated.3 Managing life-threatening hypercalcaemia and controlling a relatively indolent tumour pose a significant therapeutic challenge in inoperable disease.4

The efficacy of cinacalcet in the management of parathyroid cancer-related hypercalcaemia was assessed in an open-label single-arm study of 29 patients.5 Cinacalcet was commenced at 30 mg twice daily and titrated to 90 mg four times daily or until there was a response in the serum calcium. Over the 16-week study period, 62% of patients responded to therapy; the greatest response was seen in patients with the highest baseline calcium levels. PTH levels were also shown to decrease, but this was not clinically significant.

There is limited evidence for chemotherapy in the management of metastatic parathyroid carcinoma. Success using cyclophosphamide, 5-fluorouracil and dacarbazine has been reported, with normalisation of serum calcium and a complete response in pulmonary metastases after 12 cycles.6 There are several other case reports of agents that have demonstrated some efficacy, including dacarbazine as a single agent, the “MACC” regimen (methotrexate, adriamycin [doxorubicin], cyclophosphamide and CCNU [cyclonexyl-chloroethyl-nitrosourea, or lomustine]) and synthetic oestrogen therapy.4

Few strategies to manage resistant hypercalcaemia in parathyroid carcinoma have been published. One case report described immunisation using the bioactive section of PTH in a patient with resistant hypercalcaemia, with rapid improvement in symptoms and serum calcium. Autoantibodies to parathyroid hormone were identified in the patient’s serum within 4 weeks. The authors theorised that they prevented the binding of PTH to its receptors, thereby improving hypercalcaemia. There was no clinical or radiological evidence of tumour regression after 6 months of therapy.7

Denosumab is a fully human monoclonal IgG2 antibody that has a high affinity and specificity to bind RANK ligand, mimicking the effect of osteoprotegerin, which acts to competitively inhibit the binding of RANK ligand and RANK to inhibit osteoclast activation.8 Denosumab has been compared with zoledronic acid in the prevention of skeletal-related events, such as fractures, in patients with advanced malignancies in two randomised trials. In both, denosumab was associated with higher rates of hypocalcaemia and greater suppression of bone turnover markers.9,10 It is currently licensed in Australia for the treatment of osteoporosis and prevention of skeletal-related events in patients with metastatic breast and prostate cancer with bone metastases.

Preclinical data have shown that telomerase is active in parathyroid cancer cells and could be a potential therapeutic target. An in-vitro study of zidovudine, an antiretroviral agent, investigated its use in inhibiting telomerase. Zidovudine accumulated in malignant parathyroid cells in culture, which induced apoptosis. The effect was not observed in the adenomatous parathyroid cells, suggesting this could be considered as a targeted therapy.11 Studies in humans have not yet been done.

Metastatic parathyroid cancer is a rare malignancy that has a limited evidence base to guide management. We report a patient with refractory hypercalcaemia that dramatically responded to the RANK ligand inhibitor denosumab, with rapid suppression of bone turnover within days. Unlike bisphosphonates, denosumab does not require dose adjustment for renal impairment, which is common in patients with hypercalcaemia. Denosumab offered prolonged calcium control with less frequent administration. The management of parathyroid cancer remains a therapeutic challenge, owing to the minimal evidence for effective systemic therapy in patients with inoperable disease. We propose that denosumab should be considered in the treatment algorithm for patients with hypercalcaemia secondary to parathyroid cancer.

1 Plain x-ray showing brown tumour at the distal end of the left clavicle, characteristic of hyperparathyroidism 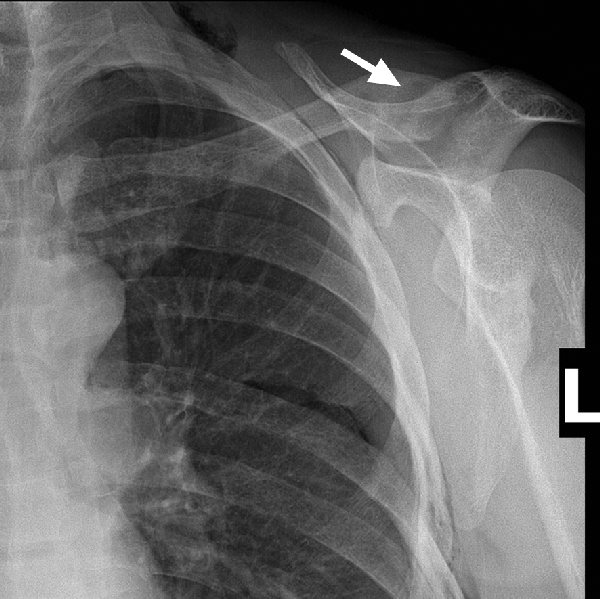 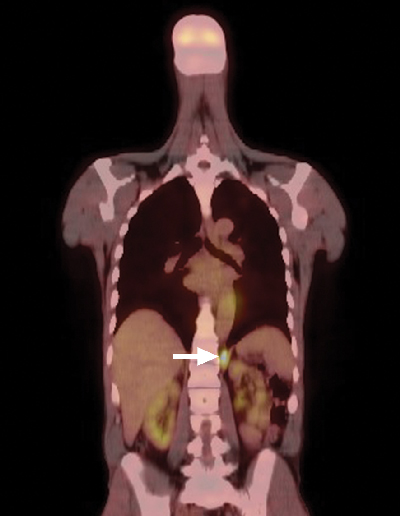