Australian orchids and the doctors they commemorate

Orchidaceae is the largest family of flowering plants. Orchids grow in habitats ranging from subalpine niches to the tropics, and they produce some of the most beautiful, varied and intriguing flowers. Of the more than 1300 genera and 33 000 species, more than 1300 named taxa of orchids, in 193 genera, grow in Australia.1,2

The word “orchid” is from the Greek word orchis (meaning testicle), which reflects the appearance of the root tubers in some species.3 According to the “doctrine of signatures” — a 16th century herbalist philosophy which states that herbs resembling body parts can be used to treat those body parts — orchids were used continuously from preliterate times as aphrodisiacs and as medicaments to restore virility. Theophrastus (c. 372–288 BC) wrote about the medicinal value of orchids, as did Paracelsus (1491–1541) and Carl Linnaeus (1707–1778), the father of modern botanical taxonomy. As a child, Linnaeus recorded details of his personally collected orchid specimens in his notebook, in which he wrote “Orchis from testiculus, through which its effects should occur”.4

Orchid extracts such as vanilla (from Vanilla planifolia)5 and salep (from Orchis mascula and Orchis militaria) are used commercially in ice-cream, confectionery and medicinal flavouring agents.6 Crawley root preparations (from Corallorhiza odontorhiza) are used in folk medicine for their diaphoretic and antipyretic properties.5 In Australia, orchid preparations have been and continue to be used by Indigenous healers to treat diarrhoea and skin infections.7 Lieutenant (not yet Captain) James Cook used powdered orchid root as part of his method for preserving the health of his crew.8

The physical manifestations of orchids, such as their flowers and the medicines and flavourings derived from them, are ephemeral. But the scientific names of orchids endure, and many perpetuate the lives and works of those who have contributed to medicine since the time of Aristotle.9 Here, I describe indigenous orchids of Australia whose scientific names commemorate doctors who worked in Australia, encapsulating a library of Australian medical history. These orchids comprise a monumentum aere perennius (monument more lasting than bronze) — a phrase coined by Horace in Book III of his Odes when referring to his own literary work.

I investigated the origins of the scientific names of Australian orchids by reviewing two parallel and independent resources. The first was a collection of reference texts and journals relating to Australian botany and Australian orchidology (particularly from a historical perspective). The second was a collection of Australian and international botanical and medical biographical texts, as well as oral history that records details of the lives of doctors for whom there is no published biographical information.

As Australian orchid taxonomy is currently in a state of flux, I report the scientific names given in the Australian Plant Census.2 For those not included in this census, I report the names in general use in current orchidology literature.1,10-13

Robiquetia commemorates Pierre Jean Robiquet (1780–1840), a French pharmacist, organic chemist, professor and foundation member of the Académie royale de Médecine (1820). He was the first to describe an amino acid (asparagine) (1806), and he characterised caffeine (1821) and discovered codeine (1832).20

One species out of the 40 species of the Tonsil Orchids, Vrydagzynea grayi, grows in Australia. A rare orchid of the Daintree rainforest in north Queensland, it commemorates Theodore Daniel Vrydag Zynen (fl. 1850), a Dutch pharmacologist and contemporary of one of the most famous doctor–orchidologists, Karl Ludwig Blume (1796–1862).21

The Twisted Sun Orchid, Thelymitra flexuosa, commemorates the Norwich physician and friend of Joseph Banks, Sir James Edward Smith (1759–1828). When he was 25 years old, Smith took the decisive action to buy the great Linnean collection of plants, which were in danger of being lost to science following the death of Linnaeus’s son in 1783. Smith bought them when they were offered for sale in 1784.22 In conjunction with the bishop of Carlisle, he founded the Linnaean Society of London and was its first president. In 1798, he raised the new genus, Diuris, which is one of the first taxa of Pacific orchids to be described. The Lilly Pilly, Syzygium smithii, is another of his six botanical memorials.

Early orchidology in the Asia–Pacific region

The fleshy pseudobulbs (thickened stems that serve as storage organs) of orchids have been eaten and used medicinally by Indigenous Australians for thousands of years.7 The first Australian orchids brought to the attention of Western science were three species of Dendrobium (D. discolor Lindley [described by John Lindley]; D. canaliculatum R.Br. [described by Robert Brown]; and D. rigidum R.Br. [described by Robert Brown]) that were collected by Joseph Banks and Daniel Solander at the Endeavour River between 17 June and 3 August 1770.16 Solander had trained in medicine and botany under Linnaeus in Uppsala (Sweden) and, after 1759, in London (England). One of the plant species named after him is the Australian orchid Orthoceras solandri (also known as Orthoceras strictum).

The first orchids scientifically named in the Pacific were species in the genus Thelymitra J.R.Forst. & G.Forst., a taxon raised and coined by the Forsters — the irascible Johann Reinhold Forster (1729–1798), and his son Georg Forster (1754–1794), who was 18 years old when they left on Cook’s second voyage of 1772 to 1775.23 The Forsters collected Thelymitra longifolia in the South Island of New Zealand in 1772 and published the name of the species in 1776. The Forsters described and named nine new species in what they termed the “Class of Orches” in the South Pacific.24 Georg Forster graduated in medicine in Vilna (now Vilnius, Lithuania) in 1784. Species of Thelymitra, which are known as the Sun Orchids, are found mainly in the south-west of Western Australia.23

Robert Brown, the father of Australian botany, named more species of Australian orchids than any other botanist.14 His reputation as a botanist has tended to overshadow the details of his medical life. Until he was 28 years old, he served as an English military surgeon. While serving as a doctor–soldier in the Fifeshire Fencibles, he used his medical training to study plants. He circumnavigated Australia with Matthew Flinders on the HMS Investigator (1801–1803) during his 3.5 years in Australian waters. In WA, Brown collected 500 new species. He eventually documented 2000 new Australian botanical species, on top of some 33 000 species known from the entire world at the time.25 Among these, he described 120 new Australian species of orchids. In 1810, he published the first volume of his Prodromus florae Novae Hollandiae et insulae van-Diemen, described by another former naval surgeon–botanist, Sir William Hooker, as the greatest botanical work ever.26 It listed 464 genera, a third of them for the first time, and three-quarters of the named species were new to science. Brown also described the movement of microscopic grains from pollen cells on the surface of water, a phenomenon now called Brownian motion.27 Although his death was unnoticed and unrecorded in Australia, three native orchids (Box) endure as his living memorials.15 One of these is the Purple Enamel Orchid (Elythranthera brunonis).

Richard Sanders Rogers was a senior physician and forensic pathologist and an acknowledged international authority on orchids of Australasia. He served as honorary physician at the Adelaide Hospital (1897–1909) and as a member of the Medical Board of South Australia (1910–1940). He also served with distinction as the commanding officer of the 7th Australian General Hospital during World War I.28 He published 29 scientific articles on orchids of Australia and named 82 new species. His many publications include his book An introduction to the study of South Australian orchids, published in 1909, and the section on Orchidaceae in John McConnell Black’s book Flora of South Australia, published in 1922. Two orchids bear his name (Box) — one is Rogers’ Greenhood (Pterostylis rogersii), also known as the Curled-tongue Shell Orchid.

Charles Stanford Sutton was a general medical practitioner. He was an active member of the Field Naturalists’ Club of Victoria from 1900 to 1950), its president from 1915 to 1916, and its librarian from 1924 to 1943. His major publications include three articles in The Victorian Naturalist — “Among the alpine flowers” (1903), “A botanical collector in the Mallee” (1906) and “A botanist at Mount Buller” (1907) — and his books A sketch of the Keilor Plains flora (1916) and Cradle Mountain (Tasmania) and its flora (1923). Sutton was a subalpine specialist and accordingly his name is commemorated in the Alpine Leek-orchid, Prasophyllum suttonii, collected on an expedition he led to Mount Buffalo in December 1902.17

The German-born doctor–expeditioner Hans Herman Behr was appointed professor of botany at the California College of Pharmacy in San Francisco in 1850. He explored the Barossa Valley and Mount Lofty Ranges and, in 1851, published an article titled “On the character of the South Australian flora in general”. Two Australian orchids bear his name (Box) — one is called the Lofty Ranges Spider Orchid (Arachnorchis behrii).

Hugo Flecker, a pioneering Australian radiologist radiotherapist and active member of the Field Naturalists’ Club of Victoria from 1921,29 is commemorated in the names of eight botanical species and the name of the Australian Box jellyfish (Chironex fleckeri). This memorial is balanced by the names of two beautiful epiphytic orchids — the rare Apricot Cane Orchid, Thelychiton fleckeri, which grows in the cloud and mist forests on Mount Finnigan and Mount Fisher in Cape York, and the Slender Sphinx Orchid, Cestichis fleckeri.

Scientific names of living things will be used as long as scientists find it useful to do so. Names change as taxonomists revise plant groupings and there is a proposal to dispense with scientific names, in favour of an alternative system called the PhyloCode. In the past, the doctrine of signatures linked the forms of plants with their supposed therapeutic uses. But the world of binomial nomenclature (which Linnaeus introduced in 1753), allows for the most fitting memorials in medicine and botany. In the scientific names of Australian orchids, the lives of many doctors and botanists endure.

Australian orchids with names that commemorate doctors who worked in Australia 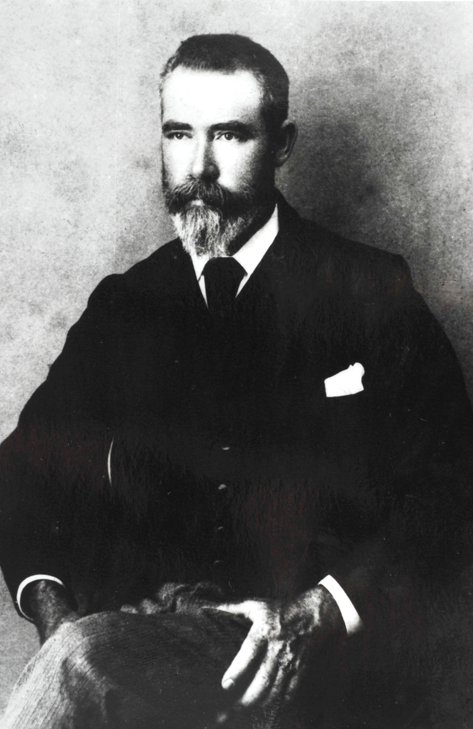 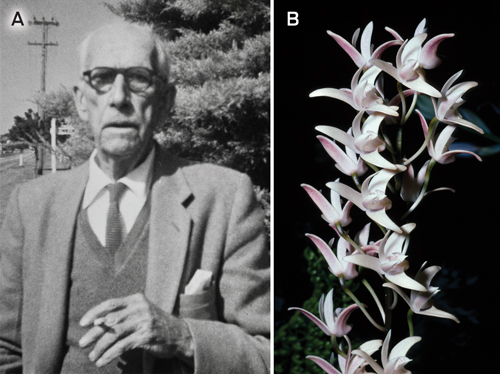 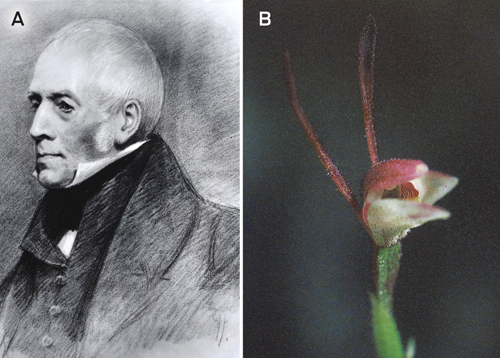 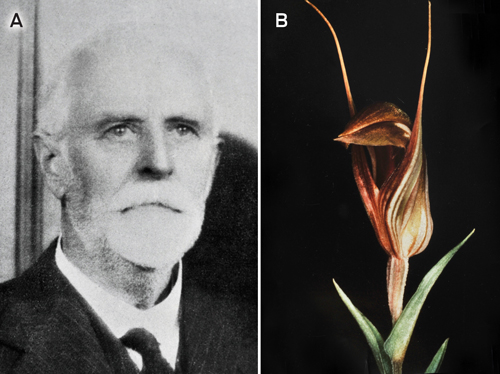 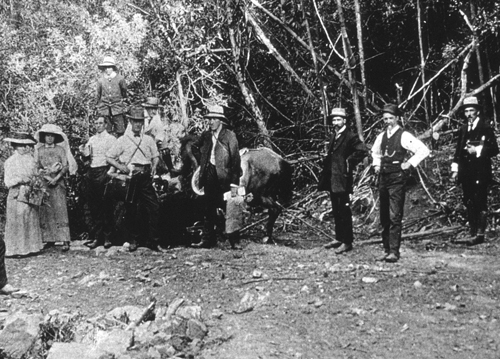 Charles Stanford Sutton (far right) as a leader of a botanical excursion of the Field Naturalists Club of Victoria at Myers Creek, in the Healesville district of Victoria, on 25 November 1911.