He was known to most Australian medical graduates who have worked in Papua New Guinea (PNG) since the 1960s. In 1960, after completing his schooling in Kotaraja in the West Papua region (at the time, a Dutch territory, Netherlands New Guinea), he was one of seven students from the region chosen for medical training in Port Moresby at the newly established Papuan Medical College. Less than 3 years later, Indonesia invaded the West Papua region and it was demanded that they return home. Advocacy by their lecturer in medicine, Anthony Radford, and the Australian politician Sir Wilfrid Kent Hughes enabled them to remain at college, and Adolf graduated in 1965.

As a schoolboy, Adolf had a Dutch penfriend, Wilhelmina van Hulzen, but their exchange lapsed. Seventeen years later, Wila arrived in PNG to work in nutrition, contact resumed and marriage ensued. Their three children are Wisa (a nurse), Nellie (an economist) and Moyai (a doctor).

Adolf pioneered professional advancement in PNG, as the first local graduate to train at an Australian teaching hospital (at Royal Prince Alfred Hospital), the first to complete a Diploma of Tropical Medicine and Hygiene (from the Liverpool School of Tropical Medicine in the United Kingdom), and the first to be appointed to the medical academic staff of the University of Papua New Guinea. He was a member of the council of the PNG Institute of Medical Research and held its chair from 1980 until he retired in May 2012. In 2008, he was made a Member of the British Empire and received an honorary Doctor of Medicine degree from his university.

Adolf’s nearly 40 years of service to PNG medicine as a physician and a teacher provided a remarkable continuity and consistency of leadership through many staff changes. He was humble and generous, willing to accept additional responsibilities without complaint. Medical meetings were enlivened by his keen sense of humour and ready wit. Drawing on a broad awareness of issues in medicine and of local and international affairs, he was always ready with a provocative question or comment.

Adolf died in Port Moresby on 11 November 2012 from pneumonia following a cerebral infarction complicating longstanding diabetes. He was a living library of relevant knowledge and history; his passing leaves a huge gap in PNG medicine. 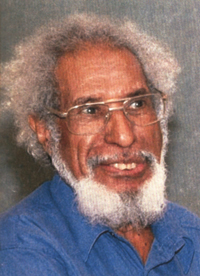