Objective: To describe the 12-month prevalence of verbal or written and physical aggression from patients, patients’ relatives or carers, coworkers and others in Australian clinical medical practice.

Design, setting and participants: An exploratory, descriptive study of cross-sectional survey design in the third wave (March 2010 to June 2011) of the Medicine in Australia: Balancing Employment and Life longitudinal survey.

Conclusions: This is the first nationwide study of workplace aggression from all sources experienced by all subpopulations of Australian medical clinicians. The findings suggest particular risks for younger and more junior hospital-based clinicians, and for IMGs in general practice. A failure to address this important professional and public health concern may contribute to ongoing challenges in the recruitment and retention of medical practitioners in an era of increasing shortages internationally.

This article describes results from the first national study of workplace aggression experienced by the major subpopulations of clinical medical practitioners in Australia. The study aimed to determine the 12-month prevalence of verbal or written aggression and physical aggression from patients, patients’ relatives or carers, coworkers and others external to the workplace. Differences in prevalence by sex, age, postgraduate experience and international medical graduate (IMG) status were also examined.

This exploratory–descriptive study was conducted between March 2010 and June 2011, in the third wave of the Medicine in Australia: Balancing Employment and Life (MABEL) survey. Eight workplace aggression prevalence items were included in questionnaires tailored for GPs and GP registrars, specialists, hospital non-specialists and specialists in training. Questionnaire items were tested in the pilot phase of the survey.12 The sampling frame was the Medical Directory of Australia (MDA), a comprehensive database of 59 144 Australian medical practitioners,13 as accessed in February and May 2010. Of these, 16 327 (27.6%) were surveyed in accordance with the MABEL protocol.14 Invitees comprised contactable respondents from previous waves of the MABEL survey (12 068) and clinical medical practitioners new to or re-entering the MDA by May 2010 (4259). The study was approved by the University of Melbourne Faculty of Economics and Commerce Human Ethics Advisory Group and the Monash University Standing Committee on Ethics in Research Involving Humans.

A range of demographic and other profile data were collected, including doctor type, sex, age, IMG status, and location by state and Australian Standard Geographic Classification of remoteness.15 Years elapsed since medical graduation was also determined. Estimates of the frequency of aggression from patients, patients’ relatives or carers, coworkers and others external to the workplace were elicited with a five-point, ordinal response scale: “Frequently (once or more each week)”, “Often (a few times each month)”, “Occasionally (a few times each 6 months)”, “Infrequently (a few times in 12 months)” and “Not at all”. Workplace aggression was defined in survey questionnaires as:

any workplace aggression directed toward you in the last 12 months while you were working in medicine (ie, any circumstance or location in which you performed your role as a medical practitioner), including:

Physical threats, intimidation, harassment or violence — such as a raised hand or object, unwanted touching, damage to property and sexual or other physical assault.

The profile of respondents (doctor type, sex, age, state and rurality) was compared with the 2010 profile of MDA clinicians. Sampling bias was assessed with the Pearson χ2 test of independence for categorical variables (doctor type, sex, state and rurality) and the independent t test for age. Aggression prevalence data were summarised by percentages. Summary rates of verbal or written aggression and physical aggression were indicated with binomial (Clopper–Pearson) confidence intervals. The statistical significance of differences in distributions of reported aggression by doctor type, sex and IMG status was determined with the Kruskal–Wallis test (corrected for tied ranks). The statistical significance of associations between age, years elapsed since graduation and aggression prevalence was determined with Spearman rank correlation.

A response rate of 60.9% (9951) was achieved, with 57.9% (9449) of invitees indicating that they worked in clinical practice in Australia. Comparisons of the study sample and national profiles are shown in Box 1 (doctor type, State and rurality) and Box 2 (sex and mean age, by doctor type). While statistically significant (P < 0.001), except for mean age for male hospital non-specialists, the differences between the sample and the national profiles suggest only a slight bias toward specialist, Victorian, non-metropolitan, female and younger clinicians.

Age and years since graduation were strongly correlated (ρ = 0.968; P < 0.001) across all doctor types. Both variables, almost identically, were negatively though weakly associated with the reported frequency of workplace aggression from each source in the previous 12 months (Box 5). This pattern was replicated for individual doctor types, but the statistical significance of associations disappeared for hospital non-specialists and specialists in training.

Hospital non-specialists and specialists in training are about 15 to 25 years younger and comprise relatively more female clinicians compared with specialists. They are more likely to be afforded lower status in “a pecking order of seniority”.25 They are also likely to be less skilled or experienced in aggression minimisation and de-escalation, particularly where the perpetrators are more senior personnel or clinical colleagues. Clearly, greater institutional efforts are required to enhance the aggression minimisation skills of doctors who are new to clinical practice, and to reduce both the prevalence and impact of workplace aggression.

IMGs in general practice appear more vulnerable to workplace aggression. While previous Australian qualitative research suggests that some individual cultural and communication issues may serve as triggers for aggression,26 overall there has been a lack of research investigating IMG experiences of workplace aggression. More research is clearly warranted, since IMGs have an important role in efforts to ensure Australia has sufficient medical practitioners to maintain medical care in non-metropolitan communities and areas of workforce shortages.

The importance of workplace aggression in medicine cannot be underestimated. Beyond individual physical and mental health effects,1-4 there is evidence of the greater impact of the more prevalent non-physical forms of aggression on work participation decisions.18 Doctors exposed to workplace aggression have reported a loss of confidence or enthusiasm for treating patients20,21 and increased medical errors.27 A failure to reduce the prevalence and impact of workplace aggression, especially for younger clinicians and IMGs, may also contribute to ongoing challenges in the recruitment and retention of medical practitioners in this era of increasing workforce shortages internationally.28

There are some limitations to this study. Sampling biases may have contributed to the prevalence of workplace aggression being slightly overestimated for non-metropolitan, specialist and female clinicians, and slightly underestimated for hospital non-specialists. However, self-selection bias by those who had experienced aggression was minimised, as aggression items were a small component of the questionnaires. Although a definition of workplace aggression was provided, responses were subject to clinicians’ own perceptions of experiencing aggression from each source. Recall bias was minimised, as questionnaire items elicited estimates of exposure in a range, rather than exact frequencies. Finally, more complex interrelationships between variables, and the assessment of impact and causality, were not investigated in this study.

The results of this national cross-sectional study of Australian medical clinicians indicate that workplace aggression in medicine is a significant professional, occupational safety and public health issue. The outcomes provide important baseline data and an impetus for ongoing research into this phenomenon in clinical medicine, both in Australia and internationally. The research also provides an important body of evidence for legislators, policymakers, health services and the medical profession in developing strategies that may more effectively prevent and minimise work-place aggression in medical practice settings.

MABEL = Medicine in Australia: Balancing Employment and Life. MDA = Medical Directory of Australia, accessed May 2010.13 GP = general practitioner. * P < 0.001 for all subcategories except male hospital non-specialist, which was not significant. 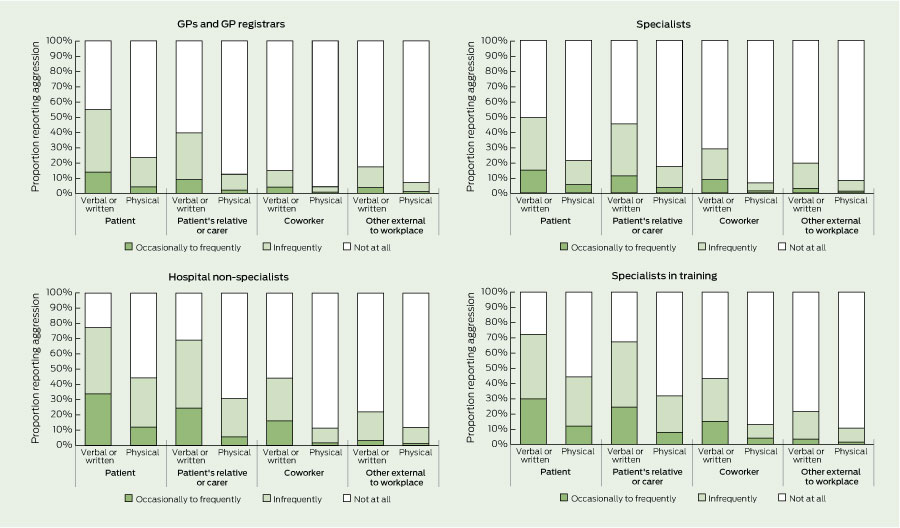 5 Association between medical practitioner age, years since graduation and frequency of workplace aggression within the previous 12 months, by source of aggression, March 2010 – June 2011*