John Greenwell was born on 10 October 1922 in Leura, New South Wales, to Harold and Sarah Greenwell. He was the youngest of four and his father owned a pharmacy in Katoomba. Educated at Katoomba Public School and Sydney Grammar School, he graduated in medicine from the University of Sydney in 1946.

After a residency at St Vincent’s Hospital, Darlinghurst, and a brief experience in general practice in Granville, John accepted the position of Registered Medical Officer at the Royal Hospital for Women (RHW) in Paddington and, in 1950, was appointed Medical Administrator. In 1952, he travelled to London, where he undertook postgraduate studies in obstetrics and gynaecology and obtained membership of the Royal College of Obstetricians and Gynaecologists (RCOG). On his return in 1954, he was appointed General Medical Superintendent of the RHW. In 1956, he married Pauline McLure.

In 1963, he was elevated to Fellowship of the RCOG and, in 1973, was made a Fellow of the Royal Australasian College of Medical Administrators. He was a Foundation Fellow of the Royal Australian College of Obstetricians and Gynaecologists and was the College representative on the Australian Council on Healthcare Standards until his retirement in 1987.

John was a far-sighted administrator who, early in his time at the RHW, saw the appointment of staff specialists as integral to the hospital. During his 38 years at the RHW, John was involved in instituting many interventions that are now accepted as routine. The first medical administrator to admit partners into the delivery ward, he encouraged the rooming-in of infants. He was closely involved in the establishment of epidural anaesthesia for women in labour and the introduction of obstetric ultrasound. Having performed the first exchange transfusion for rhesus isoimmunisation in Australia in 1949, he oversaw the development of intrauterine transfusion for severely rhesus-affected infants. He also oversaw the establishment of the hospital’s neonatal intensive care unit. Throughout his time at the RHW, he continued with clinical practice.

John served the East Sydney Rotary Club for 43 years until he retired from the club in 2007. After increasing ill health, John died on 6 January 2012. He was predeceased by Pauline and is survived by his children Lisa and Robert, and grandchildren Jocelyn, Charlie and Jonathan. 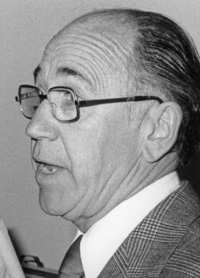