Bob Kenihan was born in Adelaide, South Australia, on 1 February 1923, the son of Raphael Kenihan, a family medical practitioner. He attended Rostrevor College for his secondary schooling, before entering the University of Adelaide Medical School, from which he graduated in 1946. During this time, he excelled at sport, gaining a university Blue in lacrosse, as well as being proficient in cricket, swimming and golf.

After internship at the Royal Adelaide Hospital, he served in the Royal Australian Army Medical Corps (RAAMC) as a member of the British Commonwealth Occupation Force in Japan from 1948 to 1949. This was the beginning of his long association with the RAAMC as a serving member of the Citizen Military Forces, in which he held senior positions in 3 Field Ambulance from 1949 to 1967. He was duly recognised with the award of the Efficiency Decoration and clasp for his meritorious service.

In 1952, Bob completed a scholarship study year at Saint Mary’s Hospital for Women and Children, Manchester, and gained his membership of the Royal College of Obstetricians and Gynaecologists (RCOG) in London in 1953. From 1962 to 1968, he served as the South Australian members’ representative on the Australian Regional Council of the RCOG. He achieved Fellowship of the RCOG in 1970 and was an examiner for the Diploma of the RCOG in the 1970s. In 1979, he was made a Foundation Fellow of Royal Australian College of Obstetricians and Gynaecologists (RACOG).

After working as an Honorary Clinical Assistant at The Queen Elizabeth Hospital and Royal Adelaide Hospital, he went on to faithfully serve Queen Victoria Hospital, and subsequently the Women’s and Children’s Hospital (WCH), with great distinction as an Honorary Obstetrician and Gynaecologist from 1956 to 1971 and then as a Senior Visiting Medical Specialist and Head of the Obstetric Unit from 1971 until he “officially” retired in 1988. In recognition of his dedicated service at the WCH, he was made an Emeritus Obstetrician and Gynaecologist. From 1992 to 1996, he served as a medicolegal officer for the WCH and concluded his association as a member of its Board of Directors in the late 1990s.

In retirement, Bob continued his hobbies of gardening, stamp collecting and being a home handyman at his beloved “Kenwest” in Port Noarlunga.

Bob married Mary Elizabeth Denny in 1949 and they had six children who blessed them with 16 grandchildren and great-grandchildren, with each of whom they formed a special bond. It was with great pride and a sense of history that he learnt that one of his granddaughters had been accepted into medicine at the University of Adelaide.

On 3 February 2012, Bob passed away after a long illness, lovingly cared for by Mary Elizabeth and his family. Jack O’Loughlin AO, past President of the RACOG, delivered the eulogy at Bob’s funeral service and was moved to say: “He was consistent not only in his dealings with his colleagues but also in his commitment to his patients — always compassionate, always professional. Robert Kenihan was a prince of physicians. He graced our profession like few others.” 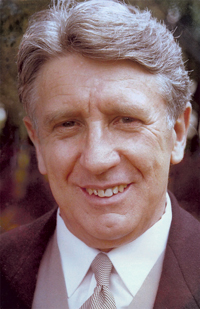