Objective: To evaluate data from an online chlamydia testing program (OLC) developed to increase young people’s access to testing for chlamydia, the most commonly notified disease in Australia and Western Australia, with a high proportion of notifications among young people (< 30 years).

Design and setting: The OLC was launched in February 2010, and our study covers the period February 2010 to June 2011. Without needing to first visit a doctor, OLC participants receive risk self-assessment, education, testing, and, if necessary, referral for treatment, and can complete an online satisfaction survey.

Main outcome measures: Number and proportion of downloaded pathology forms that resulted in a test; demographic characteristics of participants; prevalence of chlamydia; completeness and timeliness of follow-up of positive test results; and participant satisfaction.

Results: More than half (56%) of the 675 OLC pathology form downloads resulted in a test, and chlamydia was detected in 18% (66/377). Of those tested, over half were men (55%), and 71% were aged < 30 years. All participants with a positive test result received appropriate clinical management, with 50% being treated within 7 days of specimen collection. Of the 17% (55/332) who completed an online satisfaction survey, almost all said they would recommend the service to a friend.

Conclusion: Internet-based screening for chlamydia is an effective means of increasing access to testing for young people at risk of sexually transmitted infections and is a valuable addition to opportunistic, clinic-based strategies.

Chlamydia, caused by the bacteria Chlamydia trachomatis, is a sexually transmitted infection (STI) and the most commonly notified disease in Australia and in Western Australia.1 Between 2001 and 2010, the number of chlamydia infections reported to the Department of Health, WA (DoHWA) increased more than threefold, from 2707 notifications in 2001 to 10 249 in 2010.2 As in previous years, 84% of the chlamydia notifications in WA in 2010 were among young people (age, < 30 years), with peaks in those aged 20–24 and 15–19 years (36% and 28% of notifications, respectively).2 As asymptomatic chlamydia infection is common among men and women, infections may not be detected or treated in a timely fashion. This increases the likelihood of disease transmission and the development of complications, such as pelvic inflammatory disease and infertility.3

Increasing the number of people aged 16–25 years being tested for chlamydia infection is a key objective of Australia’s Second national sexually transmissible infections strategy 2010–2013.4 However, several barriers to achieving this increase have been identified, especially among young people with asymptomatic infections. These barriers include costs associated with testing, clinic waiting times, inconvenience, fear of medical procedures, stigma and lack of privacy.5-8 In addition, not all general practitioners in Australia routinely offer chlamydia testing to young people; in particular, men as well as young people in rural settings may be missing out on testing.9

Home-based chlamydia testing has been trialled in several countries as a means of overcoming traditional barriers to testing, with kits advertised and ordered online, or distributed by mail or in the community.10-18 In these models, vaginal and penile swabs or urine samples are taken at home and returned via post. However, uptake has generally been low, limiting the effectiveness of home-based testing. A potential reason for this may be that young people living with their parents, a sexual partner or in shared accommodation are less likely to order or use a chlamydia testing kit at home for fear of arousing suspicion; for example, when receiving an unmarked package in the mail.18

In 2010, the DoHWA established an online chlamydia testing program (OLC) that allows participants to complete a risk self-assessment for chlamydia online and submit a sample for testing at a laboratory without visiting a doctor. The OLC is described in detail in Box 1. Here, we evaluate the OLC from February 2010 to June 2011.

As a Medicare number or other proof of identify was not required for submitting a specimen for testing, participants may have submitted more than one specimen under different names. Thus, it was not possible to analyse the data based on unique individuals.

All participants found to have chlamydia, and one additional participant found to have gonorrhoea, were treated with appropriate antibiotics, and partner notification and post-treatment follow-up were undertaken. The median time from specimen collection to treatment was 7 days, with 94% (62/66) of participants being treated within 14 days; the longest interval of 32 days occurred in a participant who went overseas after testing and was treated on return.

More than half (56%) of the 675 OLC pathology form downloads resulted in a test, and chlamydia was detected in 18%. Of those tested, over half were men (55%), and 71% were young people aged < 30 years. All participants with a positive test result underwent appropriate clinical management, with 50% being treated within 7 days of specimen collection. Among those completing the online survey, satisfaction with the OLC was high and almost all said they would recommend the service to a friend.

The observed proportions of pathology form downloads resulting in a test (56%) and positive tests (18%) were higher than those reported in many other comparable internet-based testing strategies, in which test return rates ranged from 34% to 62%13,19 and positive test results from 3% to 14%.10,13,15,17,19,20 Our results, coupled with the fact that 71% of OLC participants were < 30 years of age, indicate that this service is being used by young people who are actually at risk of STI, rather than by the “worried well”. They also suggest that the OLC method of internet-based testing may be more appealing to young people, as it eliminates some of the concerns preventing them from accessing traditional STI testing strategies,5-8 and therefore is an effective means of increasing testing rates among this cohort.

Another strength of the OLC is its potential to reach traditionally difficult-to-access populations for chlamydia testing and sexual health education. In Australia, only 1.6% and 6.3% of 15–24-year-old men and women, respectively, are opportunistically tested for chlamydia by their GP.9 The relative overrepresentation of males among OLC participants suggests that this method of accessing testing is acceptable to young men. The requirement to complete an online risk self-assessment before accessing the test request form also provides an opportunity for participants, especially those who are less likely to access health care (such as young men), to learn about, or be reminded of, behaviours and symptoms associated with chlamydia and other STIs.

Completeness of clinical management for all participants with positive test results indicates that participants were serious about getting tested and willing to provide their correct contact details on an online pathology form. The median time from specimen collection to treatment of 7 days was comparable with the range of 5–7 days reported from Australian and overseas sexual health clinics.21,22

Limitations of our study include the fact that only 17% of participants completed the satisfaction survey, and that the data could not be analysed by unique individuals because participation did not require proof of identify.

The internet is an important source of sexual health information among young people in Australia,23 and 45% of OLC participants found out about the program through an internet search. Internet-based chlamydia screening strategies are competitively cost-effective in comparison with traditional clinic-based screening approaches.24 However, a cost-effectiveness analysis was outside the scope of our study.

The accessibility and effectiveness of the OLC may therefore increase, as the popularity of the internet as a sexual health information resource also increases over time. Promotion of the OLC using internet-based social media sites to increase uptake may be considered in the future.

The results of our study demonstrate that internet-based screening for chlamydia is a highly effective means of increasing access to testing among young people at risk of STIs and is a valuable addition to traditional opportunistic, clinic-based strategies.

2 Online chlamydia testing program (OLC) — number of downloads of test request forms and pathology tests performed, and proportion of downloaded forms resulting in a test, by month, February 2010 to June 2011* 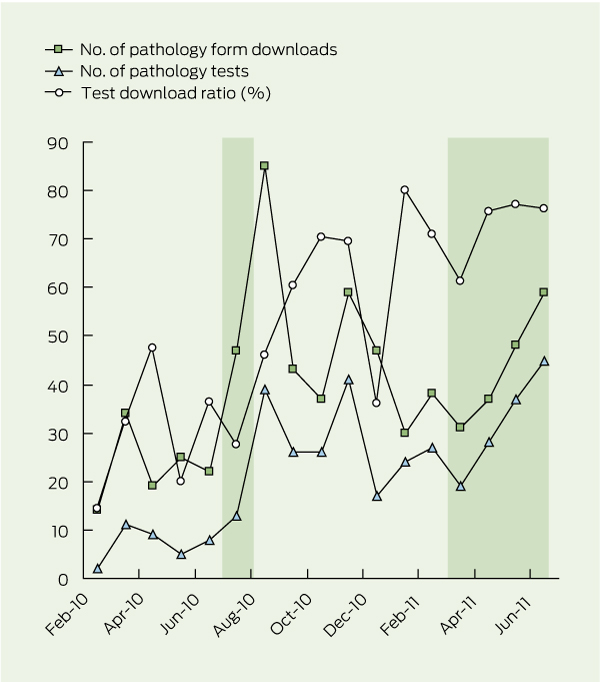 * Shaded areas indicate periods during which a mass media campaign was conducted to raise awareness of the program (25 July to 7 August 2010 and March to June 2011).

3 Chlamydia prevalence in an online chlamydia testing program, by demographic characteristics of participants and self-reported reason(s) for testing, February 2010 to June 2011

We thank Melanie Lau for undertaking the Poisson regression component of data analysis.