Sir Keith Jones, who died on 2 March 2012 in his 101st year, had a long and distinguished medical career, during which he gave service to the medical profession through the British Medical Association in Australia and, later, in various capacities, the Australian Medical Association (AMA) after its formation in 1962. He was President of the AMA from 1973 to 1976 and Chairman of the Board of the Australasian Medical Publishing Company, publisher of this Journal, from 1976 to 1982.

Keith was born on 7 July 1911 in Narrandera, New South Wales. He demonstrated both his intellectual capacity and physical stamina on a scholarship at Newington College, where he finished as dux and won prizes in mathematics and chemistry. In athletics, he won the 880 yards and mile championships and was equal first in the hurdles. Later, as a medical student at the University of Sydney, he won a Blue for athletics in 1929.

After graduating in 1933, his first exposure to general practice was in a lodge practice in Portland, NSW. After marrying Kathleen Abbott in 1936, he ran a general practice in Pambula on the south coast of NSW and became secretary of the local medical association. The couple lived in a house built by Syms Covington (who worked with Charles Darwin and was known as “Mr Darwin’s shooter”).

Before World War II, he joined the Australian Army Medical Corps and was in the Army Reserve. In 1941, he arranged for a locum at his general practice and enlisted full-time in the Australian Imperial Force — about 6 weeks before Pearl Harbor.

Two tragedies overtook him during the war. In 1943, Keith declined to sail with his younger brother Gordon (also a doctor) to the war zone in New Guinea because he did not think two brothers should undergo the same risk in wartime and because he was subject to seasickness. Keith went north by train, but Gordon perished when the Japanese sunk the hospital ship Centaur off the Queensland coast.

Then, in 1944, when Kath was hosting the NSW Premier at a fundraiser for the war, her evening gown caught fire as she was washing up beside a kerosene lamp. She sustained severe burns to her trunk and arms, and Keith was recalled home from New Guinea to find her barely alive. He applied what he had learned in the Army Medical Corps about burn management, and Kath survived. When she was fit enough to make the journey, Kath was brought to Sydney for nearly 5 months of further hospital treatment.

Keith took on many roles, not only with the AMA but also as Chief Medical Officer of the NSW State Emergency Service, founder of the Medical Benefits Fund of Australia in 1947 and member of the NSW Medical Board from 1971 to 1981. He was an honorary surgeon at Manly Hospital and established its emergency ward in 1975.

In Sydney, the Joneses quickly acquired a wide circle of friends. Keith established a network of contacts that proved invaluable during his presidency of the AMA during the Whitlam years and the introduction of Medibank. At this time, his shrewdness and political skills were invaluable to the AMA.

In 1976, Keith received the AMA’s highest honour, the Gold Medal and, in 1980, he was made Knight Bachelor for his services to medicine and medical administration.

Kath, a talented artist who had attended the Julian Ashton Art School as a young woman, had resumed her involvement with art. Through her, Keith met many notable artists, and together they bought paintings that became a feature of their home. In 1979, Keith became Chairman of the Manly Regional Art Gallery and Museum, a position he held until 1984, when he moved to the retirement village at Bayview Gardens. In their private life, he and Kath enjoyed attending concerts, opera and ballet. Kath’s health eventually deteriorated and, in 2002, she died at the nursing home at Bayview Gardens.

Keith was a remarkable human being. Even in his last years, when affected by illness and frailty, he continued to welcome and enjoy the company of friends. His funeral at St Matthews Church in Manly was packed with friends, past patients, residents of Bayview Gardens and many of those whose lives he had touched and who held him in high regard. He is survived by his sons Stephen, Richard and Robert. 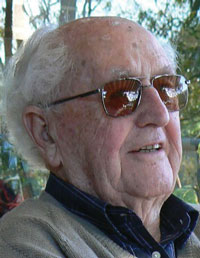