Objective: To assess the extent of diagnosed and undiagnosed pelvic inflammatory disease (PID) in Aboriginal women in remote central Australia.

Results: Of 655 medical records reviewed, 119 women (18%) presented 224 times with lower abdominal pain. Recommended investigations to diagnose PID were infrequently undertaken: bimanual examination (15 cases [7%]); testing for gonorrhoea and chlamydia (78 [35%]); and history taking for vaginal discharge (59 [26%]), intermenstrual bleeding (27 [12%]) and dyspareunia (17 [8%]). There were 95 presentations (42%) consistent with guidelines to diagnose PID, most (87 [39%]) based on symptom profile and history. Of these, practitioners made 15 diagnoses of PID, and none had the recommended treatment documented.

Conclusion: Pelvic inflammatory disease occurred frequently among Aboriginal women in central Australia during the study period but was vastly underdiagnosed and poorly treated. Undiagnosed or inadequately treated PID leads to poorer reproductive health outcomes in the long term. Increased awareness of PID symptoms, diagnosis and treatment and a revision of the guidelines is needed to improve detection and management of PID in this high-risk setting.

Pelvic inflammatory disease (PID) is associated with severe reproductive sequelae, including ectopic pregnancy and tubal factor infertility.1,2 It has an infectious origin, and chlamydia and gonorrhoea are important causes of PID in populations where sexually transmissible infections (STIs) occur at high levels.1,3

Early detection and effective management of PID in primary care settings can prevent complications and hospitalisation.4 Under Australian and international clinical guidelines,5-7 clinicians are encouraged to have a high index of suspicion and a low threshold for treatment when a young woman presents with lower abdominal pain, after exclusion of other causes. Treatment includes a 2-week broad-spectrum antibiotic regimen to cover the likely causative pathogens.

In the Northern Territory, hospitalisation for acute PID occurs at nine times the rate among Aboriginal and Torres Strait Islander women, compared with non-Indigenous women,8 and many remote communities have been found to have an increased prevalence of bacterial STIs.9 These findings suggest that Aboriginal women may not be receiving effective primary health care for diagnosis and treatment of PID. To assess the extent of PID and its management in remote primary health care centres, we undertook a retrospective study of women presenting with lower abdominal pain, which is the most common symptom of PID.

The study was conducted in five primary health care centres in remote central Australia, where high prevalences of gonorrhoea and chlamydia have been recorded in community-wide STI screening programs.9 Participating services included government and Aboriginal community-controlled facilities. Health care in these centres is routinely provided by remote area nurses (RANs), with medical advice available by telephone; general practitioners, who attend monthly; and obstetrics and gynaecology health professionals who provide a 6-monthly clinic. Few centres employ a full-time GP. At the time of the study, these services used a combination of paper-based and electronic systems to record patient information.

We examined all available medical records of resident Aboriginal women aged 14–34 years, to identify all instances of women presenting with lower abdominal pain from 1 January 2007 to 31 December 2008 at participating centres. We excluded women for whom gastroenteritis, trauma, miscarriage or pregnancy (including early labour) were documented as the cause of lower abdominal pain.

For each presentation, we obtained information including:

In addition to reviewing the medical records at the centres, we obtained information on gonorrhoea and chlamydia testing conducted in the participating centres from a database at the NT Centre for Disease Control, which receives all results of STI testing direct from pathology laboratories.

Presentations with documentation that met the guideline criteria, but that had not had a PID diagnosis documented in the medical record, were considered undiagnosed PID. For presentations in which PID was diagnosed, we assessed practitioner adherence to the recommended PID treatment (Box 2),10,11 and calculated the proportion of presentations with a documented diagnosis of PID for which the correct treatment was prescribed.

Proportions, means and medians were used to summarise the characteristics of presenting women, practitioner types, assessments undertaken, diagnoses made and treatments administered. All analyses were performed using Stata, version 10.1 (StataCorp).

Of the 95 presentations, most (65) were managed by an RAN only, seven were referred to a GP, six were seen by a GP only, six by an Aboriginal health worker only, four by a sexual or women’s health specialist only, and in seven presentations, the practitioner type was unknown. The rate of diagnosis did not differ by practitioner type (data not shown).

Correct treatment for PID, as specified in guidelines, was not administered in any of the 95 presentations (54 women) documented as having met the criteria for PID. Of the 35 presentations for which a PID diagnosis was recorded, none were documented to have received the recommended treatment (Box 2). In 12, correct medications were administered but either one was omitted or the wrong dose, duration or frequency of medication was prescribed; in 18, a single dose of azithromycin, amoxycillin and probenecid (the recommended syndromic treatment for gonorrhoea and chlamydia) was recorded; in four, pain relief only was recorded; and in one presentation, no treatment was recorded (data not shown).

Our study is the most comprehensive assessment undertaken of PID diagnosis and management among Aboriginal women. In a community sample, we found that around one in 10 women in the age group at highest risk for PID presented to a primary health care centre with symptoms and investigation results consistent with PID at least once in a 2-year period. Most presentations were not investigated according to clinical guidelines for PID. As a result, cases likely to be PID were frequently missed and those that were detected were not treated according to guidelines. These episodes represent missed opportunities to prevent the long-term adverse reproductive outcomes associated with PID.

Our study is by no means the first to find that PID management presents a challenge in primary care. An Australian study in an urban sexual health clinic found substantial variation among doctors in the number of PID diagnoses made compared with diagnoses of genital warts,12 a variation probably attributable to underdiagnosis of PID by some practitioners. A study in the United States reviewed emergency department records and found that only one-third of patients diagnosed with PID were prescribed antibiotics according to guidelines.13

Given the very high levels of PID indicated in our study and in earlier research from the NT,14,15 it is important to consider the reasons for the lack of guideline adherence observed in this study. Although provision of better or more accessible information has improved guideline adherence internationally16,17 it would probably not, on its own, change the situation markedly in central Australia, where PID-related education sessions have been widely available to both GPs and RANs for the past decade, as part of in-service training, and guidelines prompt clinicians to “think PID” in all relevant sections.10,18

A greater impact on PID management may arise through rethinking the guidelines to better reflect the clinical realities of remote primary health care. The current guidelines for diagnosis begin with the implication that a definitive diagnosis requires a bimanual pelvic examination, a procedure that many remote GPs and RANs may not be comfortable to readily perform, either because they do not have the training, or, if they do, they have limited recent experience. Furthermore, the individual clinical signs and symptoms stated in the guidelines lack sensitivity and specificity.19

A more pragmatic approach to PID diagnosis in this high-risk setting is based on the presence of lower abdominal pain, after the exclusion of other causes in sexually active women aged 14–34 years. Additional information that would be of value includes younger age and background community STI prevalence, rather than specific signs and symptoms20 or individual sexual history. While this strategy would result in some women being unnecessarily treated for PID, it is consistent with the requirement for a high suspicion for detecting PID and a low threshold for diagnosis and treatment. It may also reduce the extent of delayed care which is associated with an increased risk of infertility and ectopic pregnancy.21

We acknowledge the broader challenges of working in remote primary care; the frequent staff turnover and multiple competing health priorities are well documented and have undoubtedly contributed to the gaps in PID management that we have identified. We suggest developing further clinical decision support in the form of pathways for the management of lower abdominal pain. In addition, the recent development of prompts and automated pathology and treatment pathways for PID within the patient management systems in the NT may also lead to improved management.

It is important to note that we did not review cases in which lower abdominal pain was not mentioned in the medical records. Some of these may have been additional missed opportunities for PID diagnosis. Furthermore, we assessed management as documented in the medical record, so did not record care that was provided but not documented. These methodological limitations mean that our findings should be interpreted with a degree of caution, even though they appear to be strong.

Ultimately, an improved ability to detect and manage PID in remote communities will reduce the high rate of hospitalisation for acute PID among Aboriginal women in the NT, and contribute to reducing serious reproductive sequelae. This change will require increased awareness, symptom recognition and revision of the current guidelines10 to reflect the reality of the remote situation. In addition, improving access to and delivery of a comprehensive sexual health program to help prevent bacterial STIs is imperative if we are to reduce the extent of PID. Until this is achieved, the reproductive health of Aboriginal women in central Australia will continue to be at risk.

1 Criteria for diagnosis and treatment of pelvic inflammatory disease according to the clinical guidelines for Northern Territory remote health practitioners, 2007–200810,11

If a bimanual examination is conducted:

If a bimanual examination is not conducted:

4 Proportion of presentations with recommended clinical assessments documented, presentations that met guideline criteria for diagnosing PID, and those with documented diagnoses of PID 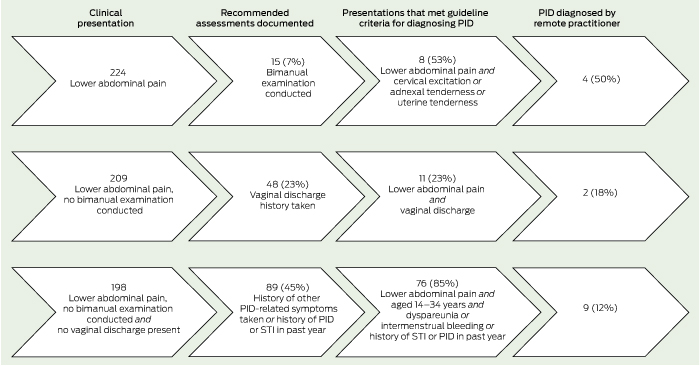