Objective: To evaluate the effect of the State of Origin rugby league series on the number of emergency department (ED) presentations in Queensland.

Design and setting: Retrospective analysis of Emergency Department Information System data from 25 Queensland EDs for game days and matched control days during the annual State of Origin series from 2005 to 2012. The Queensland team won seven of the eight series in this period.

Conclusion: We found that the State of Origin series was associated with fewer ED presentations on game days. We believe these results have broader implications for workforce planning and resource allocation.

Emergency department (ED) attendance is often unpredictable. There are some recognised underlying patterns, such as increased numbers on weekends or during influenza season, but the day-to-day variation can be quite pronounced, posing a significant challenge for ED staffing.

The impact of major sporting events on health and health care utilisation has been studied, with varying results. Some studies demonstrated a decrease in ED attendance,1-5 some no effect,6-9 and others an increase in workload.10-12 In the United States, women were more likely to attend the ED during World Series baseball games, whereas male attendance was reduced.13 Sporting events have been associated with increased rates of cardiovascular disease in some studies,14,15 but not others.3,5,6,16 Suicidal behaviour17-20 and assaults21,22 have also been associated with major sporting events.

There are few published data in the Australian setting, where much of the population is considered to be passionate about sport. In particular, no study has described the effect of rugby league on ED census or investigated the effect of televised sporting events on the Queensland population. Anecdotally, our experience has been that ED presentations seem to decrease when major sporting events are televised. The contradictory evidence prompted us to undertake this study, to explore the effect of the National Rugby League (NRL) State of Origin series on Queensland EDs. This may have implications for workforce planning and staffing.

The State of Origin series is an annual representative event between the rival states of Queensland and New South Wales. Rugby league is the most popular spectator sport in these states,23 and the State of Origin series is arguably the most important event on the rugby league calendar. The three-game series involves NRL players representing the state in which their first professional football club was located. The three games are played on non-consecutive Wednesday evenings during winter. They are broadcast on public television and run for around 2 hours from 8 pm, with the telecast usually starting 30 minutes earlier.

Queensland has a population of more than four and a half million people.24 The majority reside in the south-east corner of the state, with its two largest cities being Brisbane and the Gold Coast. The population is served by a public hospital system, with free access to emergency care available throughout the state.

Since 2005, the Emergency Department Information System (EDIS) has been sequentially introduced to EDs in Queensland (present in three EDs in 2005, eight in 2006, 17 in 2007 and 25 from 2008). This system collects information related to patients and the services they receive while in the ED. We obtained EDIS data to compare variations in ED usage between game days and non-game control days for 2005 to 2012. Control days were selected to account for the day of the week and seasonal variation in presentations. They were the three Wednesdays leading up to the first State of Origin game, the four Wednesdays between the first and third games (ie, two before and two after the second game), and the three Wednesdays after the third game. Information retrieved included patient demographics such as sex and age, presentation time and date, hospital attended, triage category and International Classification of Diseases, 10th revision (ICD-10) diagnostic code.

Of the State of Origin series from 2005 to 2012, Queensland has won the past seven (15 of the 24 games), with NSW winning the first year in this study. The third game played each year decided the outcome of the series, except in 2010 when Queensland won all three games.

The study was approved by the Townsville Health Service District Human Research Ethics Committee as a low- or negligible-risk project (HREC/12/QTHS/112).

The primary analysis compared the number of patients presenting to Queensland EDs on 24 State of Origin game days with the number presenting on 80 control days between 2005 and 2012. A series of binomial tests was conducted and P values were derived, assuming the distribution of presentations conformed to the 24 : 80 ratio.

We assumed that, despite increasing population and increasing attendance at EDs, the total numbers presenting on all game days and all control days would represent the outcome of Poisson processes. We excluded data from EDs in the year that they first adopted EDIS if the date of adoption did not include all game and control days.

Patient characteristics are summarised in Box 1. Significant differences were found for all age groups, except for patients over 60 years of age. Both males and females were significantly less likely to present on game days. A χ2 analysis comparing males with females indicated this was particularly so for males, although this effect did not reach significance (P = 0.06). Significant differences were also found across triage categories 2–4, with only patients in triage category 1 (requiring immediate intervention) and category 5 (non-urgent cases) presenting in similar numbers on game and control days. Reductions in presentations were seen across most ICD-10 diagnostic groupings. An analysis comparing individual sites with the number expected from the statewide total found no statistically significant variation (P = 0.08).

Box 2 shows the mean ED census on game and control days for the hours surrounding the State of Origin broadcast. Binomial tests indicated there were significant differences at each hour from 6 pm to midnight. The hours where this was least notable were during the 2 hours preceding kick-off, and at 2 hours after the game finished. The pattern was reversed after 11 pm, with proportionally more patients presenting to EDs on game days compared with control days.

This is the first study to report the influence of a major sporting event on ED census in Queensland. Our results show that ED presentations decreased during the game, and increased after the game, with an overall daily reduction.

These results are consistent with some of the literature. In the US, the Super Bowl football championship was associated with a significant reduction in ED census,1 while another study showed five fewer male registrations on football, baseball and basketball game days.2 In Canada during the 2010 Winter Olympics ice hockey final, EDs had 17% fewer patients per hour during game time, particularly for adult men with a low triage category.3

Not all studies have found similar results. Two studies in Northern Ireland found no effect of sporting events on a district hospital ED6 and a paediatric ED.8 An English study found no association with match days in the 1996 European Football Championship,7 and there was no significant effect on a poison information call centre during the 2010 Fédération Internationale de Football Association (FIFA) World Cup in South Africa.9 Other studies have found an increase in workload. In Spain, televised soccer games were associated with a 19.8% rise in demand for emergency care,11 and in Edinburgh, the opening game of the 1998 FIFA World Cup was associated with an increase in ED attendance.12 These differing findings suggest that our results, although significant, can perhaps not be generalised outside of rugby league fans in Queensland.

Our results showed that presentations increased after the telecast. Possible reasons for this include alcohol-related violence and injury, a “catching up” of presentations delayed by the game, or presentations precipitated by the game. A study in both English and Australian EDs on the effect of the 2003 Rugby World Cup Final, played between England and Australia, found attendance was down before kick-off in both countries, but increased after the game only in England, whose team won the game.25 This effect is likely to be complex and may involve expectations, team performance, time of day, weather and other factors.

Unlike some studies, our data did not show a statistically significant difference in presentations with ICD-10 codes for diseases of the circulatory system. In Munich during the 2006 FIFA World Cup, cardiovascular events were 2.66 times more likely on the German team’s game days than on control days, including a 2.49-fold increase in ST-elevation myocardial infarction.14 In the Netherlands, mortality from cardiovascular disease increased by a factor of 1.51 in men on the day the Dutch team was eliminated from the 2006 European Football Championship (an excess of 14 deaths).15 The authors hypothesised that this may have been caused by a combination of increased mental and emotional stress, alcohol intake, overeating and excessive smoking. In contrast, a study in Sydney found no significant increase in cardiac event risk associated with two stressful sporting events: an Australian Football League (AFL) grand final and a national soccer penalty shoot-out.16 As the local teams won in both cases, these authors suggested that adverse health events associated with stressful sporting events may be confined to supporters of the losing team. Unfortunately, with Queensland’s recent dominance in State of Origin, we did not have sufficient data on NSW victories to examine this theory further. An exploration of NSW ED data may be revealing.

Our data showed a statistically significant decrease in presentations with ICD-10 codes for injury and poisoning on game days. In contrast, during the 2010 FIFA World Cup, there was a 37.5% increase in assault attendances in the northwest of England when England played,21 and there were more trauma admissions in Ireland during the 2002 FIFA World Cup when Ireland played.10 In an Australian study, a single ED reported attendance for assault was 1.39 times more likely on days when the local AFL team won.22 Unlike many major sporting events, State of Origin is played on mid-week evenings, and there may have been an increase in trauma presentations the next day.

The retrospective use of data was a study limitation. Also, we were unable to examine ED presentation variations related to Queensland losing the State of Origin series as this predated the introduction of EDIS. Information about the repeated effects of losing State of Origin may inform the development of resilience programs, which could be trialled in NSW.

We also did not perform formal subgroup analysis, which may identify age groups with specific ICD-10 codes whose presentations have significantly increased or decreased. Identification of these groups may allow for targeted interventions, such as community education programs about the importance of rugby league and the State of Origin series, or regular access to televised replays, respectively.

The implications of our findings are that ED staffing could be marginally reduced during State of Origin, particularly around game time. However, an increase in workload is to be expected as the night-shift begins.

In conclusion, we found that the annual State of Origin series between NSW and Queensland rugby league teams reduced ED presentations by 4% in Queensland. We believe these results have broader implications for workforce planning and resource allocation. 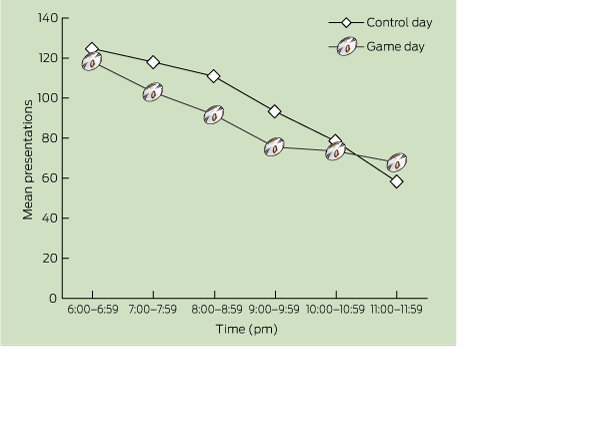 * Games run for around 2 hours from 8 pm, with the telecast usually starting 30 minutes earlier.

We would like to acknowledge the support of Sue Donnelly and Jean Sloan for assistance with data retrieval and arrangement. We would also like to thank the Queensland Emergency Medicine Research Foundation for its ongoing support of research capacity building in the Townsville Hospital Emergency Department.