Design, setting and participants: Active GBS surveillance (cases assessed by two neurologists according to the Brighton criteria) from 30 September 2009 to 30 September 2010, conducted at 10 hospitals in Victoria, Australia.

Main outcome measures: The RI of GBS in the risk window of 0–42 days after vaccination.

Conclusions: This is the first published study reviewing GBS after a trivalent and/or monovalent influenza vaccine containing the pandemic (H1N1) 2009 strain, with only a small proportion of GBS cases occurring after influenza immunisation. H1N1-containing vaccines were not statistically associated with GBS, but this study could not exclude smaller increases in the RI. Active surveillance of adverse events following immunisation is required to maintain public and health care professional confidence in mass vaccine implementation programs.

The administration of pandemic (H1N1) 2009 influenza A vaccine as part of the pandemic response presented challenges for vaccine safety authorities internationally. The monovalent H1N1 vaccine used in Australia was an egg-culture-based, inactivated, split-virion vaccine, with a demonstrated safety profile similar to that of the seasonal trivalent influenza vaccine (TIV).1 Postmarketing active surveillance through Phase IV clinical trials is required for potential rare adverse events following immunisation (AEFI), such as Guillain-Barré syndrome (GBS).2

In 1976–1977, H1N1 immunisation was associated with GBS in the United States.3 A relative incidence (RI) of 7.6 (95% CI, 6.7–8.6) was reported. This correlated with an estimated excess of nine cases of GBS per million vaccinations in the 42 days after immunisation. Two subsequent studies using the United Kingdom General Practice Research Database (1990–2005) found no association between influenza vaccine and GBS.4,5 A Canadian study between 1992 and 2004 demonstrated a small but statistically significant temporal association between influenza vaccination and subsequent hospital admission for GBS (RI, 1.45; 95% CI, 1.05–1.99), but reported no increase in GBS at the population level after a mass influenza vaccination in Ontario beginning in 2000.6 The estimated frequency of influenza illness-related GBS is four to seven times higher than the estimated frequency for influenza vaccine-associated GBS.7

A literature review (1950–2008) found that, with rare exceptions, associations between vaccines and GBS have been only temporal with little evidence to support a causal association.8 Challenges for studies examining the epidemiology of GBS include difficulties in case ascertainment and diagnostic uncertainty in identified cases. Additionally, in the absence of influenza vaccine registries, there is often uncertainty in determining the number of vaccines administered. Our study aimed to explore any potential association between monovalent H1N1 vaccine and/or H1N1-containing TIV, and the occurrence of GBS.

Two neurologists, a hospital site neurologist and a study investigator (L K or V R-C), confirmed the diagnosis of GBS according to the Brighton Collaboration definition (Box 1).2 Reviewers were blinded to vaccine history. Cases identified retrospectively were interviewed and additional information was collected from the patient’s medical record and the patient’s general practitioner. The Australian Childhood Immunisation Register was accessed to obtain immunisation information for children under 7 years of age.

The self-controlled case series (SCCS) method is an established method to assess vaccine safety9-12 (see the accompanying commentary by Hawken and Wilson [page 578]). It tests the null hypothesis that the incidence rate of events (incident GBS cases) is the same during a set period (risk period) after an exposure of interest (H1N1-containing vaccination) compared with the rate outside of this risk period. The method has the advantage of only requiring cases and of implicit control for confounding by non-time-varying variables.

As in previous studies, it was assumed that if vaccination was associated with an excess risk, GBS would present within 42 days.4,13 The background rate was adjusted for temporary delays in vaccination following GBS diagnosis by removing a 28-day prevaccination period. The analysis included the time-varying variables of trivalent and monovalent H1N1 vaccine, as well as month administered, and assumed that incidence followed a Poisson distribution conditional on the number of events that an individual experienced. We used standard and pseudolikelihood methods. The pseudolikelihood method was used to allow for the vaccine being contraindicated following the GBS diagnosis.14 The primary analysis included first episodes of confirmed cases (Brighton level 1–4), excluding those with incomplete immunisation history. Sensitivity analyses included: dropping the monthly adjustment; using 2-week risk periods (0–13, 14–27 and 28–42 days); including second episodes; restricting to cases of higher certainty (Brighton level 1–2); including cases not confirmed as GBS; and including cases without a complete immunisation history.

A sample size calculation was undertaken before the study.15 Assuming a 0–42-day risk “window” during an observation period of 1 year where 20% of the population were vaccinated, 60 participants were required to demonstrate an RI of 8 (as documented in 19763) with 90% power, allowing for 30% misclassification.

We reviewed the Victorian GBS admissions (2004–2009) and identified the 10 participating hospitals that admitted about 60% of the state’s GBS cases (personal communication, H C). Statistical calculations were performed using Stata, version 10 (StataCorp). The human research ethics committee at each participating hospital approved the study.

Sixty-six cases of probable GBS were identified in the 12-month study period (Box 2). Three cases were excluded, leaving 63 GBS episodes in 62 individuals. Of these, nine were excluded, as on review they did not meet diagnostic criteria for GBS. Four further confirmed cases were excluded, as the date of onset of symptoms predated the availability of the monovalent H1N1 vaccine. In six cases, data were only available from the hospital medical record (ie, neither the patient nor primary care physician were available). These cases with incomplete immunisation histories were excluded from the primary analysis, leaving 44 cases.

Active surveillance in Australia for GBS following pandemic (H1N1) 2009 influenza A immunisation was crucial, given the increased risk found in the US in 1976.3 Our active GBS surveillance in Victoria was powered to detect a signal similar to the eightfold increase identified in that study. Our main analysis showed no evidence of a significantly increased risk of GBS following H1N1 immunisation. Three cases of GBS were identified within 42 days following administration of monovalent H1N1 vaccine, with an RI estimate of 3.41 (95% CI, 0.78–14.97).

Passive AEFI surveillance for conditions such as GBS has the potential limitation of poor case ascertainment. In China, a study detected 11 cases of GBS out of 89 million distributed doses of H1N1 vaccine.22 This compares with the National Vaccine Injury Compensation Program in Korea, which had 22 confirmed cases of GBS (Brighton level 1–3).23

A strength of our study was that it reviewed immunisation records from multiple sources, including hospital and general practitioner records, and included a detailed immunisation interview. By comprehensively reviewing admissions, neurophysiology test results and hospital International Classification of Diseases coding, we believe it is unlikely that any cases were missed at participating hospitals. Detailed review identified nine out of 63 cases (14.3%) that were not GBS according to the Brighton criteria. This is less than the 31% misclassification rate described elsewhere.13

A potential study limitation was the low rate of uptake for H1N1 vaccine, as higher population coverage rates increases the power to detect a difference in GBS incidence. Australia did not have an influenza immunisation register, but a representative survey of over 10 000 adults estimated that 18.9% of Australians had received monovalent H1N1 influenza vaccine by December 2009, which was close to our study power calculation of 20% coverage.24 A higher coverage rate (42.6%) was found in individuals aged 65 years and over who are routinely funded to receive the seasonal TIV. A second limitation of the study was the lack of complete immunisation history for six cases, with data only available from hospital records. Including these cases in the SCCS analysis did not significantly alter the relative incidence estimate. The study also had limited data on any infections or laboratory investigations before the GBS diagnosis. The logistics of the study were difficult, with ethics submissions and modifications required at each of the 10 study sites, highlighting the urgent requirement for multisite ethics committees in Australia for both interventional and non-interventional studies.25 This will be important for future AEFI research that needs to be established rapidly and, in these circumstances, ethics review should be expedited.

In this Victorian study, we found that only a small proportion of GBS cases occurred following pandemic influenza immunisation, and that the RI of GBS following immunisation was not statistically different to the baseline rate. The study could not exclude smaller increases in the RI, which have been suggested in studies among larger populations with higher vaccine coverage18 and the preliminary analysis of an international meta-analysis of GBS monitoring studies.26 This highlights the role of international collaborations in active AEFI surveillance, to carefully assess the risks and benefits of population immunisation programs. 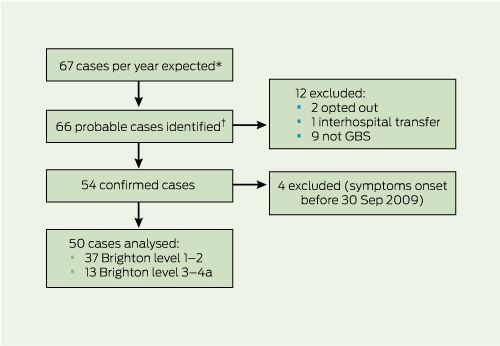 * Based on background rates from the Victorian Admitted Episodes Dataset and the Victorian Emergency Minimum Dataset. † Diagnosed between 30 Sep 2009 and 30 Sep 2010.

We thank Ainsley Swanson, Sherisse Celestino, Natalie Teasdale, Miranda Pellissier and Anne Lickliter for their help in data collection as the research assistants at the GBS active study sites.

This study was funded by CSL Ltd as part of postmarketing surveillance, with financial support for study nurses at each site. The funder did not have any role in data collection, analysis or the decision to publish.