To the Editor: Rates of health care-associated Staphylococcus aureus bacteraemia (HCA-SAB) and hand hygiene (HH) compliance are now subject to public disclosure on the MyHospitals website (http://www.myhospitals.gov.au). HH compliance and HH alcohol hand rub and liquid soap procurement have been associated with reduced methicillin-resistant (but not methicillin-sensitive) S. aureus bacteraemias, generally in the presence of other co-interventions.1,2 However, the National Hand Hygiene Initiative advocates that all HCA-SAB (with both methicillin-resistant and methicillin-sensitive organisms) be interpreted as a key indicator of HH compliance.

We assessed the relationship between HH compliance (from 1 July to 31 October 2011) and HCA-SAB rates (from 1 July 2010 to 30 June 2011) for 21 large Australian metropolitan public hospitals as currently disclosed (extracted from the MyHospitals website on 13 March 2012).

This counterintuitive relationship highlights the erroneous use of HCA-SAB as an indicator of the impact of HH compliance, as there are multiple other important causes of HCA-SAB.3 In the absence of a reliable indicator, HH should instead be evaluated simply by compliance. Even if there was a direct causal relationship between HH and HCA-SAB, contemporaneous (rather than the presently available non-contemporaneous) data should be disclosed, particularly where these data encourage judgements about the performance of hospitals.

While HH is clearly important, it is only one of multiple interventions (including intravascular device management4) required to reduce HCA-SAB.5 This may explain why many hospitals are achieving low HCA-SAB rates despite low HH compliance. It is therefore vital that complex multimodal infection control strategies to prevent HCA-SAB and other infections not be simplistically summarised by HH compliance alone. With the media scrutiny of hospitals with HH compliance below the benchmark, it would be unfortunate if hospitals focused only on HH at the expense of other strategies, simply to achieve the HH benchmark and avert negative publicity. 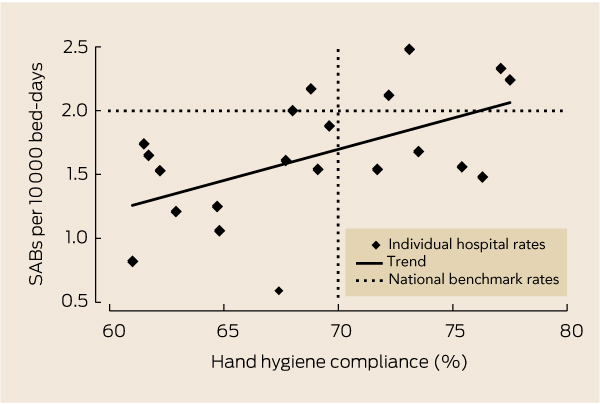