Splenectomy sequelae: an analysis of infectious outcomes among adults in Victoria

Objective: To determine the risk and timing of a broad range of infective outcomes and mortality after splenectomy.

Design, setting and participants: Analysis of a non-identifiable linked hospital discharge administrative dataset for splenectomy cases between July 1998 and December 2006 in Victoria, Australia.

Conclusion: The incidence of severe infection and all-cause mortality differed according to age and underlying reason for splenectomy, and was highest among the elderly and those with malignancy, and was lowest among trauma patients. This highlights the need for targeted prevention programs.

About 300 splenectomies are performed each year in Victoria, Australia, which had a population of about 5 million during the study period.

All patients who underwent a splenectomy in Victoria from 1 July 1998 to 31 December 2006 were identified using linked hospital discharges from the Victorian Admitted Episodes Dataset and death registration data.

The Victorian Admitted Episodes Dataset is maintained by the Victorian Department of Health and is based on hospital data compiled by all public and private hospitals in the state. The dataset contains demographic and clinical information on each episode of patient care, with information coded according to the International statistical classification of diseases and related health problems, 10th revision, Australian modification (ICD-10-AM).5 Death registration data are compiled by the Victorian Registry of Births, Deaths and Marriages.

There are no unique identifiers in these datasets and as such the linked longitudinal dataset of hospital episodes and death registrations has been developed through a process of sequential deterministic linkage. Data released for research are stripped of any potentially identifying data element and in their place is an encrypted unique personal identification number, which serves to bring together data from the same patient over different years of admission. The analysis data are thus personally non-identifiable.

Severe infections were defined using ICD-10-AM codes for infections from the hospitalisation data. The authors categorised the codes into groups according to organ system. Those infections occurring in the first 30 days after splenectomy were excluded in order to avoid inclusion of complications potentially resulting from the primary operation or related admission.

Survival was calculated from the date of splenectomy to either the date of death or to 31 Dec 2006 for those alive at the end of follow-up.

Incidence rates of first severe infection per 100 person-years and 95% confidence intervals were calculated for sex, age group and indication for splenectomy. Multivariate Cox proportional hazards regression models were fitted to compute hazard ratios (HRs), adjusted for age, sex and indication for splenectomy. Hazard proportionality was assessed using analysis of scaled Schoenfeld residuals. Paediatric cases were defined as aged less than 15 years at the time of splenectomy.

Survival curves/time to event curves were calculated for time to death, first severe infection and first episode of sepsis by sex, age group and indication for splenectomy.

All reported P values are two-tailed and, for each analysis, P < 0.05 was considered significant. We used Stata, version 11.0 (StataCorp, College Station, Tex, USA) for all analyses.

The Victorian Department of Health granted ethics approval for this study.

A total of 2574 patients underwent splenectomy in Victoria over the 8-year study period from 1 July 1998 to 31 December 2006. There were 8648 person-years follow-up with a mean follow-up of 3 years, 5 months per person. Splenectomised patient demographics are shown in Box 1. There were 102 paediatric cases (< 15 years of age). These were excluded from subsequent analysis as not being representative of the overall group, leaving 2472 adult splenectomies for analysis. The most common reasons for splenectomy were trauma (25.7%) and therapeutic haematological indications (23.6%).

Vaccination, education and antibiotic prophylaxis are recognised as reducing the risk of postsplenectomy sepsis and death.6 Although the Australasian Society for Infectious Diseases has published guidelines,7 the appropriate duration of antibiotic prophylaxis in otherwise immunocompetent hosts remains ambiguous. Consequently, the questions remain of who should receive antibiotic prophylaxis and for how long? Committing patients to lifelong antibiotics is difficult; therefore, more information on how to tailor therapy can assist decision making. Our study has identified patient groups at highest risk for adverse outcomes and can be used to guide management decisions.

The rates of infection were lowest among patients splenectomised for trauma and highest among those splenectomised for malignant disease, in keeping with other literature.8,9,12,13 Notably, trauma patients may have a partial protective effect from splenosis, owing to self-implanted remnants of the traumatised spleen.18 Partly because of the problems associated with using an administrative dataset, it is difficult to determine whether infection or death was due to the splenectomised state or to the intrinsic risk conferred by the underlying disease process as well as immunosuppressive therapies. This represents an important limitation of our study.

Late in the period of observation (2003) the Victorian Spleen Registry was established. One of its major roles is in providing education to splenectomised patients.19 The median incidence of FSI in the first year after splenectomy was higher than in the 4 years before the Registry began, compared with the 2 years after introduction. However, the short follow-up periods make these data difficult to interpret and unlikely to have a major influence over our findings.

Our study found that encapsulated organisms were less common than gram-negative organisms and S. aureus. It is difficult to determine if this represents uptake of vaccination and antibiotic prophylaxis in Victoria or a changing pattern of postsplenectomy infections. Targeted studies are warranted to determine the microbiology of infecting organisms and whether penicillin remains the most appropriate agent for antibiotic prophylaxis. Prospective studies are needed to analyse infectious outcome data relating to the use of prophylaxis, both with antibiotics and vaccinations. The use of such data to develop a risk assessment tool, similar to the CHADS2 score for anticoagulation in atrial fibrillation,20 and other individualised guidelines for postsplenectomy care would greatly assist clinicians managing asplenic patients. 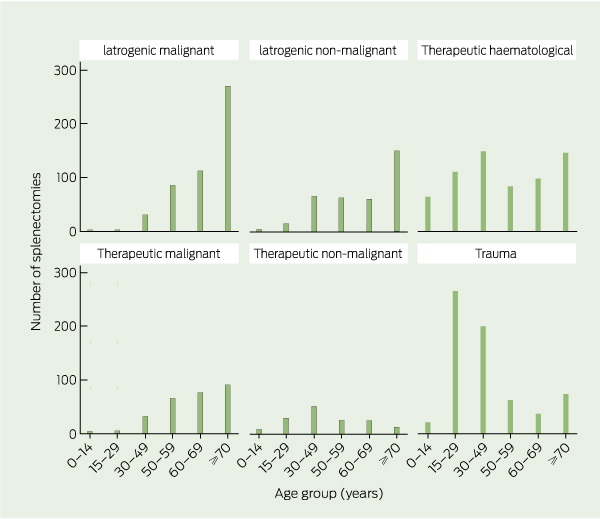 5 Time to first severe infection after splenectomy, by indication (n = 644) 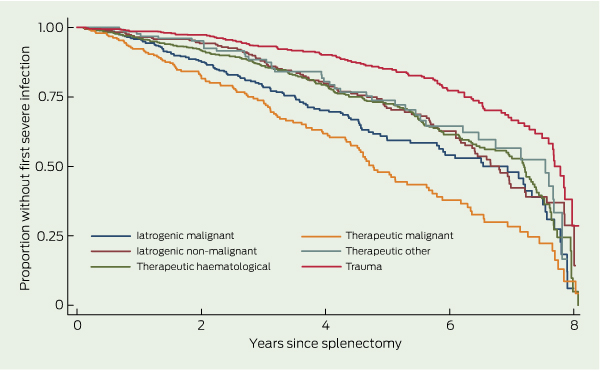 6 Survival after splenectomy, by indication 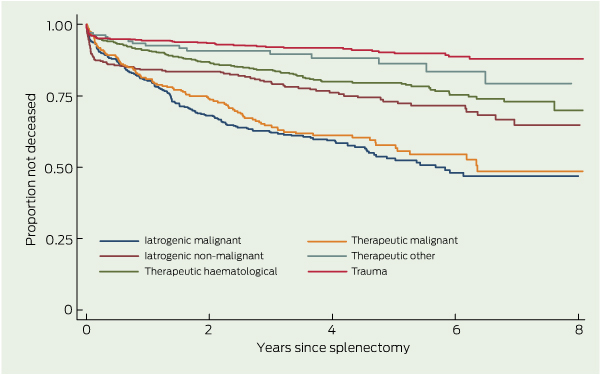 Our work was supported by a grant from the Victorian Trauma Foundation.