A 66-year-old woman was brought to the emergency department at the Alfred Hospital in Melbourne with severe headache and confusion after 2 days of a “flu-like illness”. Her medical history was significant only for rheumatoid arthritis, for which she was prescribed low-dose methotrexate. On initial assessment, she was found to be febrile (38°C) and agitated, and quickly required intubation for decreased consciousness. Full peripheral blood examination showed a total white blood cell count of 35.4 × 109/L (reference range, 4.5–11.5 × 109/L) and acute renal impairment (creatinine concentration, 169 μmol/L, reference range, 45–80 μmol/L). Lumbar puncture performed after intubation showed turbid cerebrospinal fluid (CSF), with 198 × 106/L polymorphs and no lymphocytes seen on microscopy. A Gram stain of her CSF showed gram-positive cocci, which were subsequently confirmed to be Streptococcus pneumoniae. S. pneumoniae was also cultured from blood taken at presentation.

Intravenous therapy with vancomycin, benzylpenicillin, ceftriaxone, and dexamethasone was commenced initially, and the patient was transferred to the intensive care unit for ongoing management, including inotropic support. After antibiotic susceptibility testing, benzylpenicillin therapy alone was continued. The patient became afebrile and haemodynamically stable after 48 hours, but her neurological recovery was prolonged. She remained intubated for 10 days after admission, and required a tracheostomy for respiratory weaning.

Films from blood taken shortly after admission showed target cells, acanthocytes and Howell–Jolly bodies, raising the possibility of anatomical or functional asplenia. Her family and general practitioner were questioned, but they were unaware of previous splenic surgery, or surgical scars or abdominal trauma, and did not believe that the patient had ever received pneumococcal vaccination or prophylactic antibiotics. After extubation, the patient revealed that an absent spleen was noted many years previously when she had a laparoscopic cholecystectomy, but that she was unaware of any implications or required management of asplenia. After the discovery of her (presumed congenital) asplenia, she was referred to the Victorian Spleen Registry for vaccination, commencement of antibiotic prophylaxis, and ongoing education.

During her subsequent hospital stay, it became apparent that the patient had persistent neurological deficits, in particular, unilateral sensorineural hearing loss and difficulty with cognitive tasks and concentration. She spent a total of 19 days in an acute-care hospital and a further 50 days in a rehabilitation centre, and has since returned home with ongoing support from allied health professionals and carers.

Overwhelming postsplenectomy infection (OPSI) is a well recognised long-term risk in patients who have undergone splenectomy. In addition, there are patients who are asplenic for other reasons, including congenital asplenia or medical conditions such as coeliac or sickle cell diseases.1 The incidence of OPSI can be reduced by instituting a suite of preventive measures,2 although auditing has shown that adherence to recommendations is poor, both in Australia and elsewhere.3-5

Partly in response to these studies, a number of national and international guidelines have been published, including recent guidelines produced by the Australasian Society for Infectious Diseases.6 In Victoria and elsewhere, there have been more systematic efforts, including the establishment of registries for people who are asplenic. Our case illustrates the risk of OPSI, and, below, we describe how this risk can be minimised.

Although an individual’s risk for OPSI is only in the order of one in 500 patients per year, this carries a 50% chance of mortality for those affected,6 and a risk of significant morbidity. The cost to the health system of an individual case of OPSI can be significant, and systematic approaches to prevention are cost-effective.7 Guidelines based on the limited evidence available usually recommend a combination of vaccination and long-term antibiotic prophylaxis, plus the supply of emergency antibiotics and, possibly most importantly, patient and family education about health after, and the possible consequences of, splenectomy.1,6,8 In retrospective studies, adherence to these guidelines appeared to reduce the rate of OPSI by about 50%.2

As was the case in our patient, most cases of OPSI are due to S. pneumoniae.6 Vaccination against this organism is important, as is vaccination against Neisseria meningitidis and Haemophilus influenzae type b, and vaccination with the influenza vaccine (Box 1). Prophylactic long-term antibiotic therapy is also recommended (Box 1), on the basis of a similar level of evidence. Lack of antibiotic prophylaxis is associated with increased risk.2,3 If patients cannot tolerate long-term prophylaxis, an emergency supply of antibiotics and information on when to take these may be an appropriate alternative.6,8 Education is also important in recognising signs of infection and the need for early presentation to medical care. Insufficient medical advice to patients and their treating medical practitioners, and forgetting this advice, have been purported to be responsible for cases of OPSI occurring decades after the original splenectomy.3 Education also includes the need for travel advice, especially to areas where malaria exists, and consideration of antibiotic therapy after animal bites or other trauma.

Poor adherence to guidelines has given rise to the suggestion that an active spleen registry may be the best option to ensure adherence to best-practice recommendations.9 There are few previous reports of spleen registries, and those that exist show that registries vary in their methods of operation.10

The Victorian Spleen Registry was established in 2003 with funding from the Victorian Government Department of Human Services for an initial 18-month period. The registry team includes the registry coordinator, infectious disease physicians, clinical haematologists and a clinical immunologist, with additional advice received from surgeons, pharmacists and anatomical pathologists. The registry actively enrols asplenic patients; referral and patient consent are required for inclusion. Patients enrolled on the registry are provided with written information about the management of asplenia, and provided with memory aids such as refrigerator magnets and wallet-sized cards. More than 1000 patients are now enrolled. However, continuing funding for the registry is an ongoing problem.

This case and others, like the one illustrated in Box 2, show the severity of even non-fatal OPSI when it occurs, and the real need to minimise the risk to patients by ensuring that they receive regular vaccination, appropriate antibiotic advice and education, as provided in a registry setting.

1 Summary of current recommendations for adult patients who are asplenic 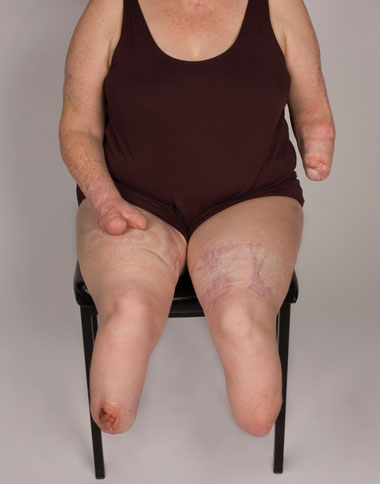 This patient had not had all the necessary vaccinations; she survived, but required amputation of all four limbs.