Objectives: To determine current colorectal cancer (CRC) screening rates and the level of adherence to screening guidelines at a community level.

One in 12 Australians are likely to develop colorectal cancer (CRC) in their lifetime.1 In Australia, CRC is the second most common cause of cancer-related mortality.2 Survival from CRC is stage-dependent, yet fewer than 40% of individuals are diagnosed at a localised stage.3 Several randomised controlled trials have demonstrated that CRC mortality can be reduced by 15%–33% through faecal occult blood testing (FOBT).4-7 A recent randomised controlled trial of once-only flexible sigmoidoscopy for people aged 55–64 years found a 40% reduction in mortality for those offered a screening invitation.8 Although the use of colonoscopy to detect right-sided CRCs is under debate,9,10 indirect evidence suggests a CRC mortality reduction of 60%–76%11 and an incidence reduction of 76%–90%.12

Screening recommendations for people aged 50 years or over vary internationally.13 In Australia, the Clinical practice guidelines for the prevention, early detection and management of colorectal cancer (the national guidelines) recommend that asymptomatic people classified as “at or slightly above average risk” receive FOBT screening biennially, commencing at 50 years of age, with sigmoidoscopy (preferably flexible) considered every 5 years.14 Colonoscopy screening is endorsed only for asymptomatic people who are considered to be at “moderately increased risk” or “potentially high risk” due to risk features including personal or family history of CRC, adenoma and chronic ulcerative colitis. The recently re-funded National Bowel Cancer Screening Program (NBCSP) offers one-off immunochemical FOBT screening to people turning 50, 55 or 65 years of age. Implementation of biennial CRC screening in Australia for all those aged 50–74 years could prevent up to 500 deaths per year,15 with cost-effectiveness comparable to breast and cervical cancer screening programs.15,16

In phase one of the NBCSP in 2006, people aged 55 and 65 years were mailed an FOBT kit, and the participation rate was 43%.17 The second phase, which began in July 2008, also included people turning 50 years of age. In the United States, findings from the National Health Interview Survey18 indicated that 50% of people over 50 years of age had undertaken colonic screening within the recommended time interval (FOBT within 1 year or endoscopy within 10 years). In Australia, previous community and population-based studies have consistently indicated a low uptake of CRC screening, with less than 20% of at-risk individuals ever undergoing FOBT.19-22 More recent population-based data indicated that 36% of people aged over 50 years had ever undertaken CRC testing, with 18% undertaking FOBT in the past 5 years.23

Given the recent announcement of the NBCSP’s continuation and the associated need for future planning and implementation of CRC screening programs, an evaluation of CRC screening practice in the community is timely. This community-based study of at-risk people (aged 56–88 years) aimed to assess for respondents at each level of risk, in accordance with national guidelines: (i) the proportion ever undertaking CRC testing; (ii) the level of uptake for each screening modality (FOBT, sigmoidoscopy and colonoscopy); and (iii) the proportion screened in accordance with screening guidelines.

The Hunter Community Study (HCS) is a longitudinal cohort of community-dwelling men and women, aged 55–85 year at baseline, from the Hunter Region, New South Wales, Australia.24 Participants were randomly selected from the NSW electoral roll between December 2004 and December 2007. The HCS cohort population profile reflects that of the Hunter Region, state and national Australian profiles for sex and marital status, but is slightly younger in age.24 A randomly selected subsample of 1592 HCS participants aged 56–88 years were mailed a questionnaire during November 2009. Reminder telephone calls were made to non-responders 4 weeks after the initial mailout.

Respondents were asked whether they had ever undertaken FOBT, colonoscopy or sigmoidoscopy. Those indicating “yes” to any of these questions were asked to specify the timing of their most recent test and whether this procedure was undertaken as a consequence of a symptom. All respondents were asked about their family history of CRC and the age at which any first- or second-degree relative may have been diagnosed. Respondents’ self-reported family histories of CRC was used to allocate a level of risk to each respondent (Box 1), in accordance with the Australian guidelines.14

Each outcome was assessed overall and according to level of risk. The proportion of respondents screened according to the guidelines was assessed across level of risk as: (i) at or slightly above average risk (FOBT within 2 years; consider sigmoidoscopy, preferably flexible, every 5 years); or (ii) moderately increased or potentially high risk (colonoscopy within 5 years).

Of the 1592 mailed surveys, 1117 respondents completed and returned a survey (response rate, 70%). Twenty-four respondents previously diagnosed with CRC and eight reporting they had undergone major abdominal surgery were excluded from analysis, leaving a total sample of 1085 participants with data. A total of 777 participants were deemed asymptomatic and eligible for CRC screening analysis (Box 2). Sociodemographic characteristics of asymptomatic people are presented in Box 3.

Overall, 63% (475/760) of respondents allocated to a level of risk had ever received any CRC testing (FOBT/sigmoidoscopy or colonoscopy). Within each risk category, 61% of people at or slightly above average risk, 82% of those at moderately increased risk, and 84% of those at potentially high risk had ever undertook CRC testing.

Of the 749 respondents who provided FOBT screening information, 43% had ever received this test, and 20% reported having had FOBT within the previous 2 years (94% of whom were at or slightly above average risk) (Box 4).

Of the 697 respondents at or slightly above average risk and providing screening information on either FOBT or sigmoidoscopy screening, 21% were screened in accordance with the national guidelines (Box 6).

Previous statewide and community-based studies of at-risk people aged over 40 years have indicated a relatively low rate of screening participation using FOBT, commonly reported at less than 20%.19-22 In contrast, our study indicated a substantially higher FOBT participation rate, with 43% of respondents indicating that they had ever undertaken FOBT. This increase is plausible, given the difference in age distribution of respondents examined (aged 56–88 years) compared with previous studies. However, of concern is the low rate of screening in accordance with the national guidelines. In our study, only 21% of respondents at or slightly above average risk, and 45% at moderately increased or potentially high risk were screened in accordance with national guidelines.

Comparison of FOBT screening rates with other national programs is difficult, as recommendations on the frequency of testing vary: annual in the US,25 every 1–2 years in Canada26 and every 2 years in Australia.14 Nonetheless, national and population-based surveys in North America have commonly reported comparable low use of FOBT, often less than 20% within 1 year27,28 and 2 years.29,30 The rate of sigmoidoscopy screening (1% in the previous 5 years) identified in our study is concerning, especially given robust evidence indicating its effectiveness in reducing mortality and incidence.8 However, a potential lack of infrastructure for such screening in Australia may be a contributory factor. In our study, 45% of people at moderately increased or potentially high risk were screened in line with national guidelines. This is an apparent increase compared with a statewide finding that 30% of people at above-average risk had received endoscopy in the previous 5 years.19

The appropriate use of colonoscopy has been assessed in several studies using multidisciplinary expert panels to investigate the appropriateness of procedures. These studies have generally required experts to independently rate indications on the basis of expected health benefits outweighing the negative consequences by a sufficiently wide margin.31 Using such criteria, rates of inappropriate use have been previously estimated at 14%–37%.31-33 Our study found that 16% of asymptomatic people had a colonoscopy in the previous 5 years, most of whom were at or slightly above average risk. Colonoscopy screening for people at this level of risk is not endorsed by the Australian guidelines. However, we acknowledge that information about previous adenoma (where follow-up using colonoscopy is recommended) was not ascertained from study respondents. Consequently, whether colonoscopy was undertaken for this purpose, or for screening, is largely indistinguishable in our study. Nonetheless, a third of most recent colonoscopy screening for people at or slightly above average risk in the previous 5 years was conducted among those who had no other screening procedure, which reduces the likelihood that previous adenoma detection might account for the colonoscopy screening rate.

Currently, over 500 000 colonoscopies are conducted in Australia per year, with this number increasing by 40 000 annually.34 In the absence of symptoms, about 500 colonoscopies would need to be conducted on people aged 50–75 years to identify one cancer.13 Colonoscopy is associated with a serious complication risk of 1 in 1000.35 This contrasts with data that have suggested that one cancer is found for every 20 colonoscopies following positive FOBT in the NBCSP.13 Inappropriate use of colonoscopy may divert resources unnecessarily. Improvements in appropriate testing may reduce the risk of lengthy colon-oscopy waiting times for people testing positive for FOBT.34 Further research should define ways to improve adherence to the guidelines and ensure appropriate referral for colonoscopy.

A limitation to our study was that the CRC screening data obtained was self-reported. Nonetheless, self-reported history of CRC testing and physicians’ reports have been shown to have reasonable agreement, with high levels of sensitivity and specificity.36 Eligibility for participation in the NBCSP (people turning 55 or 65 years of age) was estimated based on respondents’ ages provided at baseline HCS study recruitment, not on their exact dates of birth. For a small minority of respondents at moderately increased or potentially high risk, we may have overestimated the level of risk. Validation of first-degree relations diagnosed with CRC (eg, mother, father, sibling or child) was not ascertained. For respondents indicating that both a first-degree relative and second-degree relative were diagnosed with CRC, we assumed that both relatives were diagnosed on the same side of the family.

In Australia, the NBCSP currently offers FOBT screening only on a one-off basis to people aged 50, 55 or 65 years, with no repeat biennial testing. At present, the NBCSP strategy reaches less than 15% of the at-risk population each year, and there is no commitment to rescreen. Future public health gain from the NBCSP largely rests on the ability to maximise screening rates for appropriate groups through widening the program and providing repeat screening.

1 Level of risk in accordance with national screening guidelines14* 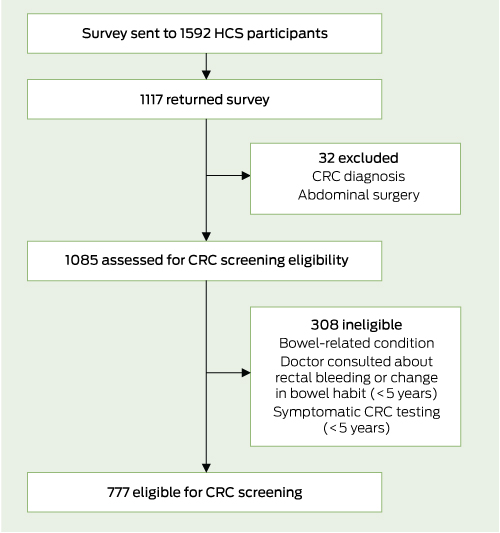 The research on which this article is based was conducted as part of the Hunter Community Study, the University of Newcastle. We thank the University of Newcastle, the Hunter Medical Research Institute and the Lions Club of Adamstown for funding, and the men and women of the Hunter Region who provided the information recorded. We thank Roseanne Peel for her contribution to the development of the studied cohort, Stephen Hancock for designing the current study’s database, and Daniel Barker and Michael Fitzgerald for their statistical support. Ryan Courtney thanks the Australian Rotary Health Research Fund and the Rotary District 9650 Bowelscan Committee for funding his PhD research.