Objective: To determine whether the introduction of an acute surgical unit (ASU) resulted in a greater proportion of patients with acute cholecystitis receiving definitive surgery on index admission with no adverse change in surgical outcomes.

Design, setting and participants: A retrospective study of medical records for patients presenting to Nepean Hospital with acute cholecystitis during the 2 years before and 2 years after introduction of an ASU in November 2006.

Conclusion: Introduction of the ASU at Nepean Hospital resulted in significant improvements in care and outcomes for patients with acute cholecystitis.

An acute surgical unit (ASU) was adopted by Nepean Hospital (a teaching hospital) in November 2006. The ASU is a novel consultant-led model of care for assessing and treating all patients who present with an acute general surgical condition.12 The ASU team consists of a consultant surgeon, two surgical registrars, two resident medical officers and a nurse practitioner working on a 12-hour shift (7 am to 7 pm). The consultant’s sole commitment during a shift is management of patients in the ASU. The team functions in the same way every day of the year, including weekends and public holidays. Overnight, there is a dedicated ASU registrar in the hospital and the consultant is on call. All patients who present with acute general surgical conditions or trauma are admitted into and stay under the care of the ASU. Patients with common conditions are managed according to agreed evidence-based best-practice protocols.

The ASU team was set up at Nepean Hospital to enable more rapid assessment of emergency patients, more timely operative procedures and a more efficient use of operating theatres. Before November 2006, Nepean Hospital had a traditional on-call system (where the patient was admitted under the consultant for the day and managed according to that surgeon’s opinion) and had no consensus on management of patients with acute cholecystitis. The ASU protocol for patients with acute cholecystitis was laparoscopic cholecystectomy on the index admission.

We aimed to determine whether the introduction of the ASU resulted in improvements in care and outcomes for patients with acute cholecystitis.

A retrospective study of medical records for patients presenting to Nepean Hospital with acute cholecystitis was conducted over a 4-year period (1 November 2004 to 30 October 2008) — the 2 years before and 2 years after introduction of the ASU (Box 1). The study was approved by the Sydney West Area Health Service Ethics Committee.

Patients were included if they presented with a history and clinical signs consistent with a diagnosis of acute cholecystitis, confirmed by ultrasound findings of gallstones and associated ultrasound signs of gallbladder inflammation. Patients with biliary tree obstruction (jaundice, cholangitis or biliary pancreatitis) were not included.

Data were analysed using Prism version 5.03 for Windows (GraphPad Software, San Diego, Calif, USA) and the Mann–Whitney U test. A P value of < 0.05 was considered significant.

After the introduction of the ASU, there were significant decreases in the median time to diagnosis (14.9 hours v 10.8 hours), median time to definitive procedure (5.6 days v 2.1 days) and median duration of total admission (4.9 days v 4.0 days). There was also was a significant reduction in the rate of intraoperative conversion from laparoscopic to open surgery (14.9% v 4.5%). No significant changes in the rates of postoperative complications were found.

Introduction of the ASU model of care at Nepean Hospital meant that most patients who presented with acute cholecystitis had surgery on index admission, compared with just over half of those who presented before the model was introduced.

The ASU model also resulted in more rapid diagnosis and earlier surgery (3 days earlier in the admission on average). Although more patients had definitive surgery on index admission, the overall hospital stay was almost a day shorter. These improved efficiencies are due to the model being consultant-led and having a dedicated team available throughout the day to assess and treat patients. Another improvement in patient care was the increase in the proportion of patients who had surgery during daylight hours. Recent studies have highlighted that operating outside of daylight hours is associated with impairments in speed, accuracy and dexterity that contribute to potentially life-threatening errors.13-15

A significant reduction in the conversion rate from laparoscopic to open surgery was also shown. This is likely to result in patients returning to normal activities more rapidly, although we did not assess this. A possible reason for the reduced conversion rate under the ASU model is that surgery is done on patients who have a less severely inflamed gallbladder. This could be due to surgery being performed sooner during the index admission — before the development of severe inflammation that results in conversion. Furthermore, during the pre-ASU period, patients with less severe inflammation that resolved with non-operative treatment were discharged rather than having surgery performed during the index admission.

Introduction of the ASU at Nepean Hospital resulted in significant improvements in patient outcomes and hospital efficiencies relating to acute cholecystitis. Our results support the development of new models of care for surgical patients and offer significant advantages for patients and the health care system. 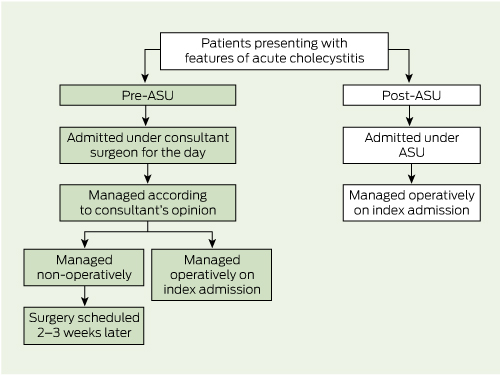 2 Demographics, surgical outcomes and complications for patients who presented to Nepean Hospital with acute cholecystitis before and after introduction of an ASU*