Endovascular therapy after stroke in a patient treated with dabigatran

We report the case of a 76-year-old right-handed independent woman with known atrial fibrillation managed with dabigatran prophylaxis (110 mg twice daily) for several months, who had taken her last dose of dabigatran 30 minutes before the onset of stroke symptoms. She presented to the emergency department 1.5 hours after symptom onset with an acute left hemiplegia, left hemianaesthesia and left homonymous hemianopia corresponding to a National Institutes of Health Stroke Scale (NIHSS) score of 18.

The platelet count was 206 × 109/L (reference interval [RI], 150–400 × 109/L), activated partial thromboplastin time (aPTT) was 33 s (RI, 24–38 s) and international normalised ratio (INR) was 1.3 (RI, 0.9–1.2). The blood glucose level was 6.8 mmol/L (RI, 3.2–5.5 mmol/L). On the basis of the exclusion criterion of current oral anticoagulant therapy, intravenous recombinant tissue plasminogen activator (rtPA) was contraindicated. Therefore, as the patient met the local hospital inclusion criteria for endovascular therapy (ischaemic stroke with contraindication to intravenous tissue plasminogen activator within 3–6 hours, NIHSS score > 4, less than a third MCA territory core infarction apparent on a CT scan of the brain and CT perfusion, and able to provide informed consent) this procedure was commenced at 4 hours and 15 minutes after symptom onset. The patient’s blood pressure before the procedure was 178/95 mmHg, and thus was lowered with propofol to 140/65 mmHg.

A clot retrieval device (Solitaire AB Neurovascular Remodeling Device, 4 × 15 mm; ev3 Inc, Irvine, Calif, USA) was used to achieve reperfusion to the right MCA beyond the M2 segment (Box 3). The procedure was performed under general anaesthesia. Initial diagnostic imaging was performed using a 5-French diagnostic catheter and heparin (3000 IU) was delivered intravenously. A 6-French shuttle sheath (Cook Medical, Brisbane, Qld) was positioned within the common carotid artery, and then a 6-French neuron guide catheter was positioned within the inferior right internal carotid artery. A Transcend floppy guidewire (0.014"; Boston Scientific, Natick, Mass, USA) and Rebar 18 microcatheter (ev3 Inc, Irvine, Calif, USA) were advanced into the right MCA and two occluded branches selected. The microguidewire was passed through the thrombus and the microcatheter was advanced over the wire about 5 mm beyond the thrombus. The position of the microcatheter was confirmed by contrast injection. The stent was then advanced to the distal tip of the microcatheter and then unsheathed, both within and just beyond the thrombus. The distal microcatheter marker was positioned proximal to the uncovered stent. The unsheathed Solitaire AB stent and microcatheter were removed as a unit while suction was applied to the guiding catheter. This procedure was repeated with each pass. Angiographic assessment was performed after each pass with the Solitaire AB stent to assess for revascularisation status, vessel trauma or distal emboli. Two passes as described using the Solitaire AB stent were performed within each of the two affected vessels achieving TIMI (Thrombolysis In Myocardial Infarction) grade 2 flow or better.

Contrast extravasation was seen arising from the posterior branch of the right MCA on a subsequent contrast digital subtraction angiogram (DSA). However, this was not seen on the final contrast cerebral DSA. Vessel morphology remained normal on final imaging. Despite the extravasation seen, no clinical deterioration was observed. Right groin haemostasis was achieved using a 6-French Angio-Seal artery closure device. The duration of the procedure was 2 hours, and recanalisation was achieved at 5.5 hours after symptom onset. Conservative management was chosen after consultation with the neurosurgical team, and the patient was monitored in the intensive care unit after the procedure.

The NIHSS scores immediately after the procedure and at 24 hours were 17 and 8, respectively. A routine CT scan of the brain at 24 hours showed hyperdensity in the subarachnoid space (which had largely resolved on further CT imaging by Day 11) as well as infarction, predominantly within the posterior insular cortex (Box 4).

Over the following week, the patient showed clinical improvement with resolution of hemiparesis and only residual left hemisensory and visual inattention at the time of discharge to rehabilitation.

Owing to the clinical improvement and the clearing of the CT hyperdensity, it was felt that repeat angiography of the cerebral vessels would be unjustified. After the Day 11 CT scan, secondary stroke prevention therapy with warfarin (which replaced dabigatran) was started with the patient’s consent. At 3-month follow-up, the patient’s modified Rankin Scale score was 1, and she had returned to independent living at home.

Intravenous administration of rtPA is now considered standard therapy in acute stroke, and is being widely used around the world and in Australia.1 However, the concomitant use of anticoagulants, including dabigatran, contraindicates use of rtPA because of a theoretical risk of intracerebral haemorrhage. Despite this, two recent case reports have shown benefit of using rtPA in patients taking dabigatran who have had a stroke, although its safety requires confirmation in a larger cohort.2,3 Endovascular approaches using mechanical clot extraction devices do not expose patients to thrombolytic agents, and thus their use may have fewer haemorrhagic sequelae in stroke patients taking dabigatran.4

To the best of our knowledge, this is the first case report of endovascular therapy for acute ischaemic stroke in a patient taking dabigatran. This situation is likely to occur more frequently in the near future as direct thrombin inhibitors including dabigatran become available as alternatives to warfarin for stroke prevention in patients with atrial fibrillation.5 It should be emphasised that, unlike warfarin, the INR and aPTT are not very useful indicators of the anticoagulant effect of dabigatran, and pathology laboratories are currently establishing appropriate monitoring strategies for this new group of anticoagulants.6

Although perforation of a vessel is a rare but feared complication of mechanical thrombectomy, it is likely that this patient experienced an asymptomatic intimal tear with only transient extravasation in the context of repeated passes of the clot extraction device.

The Solitaire device used in our patient was originally designed for cerebral aneurysm bridging. However, a recent retrospective review of patients treated endovascularly with the Solitaire AB stent suggests that this procedure appears to be safe and able to deliver favourable clinical outcomes in patients with proximal cerebral vessel occlusion,7 albeit without anticoagulation therapy. Currently, no guideline exists on the safety of treatments for acute stroke in patients taking dabigatran. Although there is anecdotal evidence of success with intravenous rtPA therapy in this setting, endovascular therapy holds promise because the risk of bleeding is theoretically lower. This is important because there is no practical immediate reversal of dabigatran currently available. There is preliminary evidence of the safety of endovascular therapy in acute stroke;7 however, data on its safety in patients taking anticoagulants are lacking. Such data would enable the development of a consensus guideline for this increasingly prevalent clinical problem. 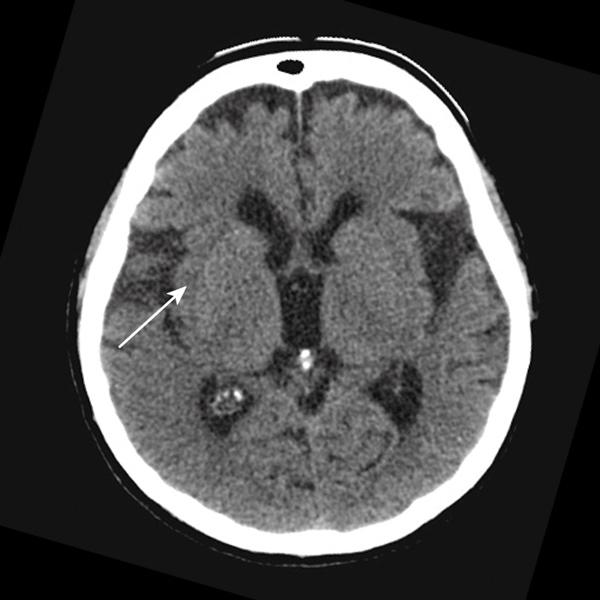 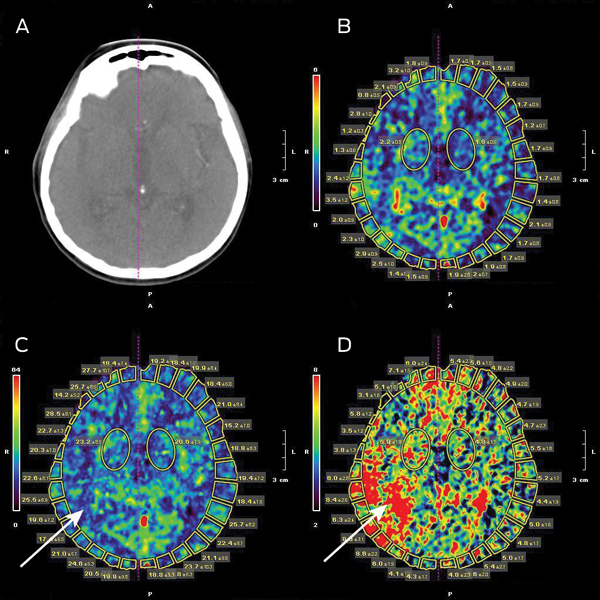 The scans show: (A) a plain CT scan; (B) a symmetrical cerebral blood volume map; (C) slight flow reduction in the right temporoparietal junction on the cerebral blood flow map; and (D) a corresponding area of abnormality on the mean transit time map.

3 Angiographic imaging before and after the endovascular procedure 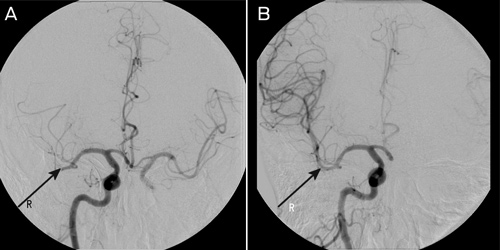 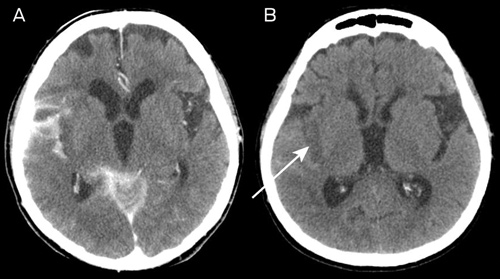