David was born in Adelaide on 14 September 1933  into a family with strong medical connections. He was educated at St Peter’s College and graduated with distinction in agriculture from Roseworthy Agricultural College in 1954. He then studied medicine at the University of Adelaide, graduating in 1960. In 1961, David joined the Australian National Antarctic Research Expedition at Mawson Base, where he undertook substantial research, for which he received an Australian Antarctic Medal. He returned to Australia in 1963, to begin specialist training in radiation oncology at the Royal Adelaide Hospital (RAH). He completed his training in Melbourne at the Peter MacCallum Cancer Centre and received his MD on brain radiation sensitivity from the University of Melbourne in 1974.

In 1979, David was appointed Radiation Oncologist at Flinders Medical Centre, and, in 1980, he became Director of Radiation Oncology at the RAH. David worked tirelessly to upgrade his centre to modern staffing and equipment levels. Full accreditation followed, providing a progressive, stable public hospital infrastructure for radiation oncology in South Australia. Through his careful documentation of Australia-wide radiation workforce, workload and equipment shortfalls between 1986 and 1999, he also contributed nationally to improved patient treatment access and cancer outcomes. From 1994 until he retired in 2010, David was Director of Clinical Radiobiology at the RAH.

He enjoyed teaching and will be remembered for his generously shared, in-depth insights into the biological basis of cancer care for individual patients. On 8 December 2010, David died from complications relating to a cerebral haemorrhage following successful cardiac valve surgery. David is survived by his wife Christine and children Alison, Ian and Alan. 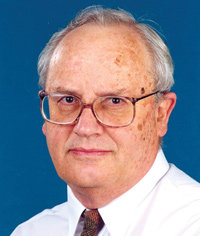