Twenty-six years of enteric fever in Australia: an epidemiological analysis of antibiotic resistance

Participants and setting: All S. Typhi and S. Paratyphi isolates from patients diagnosed with enteric fever in Australia between 1985 and 2010.

Main outcome measures: Incidence and variation in antibiotic resistance over time and according to country of origin.

Conclusions: Nalidixic acid resistance has become widespread in enteric fever isolates from the Indian subcontinent and some parts of South-East Asia, justifying the use of ceftriaxone or azithromycin rather than ciprofloxacin as first-line treatment. However, resistance in some countries remains rare, potentially allowing treatment to be adjusted according to country of origin.

Enteric fever is caused by Salmonella enterica subspecies enterica serovar Typhi (S. Typhi) and serovars Paratyphi A and B (S. Paratyphi A and B). Enteric fever is estimated to affect 27 million people annually worldwide, and has an estimated annual mortality of around 216 000.1 It causes epidemics in Central America, Asia, Africa and the Middle East.2 Over the past 20 years, the development of antibiotic resistance has compromised the therapy of this infection.

Chloramphenicol, ampicillin and trimethoprim–sulfamethoxazole had previously been the mainstays of treatment of enteric fever, but resistance to these agents (multidrug resistance) emerged in the late 1980s in the Indian subcontinent.3 Quinolone agents, such as ciprofloxacin, initially retained activity against multidrug-resistant (MDR) isolates, but reports of quinolone treatment failure soon appeared, and decreased susceptibility to quinolones is now widespread in the Indian subcontinent and in many Asian countries.2

In Australia, enteric fever is an “exotic” disease, and selection of an agent for treatment of this infection must take into account likely patterns of antibiotic resistance in the country of acquisition. The Australian Therapeutic guidelines: antibiotic now recommend that first-line treatment for patients with enteric fever acquired in the Indian subcontinent or South-East Asia should be with azithromycin or ceftriaxone.4

S. Typhi and S. Paratyphi isolates from patients in all Australian states and territories are sent to the University of Melbourne Microbiological Diagnostic Unit Public Health Laboratory for phage typing and antibiotic susceptibility testing. The entire dataset has not been analysed or reported previously, and published information about antibiotic resistance in Australian S. Typhi and S. Paratyphi isolates is limited.5 We aimed to investigate the epidemiology and variations in antibiotic resistance of these isolates over the past 26 years to further inform antibiotic choice.

We investigated consecutive isolates of S. Typhi and S. Paratyphi collected in Australia between January 1985 and December 2010. Isolates from patients in all Australian states and territories were collected and processed centrally at the University of Melbourne Microbiological Diagnostic Unit Public Health Laboratory.

Duplicate isolates from the same patient were removed. In addition to submission of isolates, referring laboratories provide data on age, sex, isolation date, isolation site and reported country of origin.

Susceptibility to antibiotics was determined when isolates were first received using standard methods previously described.6 Susceptibility testing was performed by agar dilution and determined using Clinical and Laboratory Standards Institute breakpoint concentrations for resistance7 (Box 1). The breakpoint for low-level ciprofloxacin resistance reflects reports of reduced efficacy in some isolates above 0.06 mg/L.8 Susceptibility testing for ciprofloxacin resistance was commenced in January 1994 and for cefotaxime in December 2000.

MDR S. Typhi and S. Paratyphi isolates are defined by resistance to ampicillin, trimethoprim and chloramphenicol.9 By convention, nalidixic acid resistance is used as a surrogate for fluoroquinolone resistance; some patients infected with nalidixic-acid resistant (NAR) isolates have been reported to have poor clinical response rates to ciprofloxacin despite the isolates testing as susceptible to ciprofloxacin using breakpoints for Enterobacteriaceae.8

The outcome variables of interest were numbers of S. Typhi, S. Paratyphi A and S. Paratyphi B isolates (first clinical isolate only) and antibiotic resistance patterns. Predictor variables included age, sex, and year and country of travel. Methods used were exact tests for binary and categorical predictors and binary outcome variables (such as resistance rate by region). Logistic regression analysis was used for continuous predictor variables with binary outcome variables (such as age and resistance rates). Denominator data for population incidence were obtained from the Australian Bureau of Statistics.10 Data were analysed using Stata 10 (StataCorp, College Station, Tex, USA).

Data about the country or region of origin were available for 1917 isolates (75%). There were 74 countries or regions represented, with the most common sources of acquisition being India (33% of isolates) and Indonesia (22% of isolates) (Box 2).

Before 1991, minimal drug resistance was identified in any enteric fever isolate from Australia (Box 4 and Box 5).

MDR S. Typhi isolates were first detected in Australia from 1989 to 1990 and the rate increased rapidly to 13.7% by 1991–1992. Thereafter, the 2-year incidence has remained relatively stable, varying between 7.1% and 14.6% (Box 4). Multidrug resistance has been restricted almost exclusively to S. Typhi isolates; there have been only six MDR S. Paratyphi isolates, and none since 2001.

Resistance to other agents remains uncommon. Since testing began 11 years ago, only one isolate (S. Typhi, originating from India in 2009) of 1253 isolates tested has been resistant to third-generation cephalosporins.

Patterns of resistance according to country of origin
Multidrug resistance

The highest rates of nalidixic acid resistance were observed in isolates from the Indian subcontinent. The overall rate since 1993 was 36.9%, but rates varied according to country and Salmonella serovar; for example, resistance was 78.8% among 560 isolates from India (S. Paratyphi, 82.8%; S. Typhi, 76.6%), and 33.7% in isolates from Pakistan (Box 6 and Box 7).

While the incidence of enteric fever manifest in Australia remains low, the frequency of travel to and from regions of high endemicity has led to an increase over recent decades. Our study provides a comprehensive assessment of the incidence of enteric fever over the past 26 years and describes the rapid evolution of multidrug and nalidixic acid resistance — perhaps a portent of what might occur with ceftriaxone and azithromycin.

Between 1985 and 2010, we observed an increase in the incidence of S. Typhi and S. Paratyphi; from four to five before 2003 to seven cases per million person-years after 2003. This is comparable to increases in the United States,11 United Kingdom,12 and Canada.13 The median age and demographics likely reflect the population travelling to and from countries where enteric fever is endemic.

The Indian subcontinent has seen a rapid increase in nalidixic acid resistance, first (in the early 1990s) in S. Paratyphi A and later (since 2000) in S. Typhi. For both serovars, resistance was first recognised in India and was subsequently reported in the rest of the subcontinent over the following 5 years. The emergence of nalidixic acid resistance across the Indian subcontinent in returned travellers from this study reflects rates found within country-specific studies from India,14 Bangladesh15 and Nepal.16 Resistance is thought to have developed rapidly due to excessive and unregulated antibiotic use in these developing countries.

Our finding of very low rates of antibiotic resistance in Indonesia for both S. Typhi and S. Paratyphi differs from an Indonesian study, which showed rates of multidrug resistance of up to 6.83% and ciprofloxacin resistance of 3.90% from South Sulawesi.18 This discrepancy is likely explained by a predominance of isolates in our study arising from Bali, the most popular Australian tourist destination in Indonesia.

Therapeutic options for treatment of MDR and NAR enteric fever are limited to ceftriaxone and azithromycin, so emergence of resistance to either of these agents would be a major concern. Only one isolate in this study tested resistant to ceftriaxone, which supports the observation that resistance to third-generation cephalosporins is yet to become established.13 Our reference laboratory does not routinely perform azithromycin resistance testing at present because minimum inhibitory concentration (MIC) cut-offs have not been determined. However, there have already been reports of enteric fever isolates with high azithromycin MICs associated with clinical failure,22 so this situation will require careful monitoring. Gatifloxacin, an extended-spectrum fluoroquinolone with good clinical activity against S. Typhi and S. Paratyphi, including NAR isolates, has unfortunately been withdrawn from the market in many countries due to reports of an association with hypoglycaemia and hyperglycaemia.23

Our study did not record whether travellers were visiting friends or relatives (VFRs). Previous studies have demonstrated an increased risk of enteric fever in such populations,24,25 partly due to reduced uptake of pre-travel medical advice, including vaccination. It would be useful to be able to ascertain the proportion of VFRs to other tourists who contract enteric fever to determine individual risk and better inform the need for specific population-directed education.

Our study details the emergence of multidrug and nalidixic acid resistance in returned travellers from Australia and others who have acquired enteric fever overseas over the past 26 years. While the rate of multidrug resistance has plateaued, the rate of nalidixic acid resistance has continued to increase in both S. Typhi and S. Paratyphi isolates. The current Australian Therapeutic guidelines: antibiotic recommend the use of ceftriaxone or azithromycin,4 either of which is effective treatment for patients with confirmed or presumptive enteric fever, including drug-resistant infection; however, those who acquire enteric fever in places such as Bali, Indonesia, could be confidently treated with ciprofloxacin due to the low rates of resistance. To ensure emerging resistance is detected and to inform treatment, it is vital that the current comprehensive testing of antibiotic resistance in enteric fever isolates continues. 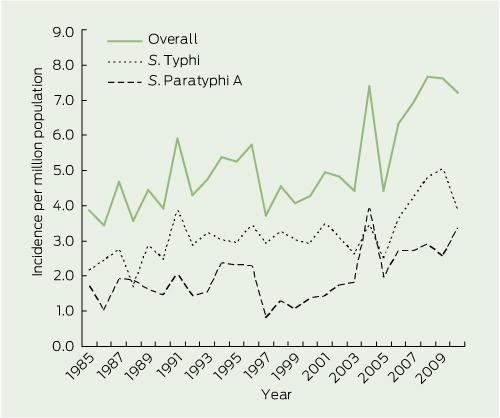 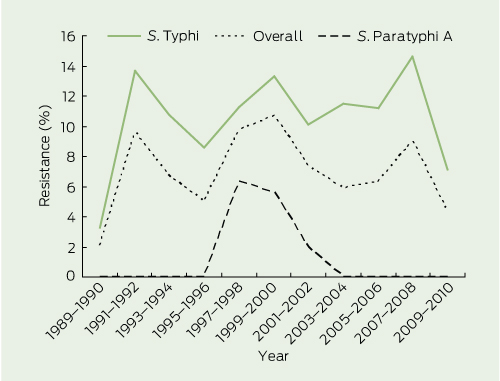 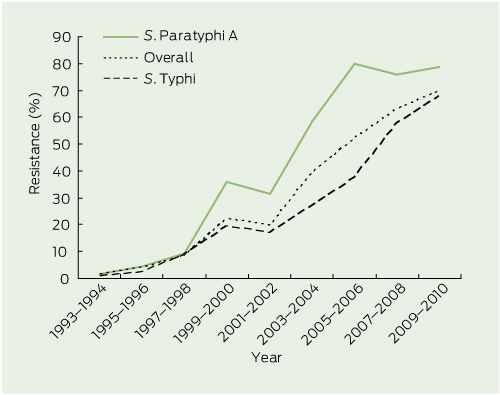 6 Rates of nalidixic acid and multidrug resistance in S. Typhi and S. Paratyphi A isolates 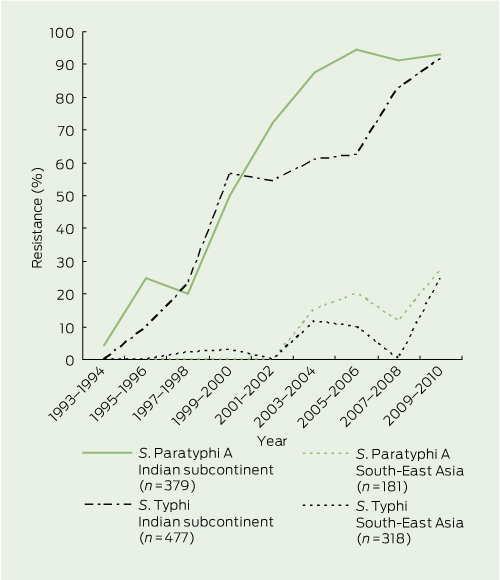 We acknowledge the Australian laboratories that provided isolates for this study and the Victorian Government Department of Health for funding the Microbiological Diagnostic Unit Public Health Laboratory.