Objective: To examine the differential in cancer survival between Indigenous and non-Indigenous people in Queensland in relation to time after diagnosis, remoteness and area-socioeconomic disadvantage.

Design, setting and participants: Descriptive study of population-based data on all 150 059 Queensland residents of known Indigenous status aged 15 years and over who were diagnosed with a primary invasive cancer during 1997–2006.

Conclusions: After a wide disparity in cancer survival in the first 2 years after diagnosis, Indigenous patients with cancer who survive these 2 years have a similar outlook to non-Indigenous patients. Access to services and socioeconomic factors are unlikely to be the main causes of the early lower Indigenous survival, as patterns were similar across remoteness and area-socioeconomic disadvantage. There is an urgent need to identify the factors leading to poor outcomes early after diagnosis among Indigenous people with cancer.

Aboriginal and/or Torres Strait Islander people (referred to here as Indigenous Australians) have poorer rates of cancer survival than non-Indigenous people.1 Because ascertainment of Indigenous status in routinely collected data sources is incomplete, analysis of population-based cancer registry data has been largely restricted to registries known to have high-quality data ascertainment, such as those in Queensland, Northern Territory, South Australia and Western Australia.2 The limited data that are available show a consistent picture of similar overall cancer incidence, but lower incidences of some cancers that have a better prognosis (such as melanoma) and higher incidences of cancers with poorer prognoses.3

Data were provided by the population-based Queensland Cancer Registry (QCR),13 under an agreement between Cancer Council Queensland and Queensland Health allowing access to non-identifiable data. For these analyses, all people of known Indigenous status aged 15 years and over who were diagnosed with a primary invasive cancer (International classification of diseases for oncology, 3rd edition [ICD-O-3] codes, C00–C80) during 1 January 1997 to 31 December 2006 were included. We excluded people whose age or residential location at diagnosis was unknown, or whose diagnosis was based on the death certificate or autopsy report only. Cases included in the study were followed to 31 December 2007, with matching to the National Death Index. Those still alive at 31 December 2007 were censored at that date, while those who died from a cause other than the diagnosed cancer were censored at their date of death.

Since the differential in the incidence of cancer between Indigenous and non-Indigenous depends on cancer type, with cancers common among Indigenous people more likely to be associated with low survival rates,14 we constructed a variable representing broad cancer groups based on 5-year cancer survival estimates for all of Queensland13 to include in the analysis. These estimates were: < 25% (eg, cancers of the oesophagus, liver, lung, pancreas and unknown site); 25%–49% (eg, stomach and ovarian cancers, myeloid leukaemia, myeloma); 50%–74% (eg, colorectal and kidney cancers, non-Hodgkin lymphoma) and 75%–100% (eg, breast, cervical and prostate cancers and melanoma).

Residential location at diagnosis was obtained from the QCR, according to Statistical Local Area (SLA). These SLAs were then grouped according to the level of geographic remoteness based on the Accessibility/Remoteness Index of Australia (ARIA+). Area-level socioeconomic disadvantage was measured by quintiles of the Index of Relative Socioeconomic Advantage and Disadvantage (IRSAD), because this index is determined without including Indigenous status.15

Information on sex, age at diagnosis and Indigenous status was obtained from the QCR. Age at diagnosis was categorised into five age groups (15–49, 50–59, 60–69, 70–79 and 80 + years). The QCR obtains information about Indigenous status of cancer patients through the process of cancer notification from Queensland hospitals. Ascertainment of Indigenous status is based on an individual identifying him- or herself as either Aboriginal only, Aboriginal and Torres Strait Islander or Torres Strait Islander only. As the focus of our analysis was on the survival differential between Indigenous and non-Indigenous people, we also excluded those patients whose ethnicity was unknown.

Variables considered for inclusion in the model were geographic remoteness, area-socioeconomic disadvantage, age group, sex, Indigenous status, and broad cancer group. Cancer stage could not be included because the QCR does not routinely collect these data at diagnosis. Interactions between covariates, including time-varying coefficients, were also considered.

A systematic process was used to develop the final model, considering the proportional hazards assumption, overall model fit and the influence exerted by individual cases. Scaled Schoenfeld residuals, which test for non-zero slope over time, were used to check if the proportional hazards assumptions were satisfied. Model goodness of fit was assessed by Cox–Snell residuals. Deviance residuals were then used to examine model accuracy. We considered the influence of individual cases to determine their impact on each of the estimated individual coefficients (using the DFBETA statistic) as well as their effect on the combined set of coefficients (using the LMAX statistic).16,17

Conditional survival, which reflects the average probability of an individual surviving a certain number of years given they have already survived for x years,18 was calculated for both Indigenous and non-Indigenous cohorts.

There was clear evidence of lower cancer survival for Indigenous compared with non-Indigenous people (Box 2 2A). The survival curves in Box 2 2A show the cumulative survival from diagnosis.

The initial model included all variables in the model (age group, sex, rurality, area-socioeconomic disadvantage, broad category of cancer site and Indigenous status). However, proportional hazards assumptions were clearly not met for each broad cancer group (based on scaled Schoenfeld residuals, each P < 0.001), so the model was adjusted to include cancer site as a stratification variable.

Proportional hazards assumptions were not being met for the final age category (P < 0.001) or sex (P < 0.001). While including the interaction terms Indigenous–sex and Indigenous–age group improved the model fit based on the likelihood-ratio tests, the proportional hazards assumptions were still violated (overall model, P < 0.001). To address this, we further included age and sex in the model as stratification variables.

The final model included rurality (ARIA+), area-socioeconomic disadvantage (IRSAD), Indigenous status and time-varying Indigenous components, and was stratified by broad cancer site category, sex and age group. The graph of Cox–Snell residuals (not shown) indicated excellent model fit, and there was no evidence the parameter estimates were being overly influenced by outlying individual datapoints.

Survival estimates and results from the final Cox hazard model are shown in Box 3. Indigenous people experienced poorer survival during the first and second years after diagnosis after stratifying by age, sex and broad cancer site category, and adjusting for area-level disadvantage and remoteness. This disparity decreased with time since diagnosis, and after 2 years there was no survival disparity between Indigenous and non-Indigenous patients with cancer.

Survival was lower for people living in less accessible areas and those in more disadvantaged areas. However, there was no significant evidence for interaction found between Indigenous status and either remoteness (P = 0.780) or area disadvantage (P = 0.845).

In this population-based study of cancer in Queensland, we found significant disparities between the survival outcomes for Indigenous and non-Indigenous people after their diagnosis. These differences remained after accounting for remoteness, area-socioeconomic disadvantage, age group, sex and mix of cancers. However, this survival disparity was modified by time since diagnosis, with the comparative risk of death decreasing as the time from diagnosis increased. This varying time effect has not been previously noted in studies examining cancer survival among Indigenous people in Australia,4,19 apart from a brief mention of time-varying comparative Indigenous and non-Indigenous survival in patients with colorectal cancer in the Northern Territory.20

This is important information for Indigenous patients with cancer to know, because the longer they survive the greater chance they have of continuing to survive. Most of the currently published literature has focused on the poorer survival outcomes of Australian Indigenous people diagnosed with cancer. This is justifiable, and has helped galvanise a concerted government, clinical and research effort to reduce this disparity in cancer survival. However, the perspective that Indigenous cancer patients have a continued poorer prognosis cannot help but limit their own personal optimism and outlook for the future. Thus, our results, based on the total Queensland population, provide an avenue for increased optimism among Indigenous cancer patients that they can successfully complete their cancer journey.

However, this optimism must be constrained by a strong call to action to understand what is causing the very wide disparity in survival within the first 1 to 2 years after diagnosis. A recent Queensland study showed a survival differential for Indigenous patients with breast cancer that remained even after adjusting for spread of disease.21 This suggests that other factors, such as the impact of poorer general health and increased comorbid conditions among the Indigenous compared with the non-Indigenous population, also play an important role. There may be a healthy cohort effect, as Indigenous patients who survive beyond 2 years after diagnosis may have fewer comorbid conditions or better general health than those who died earlier. Alternatively, Indigenous patients with cancer in Queensland (all cancers) are less likely to undergo treatment for their cancer than other patients.8 Indigenous patients who use health services and receive adequate treatment may have better rates of survival.22 Until Australian cancer registries standardise the collection and recording of stage and treatment data, it will be impossible to explore these factors appropriately.

We found no evidence that the differential in Indigenous versus non-Indigenous survival varied according to geographical area of residence. As the use of any area-based measure of socioeconomic status is likely to over-estimate the affluence of Indigenous people,23 this reinforces the lack of evidence. This may indicate the Indigenous survival differential is not primarily related to access to treatment or socioeconomic barriers, but that other as yet unknown factors are more relevant, including those related to culture and general health, and that these other factors have similar impact across geographical locations. Clearly, having an almost 50% differential in cancer survival within the first 12 months of diagnosis is not acceptable, and our findings should increase the motivation for further efforts in this area. Greater emphasis and research focus should therefore be placed on identifying the factors responsible for the early disparity in survival.

Limitations of our study include the relatively small numbers of Indigenous cases, which gave us limited capacity to investigate differences for specific types of cancer. We were also unable to separate the effects of early diagnosis from other factors, including those of treatment differentials. As it is possible that not all cases of cancer in Indigenous people were identified, there is potential misclassification of true Indigenous status. However, this misclassification is thought to be small,8 and ascertainment is considered high.2

In conclusion, our findings provide some cause for cautious optimism, as Indigenous patients in Queensland who have already survived 2 years after a cancer diagnosis are likely to have a similar outlook to that of non-Indigenous patients. However, there is still an urgent need to address the unacceptable disparity in survival outcomes early after diagnosis. This important health issue must remain a continuing priority.

2 Comparison of survival between Indigenous and non-Indigenous people aged ≥ 15 years diagnosed with invasive cancers in Queensland, 1997–2006 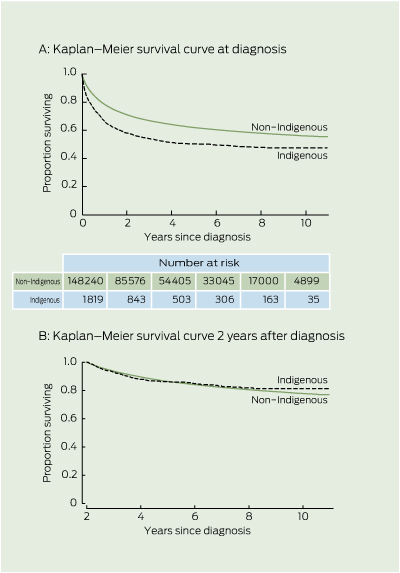 4 Conditional 5-year survival estimates* by number of years after diagnosis for all invasive cancers diagnosed in patients aged 15 years and over in Queensland, 1997–2006