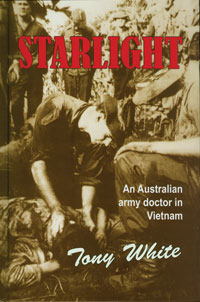 RETIRED COLONEL Tony White of the Royal Australian Army Medical Corps served in South Vietnam in 1967, and this narrative is largely based on his detailed correspondence with his family at the time. The title, Starlight, refers to the radio call sign for army doctors and medics.

Following a move, midway in his medical studies, from the University of Cambridge in the United Kingdom to the University of Sydney in Australia, White accepted an undergraduate scholarship from the Australian Army to complete his studies. After finishing his hospital residency, he was posted as Regimental Medical Officer (RMO) to the newly formed 5th Battalion, Royal Australian Regiment (5RAR).

Flying into Saigon’s Tan Son Nhut Airport brought the young 25-year-old RMO to the so-called “Sufferer’s Paradise”. The Vietnam War, in essence a civil war, became the longest and most controversial of Australia’s military conflicts to date.

Twelve of the book’s 17 chapters are devoted to White’s wartime experiences with the 5RAR at the Australian base at Nui Dat in Phuoc Tuy Province. The battalion took many casualties during its deployment. February 1967 was the battalion’s critical period, when two tragic episodes beset the unit — White describes them with sensitivity and compassion, but also with a sense of despair. The final segments of the book are devoted to White’s subsequent civilian medical career in dermatology in Sydney.

This compact, hardcover book is well illustrated, with several photographs and a map. It contains a handy list of abbreviations and terminologies, as well as a comprehensive index. The text is also supported by appropriate end notes.

This moving work is a welcome addition to the few publications of military medical officers’ accounts of their experiences in the Vietnam War. It is recommended to those who partook of that war, to the wider non-military readership who remember the era, as well as to today’s younger generation.