Clement J Walter was a talented, innovative and understated ophthalmologist.

He was born in Pambula, New South Wales, on 29 August 1915 and grew up near Bega. He lost his parents and sister when young and was brought up by family friends.

Clem was dux of Bega High School and graduated in optometry from Sydney Technical College with a special medal in 1939.

Having no close family support, Clem’s sole income was derived from hard work and lecturing in optometry.

He began his medical studies at the University of Sydney in 1941, graduating in 1947 with a distinguished undergraduate record. During this time, he married Sue in 1942 and, in 1946, their daughter Michele was born.

After residency at Sydney Hospital, Clem undertook ophthalmic training at Sydney Eye Hospital and gained his Diploma in Ophthalmology in 1951. He then became a Staff Ophthalmologist at Royal Newcastle Hospital, where he worked until 1974. Clem provided the best possible expertise to patients irrespective of their income and he excelled in his public and private work.

In 1972, Clem received Fellowship of the Royal Australian and New Zealand College of Ophthalmologists.

Clem was always interested in medical retinal work and, when he moved to Sydney in 1975, he developed a large city laser and medical retina practice consisting solely of tertiary referrals. He imported the first Nd:YAG laser to Australia when there were only three such lasers functioning in the world.

Ill health forced Clem to retire officially in the late 1980s. However, Fred and Ian Wechsler persuaded him to assist in their comprehensive ophthalmic practice in Burwood for many years. They admired his intellect, ingenuity and talent. He set the gold standard for a medical ophthalmic consultation and refraction. He designed his own indirect ophthalmoscope. He bred a camellia (which bears his name), and carried out all his own boat and car repairs. His humility was like a breath of fresh air in an era of advertising and aggressive self-promotion.

After a stroke, he retired in 2001 and joined his daughter Michele, her husband Malcolm and their two boys in Berwick, Victoria. We all mourn the passing on 27 June 2011 of a truly remarkable pioneer who contributed so much to ophthalmology. 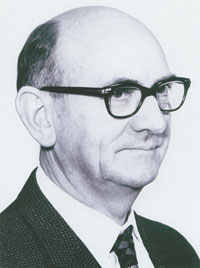