Anthony Leong was born in Singapore in 1945 and graduated from the University of Malaya in 1969. He pursued postgraduate training in America, where he completed his pathology residency at the University of Washington, Seattle, between 1971 and 1973. In 1976, he migrated to Adelaide to continue his work in lymphoma and tissue processing, especially tissue staining and immunohistochemistry. He excelled in research and, in 1980, received a doctorate in medicine from the University of Adelaide, where he was Clinical Professor of Pathology from 1981 until 1996.

From 1996, he dedicated most of his effort and time to the Asia–Pacific region, where he held a number of leading posts including Professor of Anatomical and Cellular Pathology at the Chinese University of Hong Kong and Honorary Professor of Pathology at the Post Graduate Medical Institute, Beijing. From 1999, Anthony was Professor of Anatomical Pathology at the University of Newcastle and Medical Director of the Hunter Area Pathology Service. He was a Fellow of the colleges of pathologists of Australasia, the United Kingdom and America, as well as an honorary Fellow of the Hong Kong and Thai colleges. He served as President of the International Academy of Pathology, Australasian Division in 1995–1996 and was the foundation President of the Asia–Pacific Society for Molecular Immunohistology in 2005–2006. He was also a founding member of the Society of Applied Immunohistochemistry and the International Society for Analytical and Molecular Morphology.

Anthony’s most influential footprint was in the field of immunohistochemistry, where he left a great legacy of excellence in research and an unsurpassed love of pathology. He was a prolific author of over 370 original papers, reviews and book chapters, and more than 23 textbooks and monographs. He was a great teacher, a wise mentor and a wonderful leader, who was full of humour and interesting anecdotes. His favourite pastime was golf, and he was a proud member of the “four amigos” golf team at his local club. However, it is fair to say that his golfing never matched the dizzying heights of his academic record!

Anthony passed away in late June 2011 after a short battle with cancer. He is survived by his wife Wendy and two children Trishe and Joel, both pathologists. 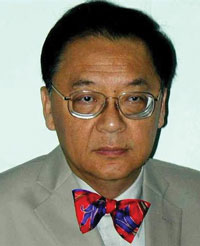