In developed countries, people who inject drugs (PWID) are the group at highest risk of infection with hepatitis C virus (HCV).1 Throughout the 1990s, regulations restricting access to antiviral treatment for HCV by PWID existed in many Western countries, although they were not evidence based.2

In the early 2000s, in Australia and elsewhere, guidelines changed to allow treatment of people who are current injecting drug users3 — however, hepatitis C virus (HCV) notifications among PWID in Australia remain high, and few currently receive HCV treatment. Australia’s annual Needle and Syringe Program Survey indicates that, between 2005 and 2009, only 4.7%–9.1% of respondents who knew they had HCV reported treatment for HCV (with interferon alone or interferon plus ribavirin [including pegylated interferon]) and less than 2% were being treated when interviewed.4 Furthermore, although prescribing of drugs to treat HCV has increased,5 few people who currently inject drugs in Australia receive treatment outside research projects.6

HCV treatment reduces an individual’s risk of developing chronic liver disease, cirrhosis and hepatocellular carcinoma and improves quality of life.7 Treating HCV in people who currently inject drugs also has a broader public health benefit. One study indicated HCV treatment among PWID could reduce HCV infection prevalence in the general community in Australia;8 and recent modelling by Martin and colleagues9 suggested that only a small proportion of people who currently inject drugs need to be treated to significantly reduce HCV infection prevalence among PWID over 20 years.9

We adapted Martin et al’s model9,10 to estimate the impact of HCV treatment on prevalence among PWID living in Victoria, Australia.

A previously developed model of HCV transmission among PWID9,10 (fully described in the Appendix) was parameterised using data from Victoria, Australia. It consists of differential equations that track change among PWID who are susceptible (never infected, or previously infected and underwent spontaneous or treatment-induced clearance); who have chronic HCV infection; who are currently receiving treatment; and who do not achieve a sustained viral response (SVR) after treatment (and cannot be retreated). Previous modelling indicated that the presence of immunity has a negligible effect on treatment impact,9,10 hence this model assumes no immunity. People who begin to inject drugs enter the susceptible pool and leave (by dying or ceasing to inject) at fixed rates. Susceptible PWID become infected at a rate proportional to infection risk and the prevalence of HCV among PWID. PWID enter treatment at a fixed rate (Φ PWID with chronic HCV infection per 1000 PWID annually) unless the number infected is driven below Φ, whereupon all PWID with chronic HCV infection are treated. The model does not explicitly model individual genotypes, but we weighted the average SVR rate and treatment duration to the genotype distribution in Victoria.

We assumed treatment with pegylated interferon alfa and ribavirin leads to a 45% SVR rate for genotype 1 and 80% for genotype 2 or 3.11 A systematic review estimated that 26% of people with acute HCV infection spontaneously clear the disease.12

The baseline model included the Victorian estimates: population of PWID, 25 000 (based on the number of PWID enrolled in opioid substitution treatment in Victoria, and self-reported opioid substitution treatment uptake data from epidemiological studies);13,14 average duration of injecting, 14 years;6 prevalence of chronic HCV infection among PWID (as determined by a positive polymerase chain reaction test result), 50%;4,15 genotype 2 or 3, 44%, and genotype 1, 56%;15,16 mortality rate, 0.0083% per year;17 and annual HCV treatment rate, 1/1000 PWID.4 The Appendix contains a table of parameters.

As estimates for baseline chronic infection prevalence among PWID in Victoria are uncertain, we explored the impact of lower (45%) and higher (55%) prevalences. Additionally, because of uncertainty in the average length of injecting and SVR rates among PWID, we examined scenarios with longer (16 years) and shorter (12 years) injecting durations (Appendix).

As a substantial increase in treatment rates would require a gradual scale-up, we also explored a scenario where treatment increased linearly from baseline to the full treatment rate over 5 years. In this model, we explored the potential impact of new, direct-acting antiviral therapies with improved efficacy and shorter treatment duration. We modelled scenarios with an 80% SVR rate and a 24-week treatment duration for all genotypes after year 5.

Finally, we examined a scenario where uptake increased because of new treatments with higher SVR rates and shorter duration. We compared treating 5/1000 PWID annually with baseline SVR rates to the following scenario: 5/1000 treated for 5 years with baseline SVR and treatment duration rates, followed by 20/1000 treated for the remaining years with an 80% SVR rate and 24 weeks of treatment.

Introducing a 5-year scale-up period before reaching full treatment rates reduced the impact of treatment by 10%–14% at 15 years (Box 4, A), but the differences were minimal at 30 years (Box 4, B). If new treatments increased SVR to 80% and decreased treatment duration to 24 weeks for both genotypes after 5 years, the estimated impact would increase by 20%–26% at 15 years, and 17%–38% by 30 years, depending on the scale-up strategy.

A benefit was predicted from new treatments resulting in higher SVR with shorter treatment durations when uptake was increased from 5/1000 to 20/1000 after 5 years (Box 5); the projected HCV infection prevalence was nearly half the baseline prevalence by 30 years. Maintaining the treatment rate at 5/1000 showed minimal impact (prevalence of 47% at 5 years and 46% at 30 years).

Our modelling suggests that modest rates of HCV treatment among people who currently inject drugs could halve HCV infection prevalence among PWID in 30 years in Victoria. Although this is particularly relevant to Victoria, as the Victorian Government has recently funded ten HCV treatment nurses to work in community-based clinics in urban and regional Victoria, similar impacts on HCV infection prevalence are possible elsewhere in Australia. Our findings suggest that structuring clinics and nurses’ roles to improve timely access to HCV treatment and to support adherence and treatment completion for PWID could produce considerable population-level reductions in HCV transmission. Moreover, new HCV treatment therapies are likely to become available soon, including regimens that are not based on pegylated interferon.18,19 Treatment outcomes (SVR rates) will improve for all patients, irrespective of viral genotype and their previous response to therapy. Treatment length will decrease, as will drug side effects,20,21 further increasing the projected impact of treatment on HCV infection prevalence.20

In the past, concerns about treating PWID have included lack of compliance with therapy, associated drug resistance, and the potential for reinfection.22 These concerns may discourage clinicians from recommending HCV treatment and deter health service bureaucrats from funding clinics that are appropriately located and structured to meet the complex health needs of PWID. A recent Australian study of HCV treatment uptake and deferral, using data from the Australian Chronic Hepatitis C Observational Study, identified factors related to drug and alcohol use rather than clinical factors as the major influences on treatment uptake.23 A recent systematic review of HCV treatment for PWID found adequate levels of adherence in this population and low levels of reinfection after successful treatment;24 and a subsequent study of treatment of acute and early chronic hepatitis reported high levels of adherence regardless of reported injecting behaviour.25 Internationally, several studies in a range of settings have demonstated that successful treatment of current injectors is possible;6,26 one study reports high treatment adherence, irrespective of injecting drug use before or during therapy.6,25 Additionally, the rate of reinfection after treatment has been shown to be low.27

Knowledge about HCV diagnosis and management in the primary care setting in Australia is poor,28 and considerable work is needed to ensure primary care clinics can appropriately manage HCV infection in PWID. However, Australian primary health care practitioners have considerable experience in managing complex chronic diseases affecting patients with multiple and complex health needs — for example, diabetes, HIV and problems with mental health.29 With appropriate training and adequate resourcing it should be feasible for them to manage HCV infection in PWID, particularly if systems are developed to facilitate shared-care and timely referral of complex patients to HCV specialists.30

The model’s prediction that treating people who currently inject drugs will reduce prevalence and HCV transmission despite risk of reinfection suggests that it is worthwhile funding the treatment of HCV infection in PWID, even if managing this group is resource-intensive.31 Such a policy would involve locating HCV nurses in primary care services attended by a high proportion of PWID and ensuring that other support services are available, including mental health, drug and alcohol, social welfare, housing and peer support.

Our study has limitations. While estimates for the model parameters were generated from multiple data sources, injecting drug use is a highly stigmatised and typically hidden behaviour, so the number of PWID in Victoria and mean duration of injecting are uncertain. Our findings are based on a predictive model rather than experimental evidence or observations in other communities, and assumes that, after scale-up, treatment rates will be constant for 30 years (for example, 625 PWID treated annually); however, as HCV infection prevalence decreases, so may demand for HCV treatment. Conversely, increasing awareness and improvement of treatment may lead to increased treatment uptake. We assumed that the rate of initiation to injecting remains constant over time. The population of PWID may increase due to general population growth or decrease due to changing drug-use patterns, although numbers in Victoria have been stable over the past 15 years.32

Finally, the model assumes that risky injecting behaviours and HCV infection prevalence are homogenously distributed among PWID and that all infected PWID have equal probability of HCV acquisition, treatment access, and treatment success. Assuming population heterogeneity in HCV risk and treatment accessibility may lead to the model overestimating the impact of treating 625 PWID annually.

PWID are at greatest risk of acquiring and transmitting HCV infection, but very few are being treated. Because of the high risk of onward transmission, even modest increases in treatment rates in this group may lead to considerable population-level reductions in HCV infection prevalence. Particularly when considered in combination with the value of treatment to individuals, this finding suggests there are real benefits in investing additional resources in treating PWID. 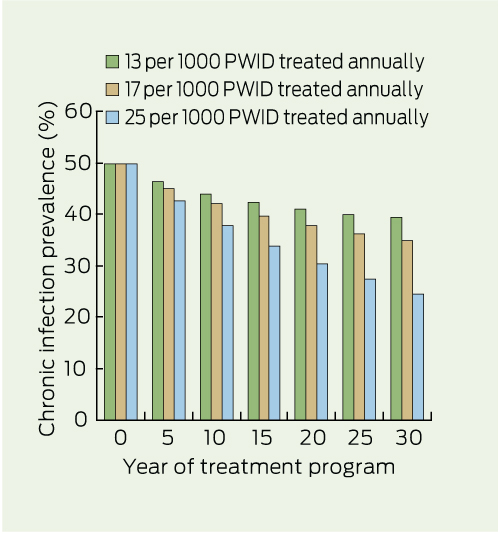 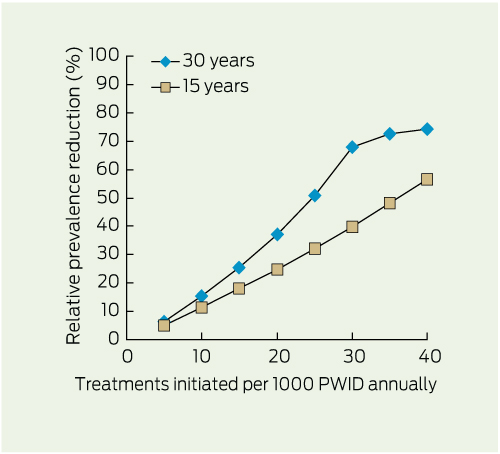 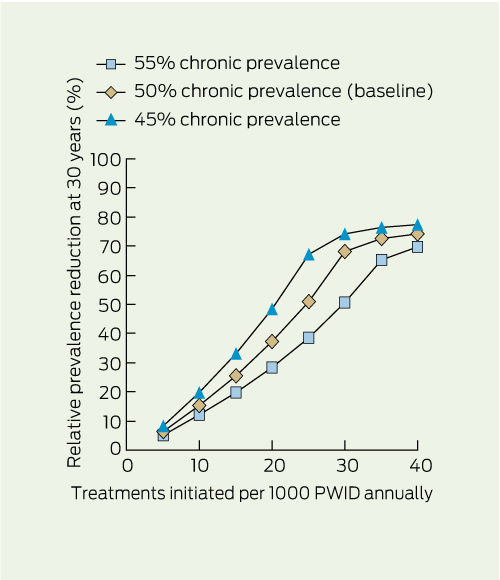 4 Estimated impact of a 5-year HCV treatment program scale-up and new antiviral treatment on relative prevalence reduction among PWIDs, at 15 and 30 years* 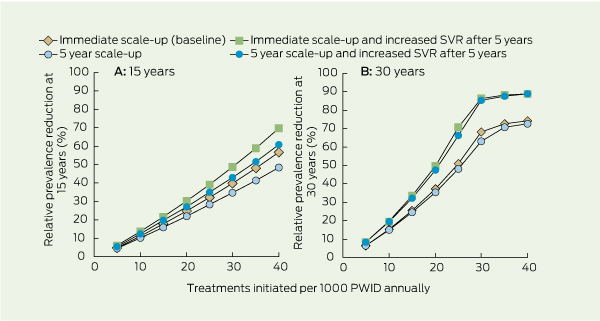 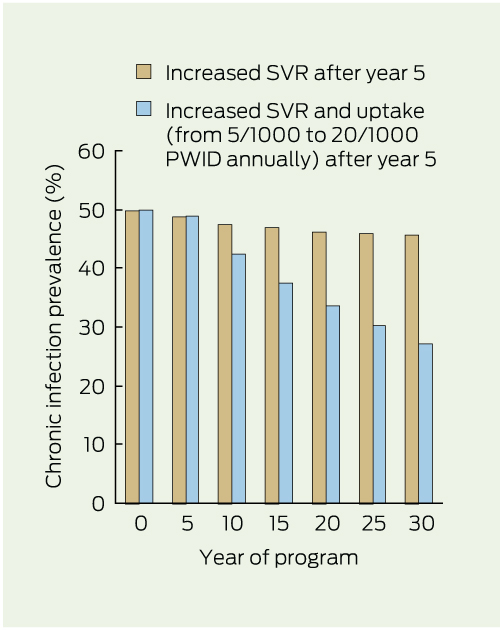