Objectives: To describe the epidemiology and toxicity of caffeinated energy drink exposures in Australia.

Design, setting and subjects: Retrospective observational study analysing data from calls regarding energy drink exposures recorded in the database of an Australian poisons information centre over 7 years to 2010.

Results: Callers reported 297 exposures to energy drinks, which showed an increasing annual trend from 12 in 2004 to 65 in 2010. Median age for the 217 subjects with recreational exposure was 17 years (interquartile ratio [IQR], 15–21; range, 11–60) and 57% were male. One hundred recreational users co-ingested other substances, predominantly alcohol (50) or other caffeinated products (44). The number of energy drinks consumed in one session varied greatly (median, 5 units; IQR, 3–8; range, 1–80). Most subjects who reported recreational use reported experiencing symptoms (87%). The most common symptoms were palpitations, agitation, tremor and gastrointestinal upset. Twenty-one subjects had signs of serious cardiac or neurological toxicity, including hallucinations, seizures, arrhythmias or cardiac ischaemia. At least 128 subjects (57 with no co-ingestants) required hospitalisation.

The new millennium has ushered in a wave of synthetic, caffeinated high-energy drinks targeted at the youth market. Over the past 10 years, the consumption of caffeinated beverages intended to “energise” has increased significantly. Energy drinks were recently shown to comprise 20% of the total convenience store beverage market, with “Red Bull” and “V” accounting for over 97% of sales in this multimillion-dollar industry.1 Increasingly, toxicity from caffeine overdose is being reported to hospitals and poisons centres.

The main active constituents of energy drinks include varying amounts of caffeine, guarana extract, taurine and ginseng. Additional amino acids, vitamins and carbohydrates usually complete the list of purportedly beneficial ingredients.2 The intended effects of energy drinks are to provide sustenance and improve performance, concentration and endurance. Manufacturers pitch their product to athletes, students and people in professions that require sustained alertness. These drinks are also commonly consumed at dance parties, which require sustained energy for prolonged activity into late hours. In this setting, they may also be combined with alcohol and recreational drugs such as ecstasy (MDMA; 3,4-methylenedioxymethamphetamine) or other amphetamines. Young adults and adolescents are particularly attracted to energy drinks because of effective product marketing, peer influence and a lack of knowledge of the potential harmful effects.3-5 The high sugar content in caffeinated energy drinks is similar to other soft drinks and is known to contribute to obesity.6

Adverse reactions and toxicity from high-energy drinks stem primarily from their caffeine content.7 The sympathomimetic effects of high-dose caffeine mostly explain the symptoms and hospital presentations related to energy drinks. There is little published literature on the extent and epidemiology of this problem. Indeed, a recent literature review on the effects of energy drinks in children and adolescents found only eight case reports on medical complications from energy drinks.8 Our study was undertaken to obtain an understanding of the scope of consumption-related issues and toxicity from caffeinated energy drinks in Australia by analysing data from calls to the NSW Poisons Information Centre (NSWPIC) — the largest centre of its type in Australia, taking about 110 000 calls per year, which is 50% of all poisoning-related calls in the country.

We undertook a retrospective review at the NSWPIC. Data included calls providing advice to the general public and health professionals. Calls from New South Wales, Tasmania and the Australian Capital Territory are exclusively handled by NSWPIC from 6 am to midnight; an after-hours call-sharing system is in place with interstate poisons centres. Ethics approval was obtained from the human research ethics committee of the Children’s Hospital at Westmead.

We searched the NSWPIC Microsoft Access database for calls relating to caffeinated energy drink ingestions in the 7-year period from January 2004 to December 2010. Our search strategy included “guarana”, “caffeine”, “ethanol”, “food additives”, “energy drink”, “alcohol: other/unknown”, and “non-drug product: other/unknown”. Due to the large number of “other/unknown” exposures, a filter was applied to find results with the name of any known Australian marketed energy drink or “caffeine” or “energy” in the free-text product name field. “Recreational” ingestion was defined as intentional ingestion for the purpose of gaining euphoria or other psychotropic effect. “Accidental paediatric” ingestion was defined as non-deliberate ingestion by a person under 18 years of age.

Finally, all the cases found from this search were subjected to manual review for inclusion and subsequent coding and verification of the reported type of exposure, co-ingestants, symptoms, dose, brand of drink, and the subject’s age, sex and hospitalisation status. Symptoms and coding were reviewed separately by the authors. Discrepancies were discussed until agreement was achieved.

Over the 7-year period that we examined, data for 297 calls related to caffeinated energy drink exposures were recorded. Call numbers increased from 12 in 2004 to 65 in 2010 (Box 1). The most common exposure type was recreational (217); other exposures were classified as accidental paediatric (62), deliberate self-poisoning as part of a polypharmacy overdose (16), allergic reaction (1) and paediatric lactational exposure (1). The brands of energy drinks to which subjects were most commonly exposed and their active ingredients are listed in Box 2. Sixty per cent of calls were received between 5 pm and 3 am.

Typically, recreational users were adolescents or young adults. Median age was 17 years (IQR, 15–21; range, 11–60), and 57% were male. The number of drinks consumed in one session varied greatly (median, 5 units; IQR, 3–8 units; range, 1–80 units). Co-ingestion of other substances was recorded for 46% of recreational users (Box 3). The most popular co-ingested substances were alcohol and other caffeine-containing products.

Commonly reported symptoms and their frequency are listed in Box 4. Symptoms were occasionally reported even at manufacturer-recommended amounts of energy drink consumption and were frequently reported with recreational use (87%; 188/217). The most commonly reported symptoms were related to gastrointestinal upset and sympathetic overdrive, as can be predicted for caffeine toxicity. Twenty-one callers reported signs of serious toxicity such as hallucinations, seizures, and cardiac ischaemia. At least 128 people required emergency department (ED) attendance, 57 of whom had not co-ingested another substance. Of those attending an ED, 79 had self-presented and 49 had been referred by the NSWPIC for further management based on the clinical significance of their symptoms.

Our study demonstrates the extent of the growing problem in Australia with energy drink consumption and toxicity, particularly among adolescents. Serious adverse effects and toxicity are seen with energy drinks containing variable amounts of caffeine. The phenomenon of mixing energy drinks with alcohol, stimulants and other co-ingestants is clearly occurring and is a serious concern.

In 2009, the energy drink industry spent nearly $15 million on marketing alone in Australia. Value growth in the convenience sector had increased by 20% as compared with 10% for carbonated beverages on the whole.9 The target population for these types of drinks clearly includes adolescents and young adults, as well as professionals.10 Consumers are likely to be unaware of the variation in chemical composition and caffeine dosage in energy drinks, and with little or no warnings on products, the potential for overdose and poisoning remains ever-present.

A typical can of energy drink may contain up to 300 mg of caffeine, from added caffeine and natural sources such as guarana.11 Guarana, an extract from the plant Paullinia cupana, contains caffeine, theobromine and theophylline in varying quantities. Some studies have suggested that the caffeine content of guarana (40–80 mg per gram of extract) is not always declared in packaging and is additional to the listed caffeine content of energy drinks.8 Hence, the caffeine dose may be higher than that listed on the beverage ingredients list. However, Australian Food Standards Code 2.6.4 requires labelling of the total amount of caffeine from all sources, pure and naturally occurring.12 Guarana is currently thought to have no adverse effects other than potential caffeine toxicity.13 Similarly, taurine, an amino acid found in many energy drinks, is purportedly inotropic, and considered to be non-toxic at typical doses. Ginseng, a herbal extract famous for its purported stimulant and aphrodisiac properties, is present in energy drinks below common daily doses, and has not been reported to be toxic. Ginseng, however, has multiple and important drug interactions that may become clinically relevant depending on the amount of ginseng ingested and the dose and frequency of the drugs that might interact with it.14

Even as little as 50 mg of caffeine can induce tachycardia and agitation. In overdose, caffeine toxicity can mimic amphetamine poisoning and lead to seizures, psychosis, cardiac arrhythmias and, potentially but rarely, death.15-20 In 2009, a caffeine-related death from energy drinks was reported.21 Electrocardiograms showed that the patient had acute myocardial ischaemia that was probably brought on by caffeine-induced coronary vasospasm. It has been postulated that the pathophysiology of such coronary events involves increased platelet aggregation and reduced endothelial functionality.22

In our study, calls regarding toxicity from energy drinks fell into a bimodal distribution: accidental ingestion in young children, and recreational use in adolescents. It is concerning that the trend of misuse and toxicity appears to be increasing among teenagers and that the number of energy drink units ingested far exceeds recommended maximum levels. Some manufacturers suggest 200 mg/day of caffeine as a maximum, which equates to roughly one and a quarter 500 mL cans of energy drink. The variety of symptoms reported in our study was consistent with caffeine overdose and, potentially, stimulant misuse. Nearly 60% of calls reporting recreational use came from EDs, suggesting that hospitalisation is warranted in a significant proportion of cases. Although it occurred in a minority of subjects, serious toxicity leading to cardiac complications (coronary ischaemia, arrhythmias) and neurological complications (hallucinations, psychosis, seizures) is of grave concern both to the community and clinicians.

Studies among American college students called attention to the mixing of energy drinks with alcohol.3,23 Young people, particularly adolescents, appear to be least concerned with this dangerous phenomenon.4,24 This was evident in our results, in that almost one-quarter of calls reporting recreational consumption involved co-ingestion of alcohol. Nearly 30% of calls involved co-ingestion of caffeine tablets or other stimulants such as amphetamines. This suggests that knowledge of energy drink effects and toxicity is poor, and mixing of substances is not seen as a problem in this cohort of adolescents and young adults.

Data on caffeine-related toxicity have been reported from poison centres in the United Kingdom and United States.17,25 We are not aware of other studies specifically reporting poison control centre data on toxicity from energy drinks. However, misuse by adolescents of caffeine in non-prescription medication as well as in energy drinks has been commonly reported to regional poison centres in the US.26 Even more alarming is the practice of combining caffeine misuse with other pharmaceuticals, which has been associated with admission to hospital.27 A 1999 Australian survey of NSW school children aged 8–18 years found that energy drink consumption was more prevalent in boys and increased with age in girls.28

Limitations of our retrospective analysis include the non-standardised methods of telephone enquiry and coding that are likely to have resulted in underreporting of exposures, co-ingestants and symptoms. We did not analyse outcomes for subjects who were hospitalised. As the NSWPIC takes roughly 50% of all poisons-related calls in Australia, our results may only partially reflect national trends. With increased call-load sharing between the NSWPIC and other Australian poisons centres, the number of after-hours calls to the NSWPIC has decreased by roughly 20% since 2009. This is also reflected in the drop in the number of calls related to caffeinated energy drinks by a similar percentage in 2010.

Given the clear evidence of toxicity and the growing number of hospitalisations associated with consumption of energy drinks, particularly in a vulnerable adolescent population, health authorities should increase awareness of the problem, improve package labelling and regulate caffeine content. We recommend that labelling and any marketing of these products should include appropriate health warnings and the national poisons hotline number (13 11 26 in Australia). Energy drinks are marketed for similar effects and should carry similar warning labels as non-prescription, over-the-counter caffeine tablets. The regulation of caffeinated energy drinks is currently under consideration by the Australia and New Zealand Food Regulation Ministerial Council.29 This review and regulation is timely and essential. 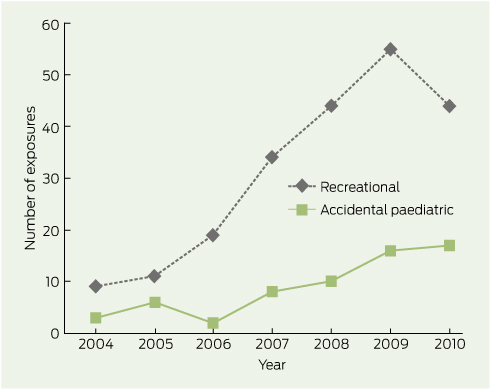 3 Recreational use of other substances with energy drinks (n = 217)

4 Frequency of the most commonly reported symptoms, by type of exposure and co-ingestant use (n = 202) 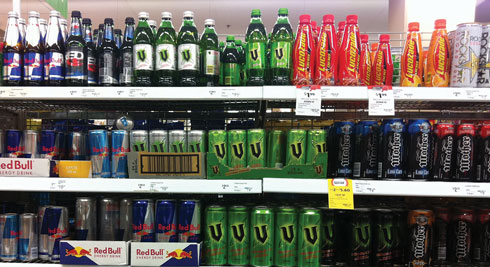