Impact of the 2010 tobacco tax increase in Australia on short-term smoking cessation: a continuous tracking survey

Objective: To use population-level data to monitor the impact on smoking cessation activity of the April 2010 Australian tobacco tax increase.

Design and setting: The Cancer Institute NSW [New South Wales] Tobacco Tracking Survey (CITTS) is a continuous tracking telephone survey conducting about 50 interviews per week. Data from February to September in 2009 and 2010 were analysed (ie, data on people who quit smoking in the 3 months before and 5 months after the tax increase in 2010 were compared, and quitting activity over the same period in 2009 was also analysed).

Results: 22% of the sample reported that they had quit smoking in May 2010, compared with 13% in April 2010 and 12% in May 2009. Respondents interviewed in the 3 months after the tax increase (May–July) were significantly more likely to report quitting than those interviewed in the 3 months before the tax increase (odds ratio, 1.84; 95% CI, 1.26–2.69; P < 0.01). This increase in quitting activity was not sustained in the subsequent months (August–September).

Conclusions: The tobacco tax increase was associated with a short-term increase in the rate of smoking cessation among NSW adult smokers and recent quitters, suggesting that regular increases in tobacco tax may further encourage quitting activity.

Tobacco tax increases have been identified as the most effective single intervention to reduce demand for tobacco,1 with higher taxes associated with greater reductions in cigarette sales.2,3 In the 2009 report of the Australian National Preventative Health Taskforce, the first recommendation for reducing tobacco consumption was to make tobacco products significantly more expensive. At the time, Australia was lagging behind international comparators, with a pack of 30 cigarettes costing $13.50 in Sydney, compared with $16 in Toronto (Canada) and $20 in Dublin (Ireland).4 On 30 April 2010, the Federal Government announced a 25% increase in tobacco tax, effective immediately, raising the price of an average pack of 30 cigarettes by around $2.20. This was the first real-terms tobacco tax increase in Australia in a decade.

Most of the research on the link between tobacco tax increases and changes in cigarette consumption has used sales data5 and smoking prevalence data.6-8 Collecting population-based smoking cessation data at the time of a tobacco tax increase is difficult, because taxation policies are usually implemented rapidly. As a result, only a few studies have examined the impact of rising cigarette prices on individual-level measures of smoking cessation. One study compared the proportion of smokers reporting a quit attempt in the months before, and the month immediately after, a 95 cents per pack cigarette price increase in California;7 there was a significant increase in cessation activity in the month after the increase.

The 2010 Australian tobacco tax increase occurred while the Tobacco Tracking Survey of the Cancer Institute NSW [New South Wales] was in progress. We therefore had a unique opportunity to track individual-level data to assess actual quitting behaviour in the months before and after the tax increase. Data collected in 2009 allowed a comparison of quitting patterns in the two consecutive years.

The Cancer Institute’s Tobacco Tracking Survey (CITTS) is a continuous survey of NSW adults, both smokers and those who have quit smoking during the previous 12 months (recent quitters). The CITTS monitors smoking-related cognition and behaviour, as well as responses to changes in tobacco-control legislation and programs; 50 interviews per week are conducted by professional telephone interviewers across most weeks of the year. Households are recruited to the telephone survey using random digit dialling of landline telephone numbers, and participants are recruited by a random selection procedure.

For our study, analyses were limited to smokers and recent quitters interviewed between February and September in 2010 and in the same months in 2009.

The method used for determining recent quitting activity is described in Box 1.

Demographic characteristics — age, sex, household income, and level of education — were obtained from the survey. Postcodes were used with the Socio-Economic Indexes for Areas9 to indicate socioeconomic status (SES) (dichotomised into low SES = quintiles 4–5; and moderate–high SES = quintiles 1–3).

For smokers, a heaviness of smoking index (HSI) was constructed using a short form of the Fagerström tolerance questionnaire,10 with slight modification. The HSI is calculated as a combination of time to first cigarette after waking and number of cigarettes smoked per day, and was divided into three categories (low, moderate, high).

Since the HSI was not available for recent quitters who were included in this analysis, the analysis was also run using smokers only and including the HSI to verify that differences in quitting activity across the months were not due to differences in heaviness of smoking. This analysis showed the same pattern of results, and so the model including recent quitters (without the HSI) is reported. We also tested all interactions between months of quitting activity and demographic variables to determine whether the tax increase might have affected some smokers differentially. No interactions were significant, so the model is reported without them.

Owing to a slight overrepresentation of older and women smokers, weights were applied in descriptive analyses to adjust for sex, age and region, according to the NSW population,11 to provide estimates of quitting activity in this population. Unweighted data were used for regression analyses. All analyses were conducted using SPSS version 18.0 (IBM, Armonk, NY, USA).

The CITTS is approved by the NSW Population Health Services Research Ethics Committee.

In 2009, of 67 753 telephone numbers randomly selected for the survey, 41 689 (62%) could be assessed for eligibility (others were non-contactable or non-respondents) and eligible individuals were contacted at 7246 (17%) of these. Of those eligible, 2500 (35%) people consented to participate and completed the survey. Rates of consent were consistent across the months; the final sample size for February to September 2009 was 1604.

From January to September 2010, 47 243 telephone numbers were randomly selected, 28 287 (60%) could be assessed for eligibility and 4564 (16%) eligible individuals were identified. Of these, 1792 (39%) consented and completed the survey. The final sample size for February to September 2010 was 1699. The demographic characteristics and smoking data for the two samples are shown in Box 2.

In the month after the tax increase, 22% of current smokers quit or attempted to quit smoking, compared with 13% in the previous month. Box 3 shows the proportions of smokers and recent quitters who reported quitting activity in the months before and after the tax increase in 2010, and in the corresponding months in 2009. After the tax rise, there was an almost 70% increase in the rate of quitting activity from April to May. This increase was sustained at least somewhat throughout June and July before decreasing again in August and September. For comparison, in May 2009, only 12% of current smokers reported any quitting activity.

To date, very few studies able to examine associations between a cigarette tax increase and smoking cessation have been conducted using population-based survey data. Our findings indicate that quitting activity increased substantially in the months immediately after the 2010 tax increase, suggesting a direct link between the price increase and smoking cessation. By examining individual-level data, this result extends previous research linking tax increases to decreases in cigarette sales data,2,3 and to smoking prevalence.6 Extrapolating from our data, if 22% of the NSW smoking population quit or attempted to quit in the month of May 2010, this would be more than 200 000 smokers, almost double the number who stopped smoking or tried to quit in April before the tax increase.

Despite the increase in quitting activity in the months immediately after the tax increase, after 3 months quitting activity fell back to previous levels. A possible explanation for this might be that tax increases provide an impetus for smokers who are ready to quit, reinforcing their latent motivations. Once the smokers who are ready to quit make an attempt, the pool of ready-to-quit smokers can become depleted, and further increases in the rate of quit attempts may be unlikely. Our study, however, could not investigate this possibility, which would require an analysis of whether reductions in smoking prevalence are sustained after a tax increase. Additionally, our study did not examine the effect of the tax increase on rates of smoking uptake, which is another possible response to taxation, and one that may not decrease over time in the same way as the effect on quitting activity. Nonetheless, the pattern of increased quitting activity returning to pre-tax levels after 3 months highlights the need for regular tax increases to motivate smokers to act on their desire to quit.

Other studies have used surveys of smokers to explore cessation activity stimulated by tax increases. In a survey of Massachusetts smokers after a 25 cents per pack tax increase in the early 1990s, 44% of smokers who quit after the tax rise reported that the price increase had had at least some effect on their quitting, and 35% of continuing smokers reported that the tax increase made them consider quitting.12 However, this survey relied on retrospective recall and was conducted about 9–15 months after the increase. In population surveys conducted after five successive tax increases in Germany, 4%–8% of smokers reported that the tax increases had prompted them to quit, with an increased likelihood of cessation activity associated with a greater price increase.13 Recent evidence from the United States and Canadian International Tobacco Control (ITC) projects has shown that smokers living in areas with higher tobacco prices are more motivated to quit, and have an increased likelihood of actually quitting.14 In the ITC survey in Mexico, the number of smokers reporting serious attempts to quit in the past year increased in the year after a tax rise; however, this study was also conducted many months after the tax increase and relied on retrospective recall.15

Although our study presented a unique opportunity to assess quitting activity in NSW after the tobacco tax increase, it is subject to certain limitations. First, the data are based on retrospective reports of quitting as opposed to a longitudinal follow-up of individuals who quit. Second, the somewhat low response rate of the survey might have led to some bias in the sample composition. However, this response rate is similar to that of other population telephone surveys in Australia16 and the US,17 and recent studies have indicated that differences in response rates have frequently shown only minor effects on key estimates.18 Additionally, the overall rates of quitting in our sample are similar to those of larger population surveys of NSW smokers.19 Finally, our analyses did not account for variations in other policy or program influences on smokers during this period, such as media campaigns or legislation. However, there were no substantial changes to tobacco control policies implemented in NSW in May 2010.

The results of our study show that the 2010 tax increase was associated with an increase in the number of smokers making quit attempts and quitting, but this activity was not sustained in the long term. In 2009, the National Preventative Health Taskforce proposed that smoking prevalence in Australia could be reduced to 9% by introducing, among other things, a 49% increase in the average price per cigarette (from $0.45 to $0.67, or greater than $20 per pack).4 The tax rise in 2010 increased the price by 25%. If the tax was further raised to the rate that the Taskforce recommended, the increase in quit attempts may contribute to a substantial decrease in smoking prevalence. Such tax increases, however, need to be accompanied by appropriate cessation, prevention and education efforts to stimulate interest in quitting and support quit attempts.

3 Percentage of smokers and recent quitters (95% CI) reporting quitting activity in the months before and after the 2010 tobacco tax increase, and in the corresponding months in 2009 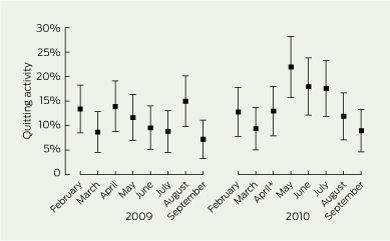