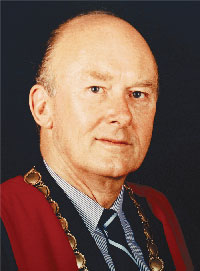 Keith William Shaw served as a pilot in the Royal Australian Air Force from 1942 to 1945, and graduated in medicine from the University of Queensland in 1949.

From 1953 to 1984, he was a general practitioner in Kingaroy, Queensland. After he retired, he continued to work intermittently as a locum until he retired fully in 1998.

In 1971, Keith became a Fellow of the Royal Australian College of General Practitioners (RACGP). He was Provost of the RACGP Queensland Faculty from 1974 to 1975 and Chair of its Board from 1979 to 1980.

From 1980 to 1982, he served as RACGP President. During his presidency, Keith travelled widely throughout Australia in his own “little airplane”. Ably assisted by his wife Anne as his copilot, he crossed the Bass Strait more than once and the Nullarbor several times. As President, he also encouraged the development of reciprocal ties with other colleges in the Asia–Pacific region. In particular, he organised assistance for the conduct of examinations in the Singaporean, Malaysian and Hong Kong colleges.

Keith was a great advocate for general practice, especially in rural areas. He was active in the Family Medicine Programme and Australian General Practice Training and taught a generation of students and registrars in his Kingaroy practice, where they learnt about continuing and comprehensive care from an expert. He was also a very strong supporter of the Royal Flying Doctor Service.

His contribution to Australian general practice was recognised with honours including Officer of the Order of the British Empire, Life Fellow of the RACGP in 2008, and Fellow of the Australian Medical Association in 1983.

Keith died peacefully at his Kingaroy home on 25 March 2011, aged 88 years. He is survived by his wife Anne and three children.