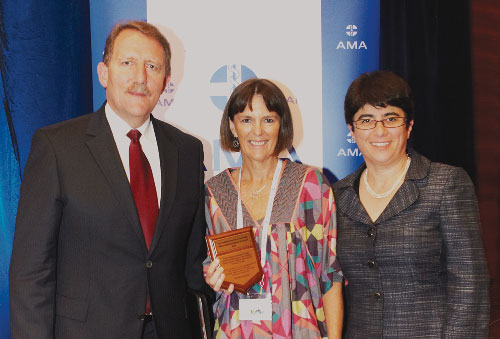 Amanda Leach (centre), coauthor of the winning article and recipient of the 2010 MJA/Pfizer Research Award, with Bill Ketelby, Country Medical Director of Pfizer (left), and Annette Katelaris, Editor of the MJA (right).

I am pleased to announce the winner of the Medical Journal of Australia/Pfizer Australia Research Award for 2010. This $10 000 award recognises and rewards the best original research published each year in the Journal, and was presented at the annual Australian Medical Association National Conference in May this year.

This year, the Journal’s Content Review Committee awarded the 2010 prize to Peter Morris and his colleagues from the Menzies School of Health Research, Charles Darwin University and the Northern Territory Clinical School of Flinders University in Darwin and Royal Prince Alfred Hospital in Sydney for their article, “Single-dose azithromycin versus seven days of amoxycillin in the treatment of acute otitis media in Aboriginal children (AATAAC): a double blind, randomised controlled trial”. This trial was funded by the National Health and Medical Research Council and the report was published in the Medical Journal of Australia on 4 January 2010.

Acute otitis media, particularly perforation of the tympanic membrane, is a major public health problem among Aboriginal children. Only one in 10 children has bilaterally normal ears and hearing. This research group has previously found that long-term antibiotic treatment resolves middle ear effusion and prevents perforation.

Because of often poor compliance with treatment regimens over several days, this trial compared a one-off intervention with a standard 7-day regimen. They found that single-dose azithromycin was more effective than a 7-day course of amoxycillin at eliminating the bacterial pathogens, but it was not more effective at curing acute otitis media in this population. Disturbingly, both treatments failed in half the cases treated. The group is now evaluating a double-dose regimen of azithromycin.

This was the first randomised controlled trial of antibiotic treatment of acute otitis media in a population with high rates of acute and chronic tympanic membrane perforation. Because single-dose therapy virtually ensures treatment compliance, the findings of this study are potentially practice changing.

This award has been sponsored by Wyeth Australia since 1995. We are grateful for their support over the years, and now welcome Pfizer, who acquired Wyeth in 2009, as our cosponsor. The award was presented by Dr Bill Ketelby, Country Medical Director of Pfizer.

Pfizer had no role in the study or in the choice of a winner, and it was purely coincidental that a drug that is manufactured by the company was used in the study.