Objectives: To highlight a fun activity — the sport of wife carrying — and to investigate factors associated with better performance.

Results: The mean age for male participants was 32.6 (SD, 8.7) years and for female participants, 30.5 (SD, 9.2) years. The mean finishing time was 98 s. Finish times tended to be somewhat slower as the age of the male partner increased (P = 0.06), but not as the female partner’s age increased (P = 0.89). Race experience was not associated with faster times (P = 0.88). Estonians were almost 12 s faster than other nationalities, although this was not statistically significant (P = 0.25), probably due to the small number of Estonians. Men who engaged in endurance-type physical activities as hobbies (P = 0.003), or in both endurance- and strength-building activities (P = 0.001), were significantly faster than those who did neither. Among women, strength-building (P = 0.03) but not endurance-type (P = 0.36) physical activities were significantly associated with faster race times.

Conclusions: Wife carrying can be a novel option for increasing physical activity levels, which improve health. Although some key data were unavailable, such as wife’s body weight, and injury rates, this study identified several factors associated with better performance in this sport.

Physical activity enhances longevity, but the world’s population is insufficiently active.1 Although the reasons for this are complex, one barrier is that exercise is perceived as boring: a multicountry survey found that 61% of respondents would exercise more if it were fun.2

In searching for novel approaches potentially able to address both these risk factors, we studied a little-known activity: the sport of wife carrying.

The origin of wife-carrying races lies in the legend of Rosvo-Ronkainen, a Finn living in the 1800s who led men in raiding villages for food and women, carrying the women on their backs as they ran off.4 The Finnish word eukonkanto is colloquially translated as “wife-carrying race” in English; a more accurate translation is “old hag-carrying race”.

The Wife Carrying World Championship began in 1992 at Sonkajärvi, Finland, and has been held annually since then. Contestants are winning couples from wife-carrying competitions in Australia, Estonia, Finland, Germany, Great Britain, Ireland and the United States. The competition4 involves the man running along a 253.5 m track with three obstacles, carrying his “wife”. This “wife” must weigh at least 49 kg, or be weighted to 49 kg. The “wife” need not be your own, but can be “the neighbour’s”.4 As a health bonus, the winner receives the “wife’s” weight in beer, known to improve cardiovascular health when consumed in moderation.5

Here we explore what factors predict better performance in this race.

Two investigators (S T, P O) travelled to Sonkajärvi to extract available participant and race data for all years 1992–2010. Participant data and finishing times were available from race organisers. Couples provided the following on race entry forms: year of birth, previous participation in such races, country/countries of origin, and up to two hobbies for each participant.

To investigate factors associated with faster race times, we used least squares linear regression with finishing time as the dependent variable, and the following independent variables: age (continuous); race experience (first time, experienced); man’s country (Finland, Estonia, other; woman’s country was excluded since 93.4% belonged to the same country as that of their race partner); and physical activities of man and woman (coded based on hobbies into endurance-type physical activities only, strength-building only, both types of activities, or neither). We analysed data using SPSS version 16.0 (SPSS Inc, Chicago, Ill, USA).

Approval of the study by the local ethics committee was not sought as the race organisers provided permission to use the de-identified data collected on race forms.

The mean finishing time for the included couples was 98 s (SD, 34 s). Older men had a slight speed disadvantage of 0.86 s slower for each year older (borderline significance) (Box 1). Female age was unrelated to finishing time, as was race experience (Box 1). Estonians were faster than Finns by 12 s; however, this was not significant, most likely because there were only 11 Estonian couples (Box 1).

Over the first 19 years of the annual Wife Carrying World Championship, we identified several factors associated with faster wife-carrying times. Estonians had faster times, although not significantly faster (most likely due to the small sample). Estonians have developed a technique, referred to as the “Estonian carry”, where the “wife” hangs upside-down with her legs around the husband’s shoulders, holding onto his waist (photograph next page).

As expected, participation in endurance-type activities helped men race faster; however, among women, strength activities were associated with better race times, but endurance activities were not. This may be because a stronger woman can cling more tightly to the man, providing a more streamlined form while racing.

To our knowledge, this is the first study investigating faster performance in a wife-carrying competition. More research needs to be done, since our study was limited by the data available on race entry forms, leading to missing data on many couples and potential bias. While included couples probably represented the field, participants were a self-selected sample. We lacked information on potentially important factors (eg, wife’s body weight). We also lacked data on how best to train for such races (and therefore cannot ascertain whether current physical activity guidelines suffice6) and injury rate. We acknowledge the potential for injury associated with this sport; clearly, this activity is not recommended for everyone. In contrast to the sport of wife carrying, much detailed research is conducted for soccer.7,8 Soccer, immensely popular worldwide, shares similar health-bestowing characteristics — exercise, social relationships (teammate camaraderie), and beer (flung by opposing team fans) — with wife carrying. 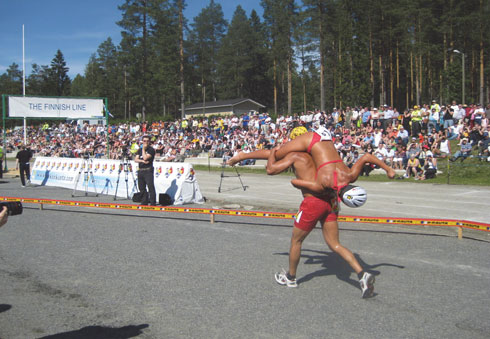 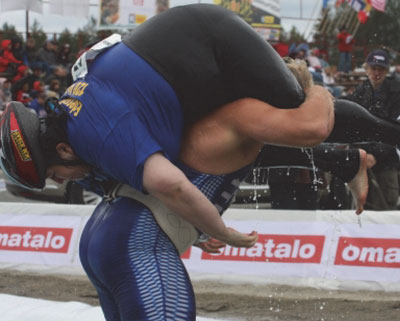 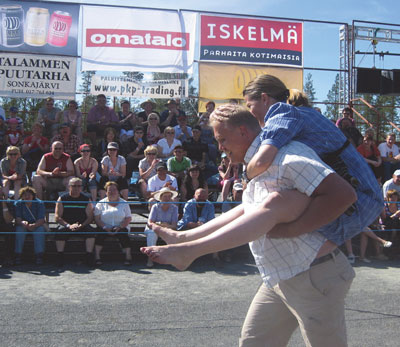 We thank Eero Pitkänen from the municipality of Sonkajärvi, Finland, for generously providing data and photographs; and Christoph Wenger from the Institute of Sport Science, University of Graz, Austria, and Willibald Stronegger from the Institute of Social Medicine and Epidemiology, Medical University of Graz, Austria, for their assistance with data analysis.