A husband and wife became unwell after eating a fish from the Calder River in northern Western Australia. Gnathostomiasis was diagnosed, and treated with ivermectin and albendazole. Serological testing was positive for gnathostomiasis, and there has been no recurrence. These appear to be the first proven endemically acquired cases of gnathostomiasis in Australia, and demonstrate the difficulties in diagnosis and treatment. (MJA 2011; 195: 42-44)

A 52-year-old man developed epigastric discomfort, nausea, diarrhoea and lethargy 10 days after eating a fish (identified by the patient as “black bream”, possibly Acanthopagrus berda or Hephaestus jenkinsi) caught from the Calder River in northern Western Australia (Box 1). The fish had been pan-fried whole over a camp fire, but the duration and thoroughness of cooking is unclear. The patient’s epigastric discomfort persisted, followed a week later by fevers and myalgia and then pruritic subcutaneous swellings and skin thickening over his chest and abdomen. He had no response to a prescribed course of antibiotics. His abdominal symptoms and myalgia continued and, over the next 2 months, multiple episodic swellings developed over his abdomen. The swellings progressed to involve both thighs and were associated with feelings of movement under his skin.

A presumptive diagnosis of parasitic infection was made, and ivermectin 12 mg was prescribed. Rapid improvement occurred, with a reduction in the patient’s eosinophilia to 1.6 x 109/L. Serological evaluation for schistosomiasis, cysticercosis, filariasis, angiostrongyliasis and strongyloides was negative. Eight weeks later, recurrent swelling of the patient’s right leg was treated with ivermectin. Three months later, further cutaneous symptoms were treated with three doses of ivermectin, with a subsequent eosinophil count of 0.44 x 109/L.

A serological test for gnathostomiasis was positive (24 kDa immunoblot test conducted by the Department of Helminthology, Mahidol University, Bangkok, Thailand) 8 months after initial onset of symptoms. A simultaneous enzyme-linked immunoabsorbent assay (ELISA) for Gnathostoma antibody was positive (titre, 0.901 at 1:20 dilution), and a repeat ELISA 14 months later showed a similar titre (0.823 at 1:20 dilution). No earlier blood sample was available to demonstrate seroconversion. There has not been any recurrence of symptoms or eosinophilia over the subsequent 6 years.

A 50-year-old woman (Patient 1’s wife) developed fevers and lethargy 12 days after eating the same fish as her husband. Vomiting and abdominal cramps followed, and settled down over 10 days. When she returned to Melbourne 4 months later, the patient’s blood samples revealed an eosinophilia of 1.6 x 109/L. A further 4 months later, a trial of ivermectin (12 mg weekly for two doses) was prescribed for gnathostomiasis, and 4 months later her eosinophil count was 0.23 x 109/L. Serological testing for amoebiasis, strongyloides, filariasis and schistosomiasis was negative. A test for gnathostomiasis (24 kDa immunoblot) was positive 8 months after initial symptoms. An ELISA for Gnathostoma was also positive 8 and 20 months after initial symptoms, with little change in titre (0.903 and 0.886, respectively). Sixteen months after the initial symptoms (9 months after ivermectin), a pruritic swelling over the upper right arm developed with associated eosinophilia. Eosinophilia and chronic symptoms resolved following a single dose of ivermectin 12 mg, and albendazole 400 mg twice daily for 21 days. Two months later, a transient pruritic swelling over the right buttock was treated with repeat ivermectin (12 mg weekly for two doses). Subsequently, the patient had recurrent swelling of the right deltoid muscle and was given three further ivermectin doses. Symptoms have not recurred during 5 years of observation.

Gnathostomiasis is a foodborne zoonosis, a clinical syndrome caused most commonly by infection with the larvae of Gnathostoma spinigerum, but also by several other Gnathostoma species.1,2 Humans may become accidental hosts after ingesting third-stage larvae (Box 2). The larvae are unable to mature further in humans, and they migrate through visceral and cutaneous tissues. Larvae may be found in a range of intermediate and paratenic hosts including freshwater fish, snakes, frogs, snails and fowl.1,3 Consequently, the disease is endemic where these foods are consumed raw or undercooked, including South-East Asia and Japan, but more recently recognised in Latin America, China, India, Africa and in travellers returning from these areas.1,2 Locally acquired infection in Australia has not previously been confirmed.4 The Gnathostoma life cycle is illustrated in Box 2.

Following ingestion of viable larvae, patients often develop fever, anorexia, abdominal discomfort, nausea and vomiting as larvae penetrate the gastrointestinal wall. This is usually associated with a marked eosinophilia. Subsequently, symptomatic disease may have either cutaneous or visceral manifestations depending on the larval migration pattern. Cutaneous disease is more common, typically presenting with intermittent migratory erythematous swellings, which may be pruritic or painful. Cutaneous symptoms usually occur within 4 weeks of larval ingestion, and last 1–2 weeks. In untreated patients, larvae may survive up to 15 years and cause recurrent symptoms, by which time eosinophilia may have resolved. Less common cutaneous manifestations include nodular lesions, skin abscesses, panniculitis or creeping eruptions. The main differential diagnoses include cutaneous larva migrans, larva currens, trichinosis and Calabar swellings secondary to loiasis.

Visceral disease may involve almost any part of the body. Pulmonary disease may manifest as a cough, pleuritic chest pain, haemoptysis, lobar consolidation or pleural effusions. Gastrointestinal disease may be asymptomatic, but is more frequently associated with sharp abdominal pains or inflammatory masses, or may mimic an “acute surgical abdomen”. Ocular disease has a variety of manifestations and often allows direct visualisation of the larvae. Untreated, gnathostomiasis of the central nervous system (CNS) is associated with the highest mortality (8%–25%), and 30% of survivors have long-term sequelae.1 Typically, symptoms begin with acute radicular pain or headache, lasting up to 5 days, as the larva penetrates the CNS via spinal cord nerve roots. Focal paralysis and cranial nerve palsies usually follow, and may progress to eosinophilic meningoencephalitis or encephalomyelitis. Subarachnoid haemorrhage and other vascular complications are less common presentations of CNS gnathostomiasis. Imaging reveals the haemorrhagic migratory tracts of the larvae. The main differential diagnosis for CNS disease is Angiostrongylus cantonensis.

Definitive diagnosis of gnathostomiasis requires parasite extraction and identification, however small parasite size (2–3 mm) makes this impractical, and thus is no longer recommended. Therefore, gnathostomiasis is a clinical diagnosis, supported by epidemiological history, blood eosinophilia (although alone not sensitive or specific) and serological testing. Serological tests have surpassed non-specific antigen injection techniques, and include immunoblot testing (which detects antibodies to specific L3 antigen with a molecular mass of 24 kDa) and ELISA (which detects IgG1 or IgG2 to the crude L3 antigen).6-8

An ELISA to detect subclass immunoglobulin levels for crude L3 antigen, avoiding the difficult purification step, has been proposed as an alternative diagnostic test. Detection of IgG1 has the greatest sensitivity (98%) making it an attractive initial test, and IgG2 does not appear to cross-react with other parasitic species, thus providing the best specificity (88%) for diagnostic confirmation of gnathostomiasis.7 Neither test is available commercially, but both the immunoblot and ELISA are performed at the Department of Helminthology, Mahidol University, Bangkok, Thailand. Nevertheless, serological investigations for gnathostomiasis have limited validation, making precise estimates of sensitivity and specificity difficult. Cross-reactions may occur, so caution with interpretation is paramount. In the patients described, an evaluation for other parasitic infections was made in order to reduce the possibility of a false positive result.

Data comparing the outcomes of treatment regimens are limited to observational studies only. In a series of 49 patients treated with albendazole 400 mg twice daily for 21 days, over 93% achieved a cure at 6 months.9 In the same series, the efficacy was similar in 21 patients treated with ivermectin 0.2 mg/kg as a single dose.9 There are few data comparing combinations of ivermectin and albendazole. Longer observational studies indicate that treatment failures are common, as demonstrated in the two patients above, and thus repeat treatment is recommended if symptoms recur.10

Proven endemic human gnathostomiasis has not previously been reported in Australia, although cases suspected to have been locally acquired were described in the 1970s (non-specific antigen injection was used for confirmation).4 Gnathostoma infection of mammals has been described in Australia.11,12 Therefore, we believe these cases are the first confirmed cases of locally acquired human gnathostomiasis in Australia. The two patients had clinical syndromes compatible with gnathostomiasis, associated blood eosinophilia, positive serological results and supportive epidemiological history, and they responded to treatment. Importantly, neither of the patients had previously travelled outside Australia. Weaknesses of this report include that we were unable to definitively identify the fish species or determine how thoroughly the fish was cooked.

Although it is a rare disease, gnathostomiasis needs to be considered in patients coming from endemic areas, and also in patients who have not left Australia, who present with migratory cutaneous lesions and associated peripheral blood eosinophilia. Visceral disease may be more difficult to diagnose due to the broad differential diagnoses, but gnathostomiasis must be considered in those with eosinophilic neurological syndromes due to the high mortality in untreated disease. 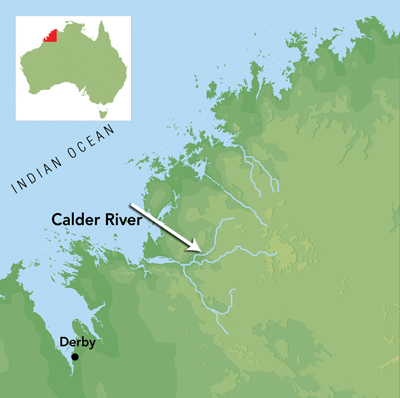 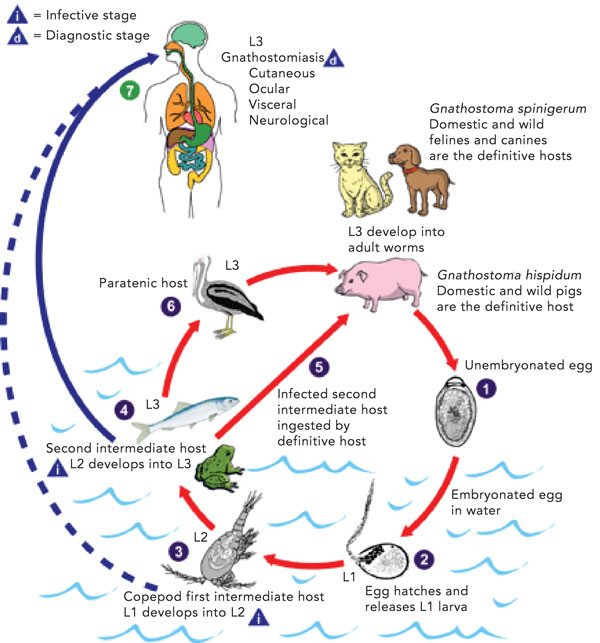