A 64-year-old woman who had never consumed alcohol presented to hospital with a several-day history of vomiting and severe diarrhoea, secondary to Clostridium difficile colitis. She had suffered a similar episode 3 months earlier. Her symptoms settled after 7 days’ treatment with vancomycin and metronidazole, but her admission was complicated by nosocomial pneumonia and her oral intake was poor. Fifteen days into her stay, she became drowsy and less communicative and developed generalised weakness.

Clinical examination revealed signs of encephalopathy. She had slowed mentation, paucity of facial expression and slow limb movements. She could follow one-stage commands but only slowly and with significant prompting. Her eye movements were normal. She had mild generalised weakness in all four limbs, but her deep tendon reflexes were intact and plantar responses were downgoing. Ataxia could not be assessed reliably due to impaired consciousness.

Given the clinical history of dietary deprivation and colitis, together with the typical radiological changes, a diagnosis of Wernicke’s encephalopathy was strongly suspected. Hence, intravenous thiamine 500 mg three times a day was administered, after which the patient made a dramatic clinical and radiological recovery (Box 1, D–F) over a period of about 7 days. Despite this, her pretreatment (Day 15) blood thiamine pyrophosphate level, measured using high-performance liquid chromatography, was eventually reported as being normal (136 nmol/L [reference range, 67–200 nmol/L]). However, given her clinical history, the changes noted on MRI and the dramatic improvement in her condition with thiamine, the diagnosis of Wernicke’s encephalopathy remained the most likely explanation.

Wernicke’s encephalopathy is caused by thiamine deficiency and is most commonly associated with heavy alcohol intake paired with poor nutrition.2 However, the same phenomenon can occur in non-alcoholic patients with a very low dietary thiamine intake — for example, in patients who undergo prolonged therapeutic fasting or gastrointestinal (particularly bariatric) surgery, and in patients with recurrent vomiting or diarrhoea.3 It has also been reported after prolonged febrile illnesses, where thiamine requirements may be increased and where there is also inadequate oral intake.3 If not recognised, Wernicke’s encephalopathy can progress to Korsakoff syndrome, resulting in profound working memory deficits, or may even be fatal.4 In a healthy person, reserves of thiamine are estimated to be exhausted after only 2–3 weeks of dietary deprivation.3 In this case, we hypothesise that nutritional deficiency developed due to the patient’s ongoing vomiting and diarrhoea, combined with a catabolic state from her severe pneumonia, and that thiamine stores may already have been depleted from her previous bout of Clostridium difficile infection.

Clinically, patients with Wernicke’s encephalopathy classically present with the triad of global cognitive deficits, eye signs (nystagmus and/or ophthalmoplegia) and ataxia,4 although there are also less common clinical features (Box 2). However, autopsy reports of pathologically confirmed cases of Wernicke’s encephalopathy indicate that only 16% of patients have the triad, 19% have no clinical signs at all, and the most common presentation is isolated cognitive changes (eg, impaired consciousness or disorientation).4,5 This is consistent with the clinical findings in our patient and emphasises the need to consider Wernicke’s encephalopathy as a diagnostic possibility even when the classic triad is absent.

In the past decade, magnetic resonance imaging (MRI) has been recognised as a useful adjunct in Wernicke’s encephalopathy diagnosis.6 Wernicke’s encephalopathy typically causes symmetrical alterations in MRI signal intensity (increased on fluid-attenuated inversion recovery [FLAIR] images) in the periventricular regions of the brain, including the medial thalami, periaqueductal grey matter, tectal plate (inferior and superior colliculi), and mamillary bodies.1,7 It has been suggested that MRI changes which occur in alcoholic and non-alcoholic patients with Wernicke’s encephalopathy may differ, with contrast enhancement of the mamillary bodies and thalami occurring more frequently in the alcoholic patients, suggesting that these areas may be selectively susceptible to alcohol toxicity.7

Our patient’s normal thiamine level is also of interest. Thiamine functions as a coenzyme in the metabolism of carbohydrates, lipids and some amino acids and is involved in myelin sheath maintenance and neurotransmitter production.2 One would, by definition, expect a low thiamine level in Wernicke’s encephalopathy. However, thiamine assays have well recognised limitations. Serum thiamine levels are a poor measure of thiamine status.2 Until recently, many laboratories have used thiamine transketolase activation assays; however, these have also been reported to lack specificity, as well as being technically difficult.3 Many laboratories in Australia have moved to using high-performance liquid chromatography with fluorescent detection to measure thiamine pyrophosphate — the physiologically active form of thiamine — in whole blood, as done for our patient. This assay is thought to have improved reproducibility,2 but has also been noted to have weaknesses relating to the standardisation process of its complicated chromatographic methods (Ronda Greaves, Chair, Vitamins Working Party, Australasian Association of Clinical Biochemists, personal communication).

In addition, although these assays give an estimate of whole-blood thiamine levels, they do not necessarily reflect intracerebral thiamine levels. Thiamine is predominantly transported across the blood–brain barrier by a slow, carrier-mediated process,8 hence Wernicke’s encephalopathy cannot be diagnosed simply by measuring the circulating thiamine level.9 In our case, the patient’s clinical presentation, MRI changes and rapid clinical and radiological recovery in response to administration of thiamine provide support for the diagnosis of Wernicke’s encephalopathy, despite the normal thiamine level. Further, it is critical to remember that while thiamine assays usually take several days, early initiation of thiamine is vital to prognosis9 and clinical response to thiamine is the most reliable diagnostic test.3

In conclusion, this case highlights the challenges of recognising Wernicke’s encephalopathy and the importance of prompt diagnosis. Given the underdiagnosis of Wernicke’s encephalopathy,4 the often incomplete clinical presentation of the condition, and the low toxicity of thiamine,2 a low clinical threshold is warranted for initiating thiamine therapy in patients with cognitive changes and significant predisposing factors for dietary thiamine deficiency. Clinicians should maintain a high index of suspicion when such risk factors are present. The characteristic MRI changes should also be looked for. Thiamine assays may help confirm suspicions but a normal thiamine level does not exclude the diagnosis. As this case demonstrates, early thiamine replacement can fully reverse the clinical and radiological features of this potentially devastating condition. 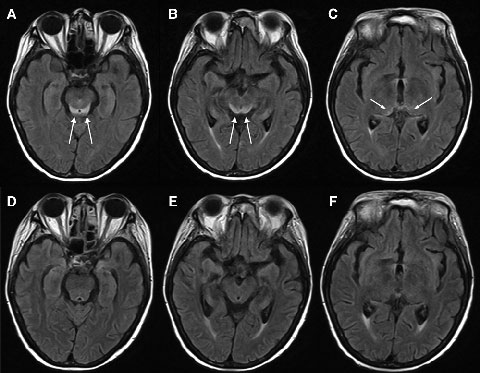