Ronald Nicolson O’Reilly was born on 18 January 1921 in Winton, Queensland. Raised in Winton and Barcaldine, he went to Brisbane Boys’ College, and then studied medicine at the University of Queensland, graduating in 1945. 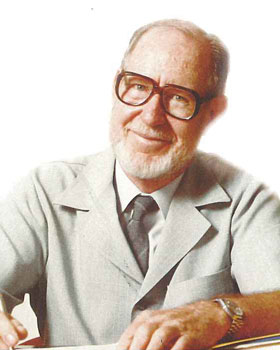 Ron completed his residency at Brisbane General Hospital and established a general practice in suburban Chermside. He soon realised that his vocation was with children, and undertook training in paediatrics at the Royal Children’s Hospital in Melbourne.

He was very highly regarded in Melbourne as a clinician and researcher, but in 1957, Ron returned to Brisbane, where he worked as a physician and then Deputy Medical Superintendent at the Royal Children’s Hospital. In 1961, he received his doctorate from the University of Melbourne for his thesis on bronchiectasis.

In 1962, Ron was appointed Senior Visiting Paediatrician at the Royal Children’s Hospital, where he remained until mandatory retirement at age 60 in 1981. He also entered private practice on Wickham Terrace, which he continued until he was in his seventies.

In 1975, Ron became a Member of the Royal Australasian College of Physicians and, in 1978, a Fellow. Ron was an outstanding teacher and clinician, and he cared for many doctors’ children — an expression of the respect held for him. He served on the boards of the Asthma Foundation of Queensland, Montrose Home for Crippled Children, Xavier Home, Tufnell Home, and St Helen’s Hospital as it evolved into the Wesley Hospital.

Ron retired from practice in 1994 to live on Bribie Island, where he became very active in the Bribie Island Environmental Protection Association.

His wife Elva, who had been a great support in his work, predeceased him by 22 years. Ron died on 13 September 2010, soon after suffering a massive stroke. He is survived by his son Graham, daughter Annise, and several grandchildren who appreciated his wise and gentle counsel.

For those of us who came under his influence, memories of an excellent clinician and stimulating teacher will endure. He did not seek honours or awards but deserved many.