Visual field defects typically caused by lesions in the optic nerve or optic chiasm may be caused indirectly by subdural haematomas. A 61-year-old man survived transtentorial herniation caused by subdural haematomas that resulted from shaking his head in an attempt to remove a cockroach impacted in his external auditory canal. Bilateral incomplete posterior cerebral artery infarction of both inferior tips of the occipital lobe resulted in bilateral superior quadrantanopia. There are no previous reports of tentorial herniation causing this permanent outcome. (MJA 2011; 194: 420-422)

A 61-year-old man presented to the emergency department with a 3-day history of worsening headache and drowsiness. He had a past medical history of renal calculi and gout and was not taking any regular medication. He had a history of consuming 5–6 standard units of alcohol per day, but no antecedent falls or head injury were reported. On physical examination, his Glasgow Coma Scale (GCS) score was 15/15 and his vital signs were normal, apart from mild hypertension (154/80 mmHg). His right pupil measured 4 mm, and his left pupil, 3 mm. His reflexes were documented as brisk in the upper limbs. Results of liver and coagulation studies were normal.

A cerebral computed tomography (CT) scan showed large bilateral frontoparietal subdural haematomas (Box 1, A). The right-sided haematoma had mixed hyperdense and isodense areas suggestive of acute on subacute bleeding, while the left frontal haematoma was isodense. The CT scan also showed marked mass effect (Box 1, B) and early tentorial herniation of the uncus (Box 1, C) without tonsillar descent. There was a delay of 8 hours, including transfer of the patient to a neurosurgery centre, before surgery. The patient’s medical notes showed that before undergoing surgery he had developed bilateral extensor Babinski responses and had a GCS score of 14/15. One hour before the operation, the nursing records indicated “GCS 13/15, patient too drowsy and disoriented to consent [to surgery]”. No further imaging was undertaken and no further notes were made before surgery.

The patient made an uneventful recovery after bilateral craniotomy and drainage. A CT scan of the brain on discharge about a week later confirmed evacuation of the haematomas and normalisation of brain position.

During routine follow-up 10 weeks later, the patient reported persistent difficulty with reading since the operation and that he was experiencing problems differentiating colours. His visual acuity was found to be 6/5 in the right eye and 6/18 in the left, with symptoms of defective colour vision (3/14 Ishihara plates correctly identified with the right eye, and 4/14 with the left). A minor cataract was found in his left eye, but there was no other intraocular abnormality in either eye. His optic discs appeared healthy without pallor in both eyes (and remained so on further follow-up several years later). Computerised visual field perimetry testing conducted at 10 weeks showed bilateral superior altitudinal defects (Box 2). Routine visual evoked potentials showed normal latencies. However, multifocal visual evoked potentials showed normal latencies with decreased amplitude in superior fields bilaterally.

Magnetic resonance imaging (MRI) of the brain and orbits conducted 6 months after the surgery showed chronic infarction involving the inferior tip of both occipital lobes medially, more marked on the right side (Box 1, D and E). There was evidence of residual blood products from the evacuated bilateral subdural haematomas, with no evidence of new bleeding. There was no abnormality of the optic nerves or optic chiasm, and venous drainage on magnetic resonance venography was normal.

Upon further questioning at this time, a reason for the apparent spontaneous subdural haematomas became evident. The patient described an incident 7 weeks before admission when he awoke with an insect inside his ear. Despite, in his words, “shaking my head from side to side and banging on the side of my head with my fist”, the patient was not able to get the insect out. He was seen at the emergency department, where his ear was syringed and, eventually, a German cockroach (Blatella germanica) was removed with further shaking of the head (which was documented in the hospital records). He recalled a marked headache for the next 2 weeks, which gradually subsided. Recurrence of the headache 5 weeks later prompted him to present to the emergency department again, and the subdural haematomas were detected.

This is an unusual and to the best of our knowledge a novel case of bilateral visual field defects related to earlier impaction of a cockroach in the external auditory canal.

Subdural haematoma is an uncommon cause of bilateral homonymous hemianopia.1 It can occur as the result of direct local injury to the occipital lobes, or alternatively, mass effect from subdural haematoma can result in tentorial herniation, potentially compromising the blood supply of the posterior cerebral artery (PCA) and placing the regions it supplies at risk. Visual field defects as a consequence of this indirect effect of subdural haematoma have been reported in some surviving patients, but posterior cerebral infarction is more commonly recognised in postmortem examinations of the brain.2-4

Altitudinal visual field defects are typically due to optic nerve lesions and are usually unilateral. Theoretically, the minimal lesion required to produce a bilateral superior quadrantanopia is one located in the inferior optic chiasm; however, this occurs rarely. Typically, injury causes splaying of the chiasm, which is more commonly associated with bitemporal hemianopia. Transtentorial herniation is a well recognised cause of uncal and brainstem displacement and third cranial nerve palsy, but it can also cause stretching and compression of the PCA — thereby compromising the blood supply and leading to infarction.4,5 Survival from tentorial herniation with residual bilateral homonymous hemianopia has been occasionally reported in the literature.6-9 To date, there is no documentation of it causing bilateral superior quadrantanopia. The regions of the brain at risk secondary to PCA ischaemia or infarction are the inferior and medial temporal and occipital cortices. The actual area of involvement depends on which tributaries (and distributions) are affected. The calcarine branch of the medial occipital artery, which supplies the medial occipital lobe, is most commonly involved.10,11

In our patient, there was evidence of mass effect and tentorial herniation secondary to the enlarging subdural haematoma. This would have placed the PCA blood supply at risk. The MRI findings of bilateral infarction of the inferior tip of the medial occipital lobe, together with field test findings of bilateral superior altitudinal defects, confirm the involvement of the visual cortex, which is topographically organised with the cortical representation of the superior field localised inferiorly.5,12 The affected region corresponds to the striate cortex and most posterior part of the prestriate cortex. Both areas are involved in aspects of colour visual processing, suggesting an explanation for the patient’s defective colour vision despite a normal optic chiasm and optic nerves, although a congenital cause cannot be excluded.13

The patient’s history of daily alcohol consumption may have predisposed him to bleeding tendencies and subdural haematomas, although results of his liver and coagulation studies were normal.

A diagnosis of acute on subacute subdural haematoma fits well with the timing of the patient’s violent attempts to remove a foreign body from his ear about 7 weeks previously, and with subsequent delayed re-bleeding and increasing supratentorial pressure resulting in uncal herniation and infarction of the part of the primary visual cortex known to correlate with the superior visual fields. A preferred method of removing a cockroach from the ear canal is to drown it with non-toxic vegetable or mineral oil so it can then be easily extracted with forceps. Cautious suction can also be used, taking care not to cause barotrauma by occluding the canal. Lignocaine 2% also rapidly kills the insect or results in it leaving the canal, but entry of lignocaine through any perforation into the middle ear can produce severe sustained vertigo with nystagmus for some hours.14-17 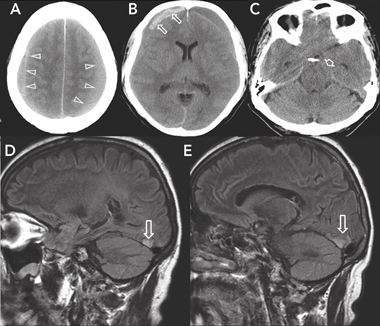 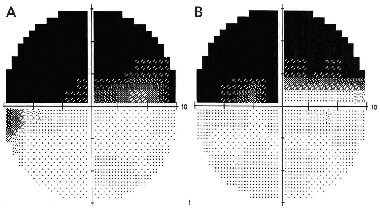 The left superior and right superior visual fields are abnormal for both eyes (black areas). The left superior quadrant is slightly worse for both eyes, suggesting this is homonymous and that the lesion is posterior to the chiasm. We describe this as a bilateral superior quadrantanopia rather than a hemianopia to distinguish this circumstance from the normally lateral hemianopias, and because the lesion required to cause this finding is bilateral.