Design and setting: Retrospective cross-sectional study, in a GDM clinic at a tertiary referral centre.

Patients: Women attending the GDM clinic at Westmead Hospital from 1 February 2007 to 1 February 2008, excluding those with prepregnancy glucose intolerance.

Results: 147 women with a mean gestational age of 35 ± 2 weeks were included, of whom 41% had insufficient or deficient levels of 25(OH)D (≤ 50 nmol/L). Ethnicity, occupational status and season significantly influenced 25(OH)D levels (P < 0.01 for all) but BMI did not. 25(OH)D levels were inversely associated with fasting and 2-hour blood glucose levels during OGTT (Spearman r = − 0.16; P = 0.05 for both) and with log[HbA1c] (Spearman r = − 0.32; P < 0.001). BMI and insulin doses were also associated with HbA1c levels. Multivariable analysis identified 25(OH)D and blood glucose levels during the OGTT as independent predictors of HbA1c levels.

Conclusions: Lower 25(OH)D levels are independently associated with poorer glycaemic control. Future randomised trials are needed to determine whether vitamin D plays a role in glycaemic control in GDM. Regardless, maternal vitamin D insufficiency has adverse effects including neonatal hypocalcaemia and rickets. The 41% prevalence of inadequate 25(OH)D levels in the women in our study is unacceptably high. We propose routine 25(OH)D testing of all pregnant women at screening for GDM or earlier, and treatment of women who are found to be deficient.

Vitamin D deficiency in pregnancy is common, particularly in dark-skinned and veiled women living in temperate climates.1,2 Potential short-term consequences include neonatal hypocalcaemia and seizures. Longer-term complications for offspring include failure to thrive and rickets, which is undergoing a resurgence in Australia.3,4 In adults, deficiency is epidemiologically associated with increased risk of some cancers, autoimmune diseases (including type 1 diabetes) and infectious diseases.5 A number of reports suggest an association between vitamin D deficiency and type 2 diabetes.6-10

Pregnancy is an insulin-resistant state during which improved β-cell function and proliferation normally occur to meet increased secretory demands.11 If, as evidence suggests, vitamin D contributes to insulin sensitivity, or β-cell function and insulin secretion,12 deficiency may contribute to impaired glucose tolerance during pregnancy.

The influence of vitamin D status on glycated haemoglobin (HbA1c), a marker of longer-term glucose control, has not been established in women with GDM. We measured 25(OH)D levels and examined associations with HbA1c levels and glycaemic control in a population of women with GDM.

Westmead Hospital is a tertiary referral centre. As part of the usual care at the GDM clinic, serum HbA1c levels are routinely measured late in the third trimester. From February 2007, serum 25(OH)D testing was added at the time of HbA1c testing owing to concerns about high prevalence of vitamin D deficiency and insufficiency.

Radioimmunoassay was used to measure 25(OH)D levels (IDS, Boldon, UK). The interassay coefficient of variation was 7% at < 50 nmol/L and 13% at > 80 nmol/L. Women with 25[OH]D levels < 50 nmol/L received cholecalciferol supplementation.

GDM was diagnosed according to Australasian Diabetes in Pregnancy Society (ADIPS) criteria:18 a fasting blood glucose level (BGL) of ≥ 5.5 mmol/L and/or a 2-hour BGL of ≥ 8 mmol/L on 75 g OGTT (performed for women with previous GDM and those with positive 50 g glucose challenge test results on routine screening at 26–28 weeks). All women with GDM were seen by a diabetes educator and dietician and were taught home blood glucose monitoring. Commencement of insulin therapy and treatment targets were based on ADIPS recommendations.18

Women with known or clinically suspected pregestational diabetes were excluded from our study. All other women with GDM for whom 25(OH)D levels were measured in the 1-year period from 1 February 2007 to 1 February 2008 were included so that data were available for every season. Data were collected on ethnicity (self-assigned), maternal age, occupational status, height, and weight at booking in. Measures of diabetes severity included fasting and 2-hour BGL on OGTT, basal insulin dose, short-acting insulin dose, and total maximal daily insulin dose and HbA1c level. In the clinic, we recommended that all women take one of two kinds of pregnancy multivitamin that supply 400 IU or 500 IU of cholecalciferol daily.

Statistical analyses were performed using SPSS, version 17.0 (SPSS Inc, Chicago, Ill, USA). Two-sided tests were used throughout. Analysis of variance was used to test for differences in the distribution of 25(OH)D and log[HbA1c] by categorical variables. Spearman correlations were used for non-normally distributed data, and Pearson correlations for normally distributed data. Data on HbA1c levels, body mass index (BMI) at booking in, all insulin doses, and fasting and 2-hour BGLs were log-transformed to approximate normality before analysis. The relationship between 25(OH)D and log[HbA1c] was examined before and after exclusion of outliers (HbA1c levels of > 7.5%, > 7%, and > 6%). Univariate analysis was used to identify factors significantly correlated with the dependent variable (eg, HbA1c), and these factors were fed into multivariate analysis to identify independent predictors. Stepwise variable selection was used to identify independent predictors of log[HbA1c]. Variables considered in the model were age, season, employment category, ethnicity, 25(OH)D level, log[BMI], log[fasting BGL], log[2-hour BGL], and log[total daily insulin dose]. P values of < 0.05 were considered significant.

Factors associated with 25(OH)D levels are shown in Box 1. Levels of 25(OH)D differed by ethnicity. Bonferroni-corrected post-hoc analysis revealed comparable levels in the Indian Subcontinental and Middle Eastern groups, which were significantly lower than those for the East or South-East Asian and Caucasian groups (levels in the latter two groups were also comparable). There was also significant seasonal variation in 25(OH)D levels. Levels during summer were significantly higher than those for other seasons, which were comparable on Bonferroni-corrected post-hoc analysis. Women in paid employment had higher mean 25(OH)D levels than those performing home duties. There was no significant association between BMI at booking in and 25(OH)D level.

25(OH)D and measures of glycaemia

Apart from the expected associations between BGLs during OGTT and HbA1c levels, the only factors in addition to 25(OH)D that were significantly associated with HbA1c levels were total daily insulin dose and BMI at booking in. Potential explanatory variables considered in a multivariable linear model of log[HbA1c] were age, season, occupational status, ethnicity, 25(OH)D level, log[BMI], log[fasting BGL], log[2-hour BGL], and log[total daily insulin dose]. This identified 25(OH)D, fasting BGL and 2-hour BGL as independent predictors of HbA1c (overall R2 = 0.49; part correlations, − 0.21, 0.51 and 0.20, respectively). The residuals demonstrated no statistically significant departure from normality.

Vitamin D insufficiency has a well established impact on bone density, neonatal vitamin D and calcium status, and childhood rickets.3-5,20,21 The 41% prevalence of inadequate 25(OH)D levels in women with GDM in our study is unacceptable and identifies vitamin D insufficiency as an issue of public health significance. The high rates of deficient and insufficient 25(OH)D levels occurred despite all women being advised to take pregnancy multivitamins containing either 400 IU or 500 IU cholecalciferol per day and despite the temperate climate of Sydney.

In addition, we report a novel finding of an independent inverse association between 25(OH)D and HbA1c in women with GDM, showing a potential interaction between 25(OH)D and blood glucose control in pregnancy. The robust relationship between 25(OH)D and HbA1c is supported by the finding that it remained significant after exclusion of HbA1c values that were > 6%. Also, the finding that the relationship was detectable despite standard treatment for GDM attests to its strength. No previous studies have reported this association. The correlation persisted after adjustment for other independent predictors.

Previous studies provide mechanistic support for these findings. Mouse models of vitamin D deficiency demonstrate altered insulin secretion.19 In a study of pregnant Iranian women, 25(OH)D levels were inversely correlated with homeostasis model of assessment for insulin resistance (HOMA-IR) index, suggesting that deficiency may contribute to insulin resistance.15 In women with GDM, acute administration of intravenous 1,25-hydroxyvitamin D has been shown to decrease fasting glucose levels without altering the glucose response to OGTT, although insulin levels were decreased; it was concluded that 1,25-hydroxyvitamin D might have effects through altered insulin sensitivity.16

Our findings support a previously reported inverse correlation between 25(OH)D and fasting glucose, insulin and HOMA-IR index, measured during OGTT screening in obstetric clinic attendees; after adjusting for ethnicity, age and BMI, the relationship with glucose retained borderline significance.13 In our study, while age, ethnicity, season and occupation significantly affected 25(OH)D levels, they showed no significant relationship with log[HbA1c] either alone or in multivariable linear models. The lack of association between 25(OH)D and BMI concurs with the results of other studies of vitamin D in pregnancy, suggesting that body weight is unlikely to be a major confounder. As our study was retrospective, other potential confounders (eg, sunlight exposure, physical activity, dietary vitamin D and calcium intake) could not be examined.

A recent study of Indian women failed to demonstrate a relationship between vitamin D status and risk of developing GDM, although in mothers with 25(OH)D levels < 50 nmol/L, higher 25(OH)D concentrations were associated with lower 30-minute glucose levels on OGTT and higher fasting proinsulin concentrations.14 Population differences may have contributed to variation in these results. The mean vitamin D data in this study had much larger variation by season than in our study (< 30 nmol/L to > 70 nmol/L depending on the month), suggesting that levels over the course of pregnancy may have been relatively unstable.

Genetic variants of 25-hydroxylase, 1-α-hydroxylase and the vitamin D receptor have been described in patients with GDM.22 A combination of genetic and environmental factors determine vitamin D levels and their effects at the β-cell or insulin-sensitive tissues.

The relationship between 25(OH)D and severity of glycaemia demonstrated in our study is in the context of existing GDM. The results suggest that the possible contribution of vitamin D status during pregnancy to the pathogenesis of glucose intolerance in pregnancy should be studied further. In the Hyperglycemia and Adverse Pregnancy Outcomes study,23 an increase of 0.4 mmol/L of fasting glucose corresponded to an odds ratio of 1.38 for birthweight > 90th centile for the offspring, an odds ratio of 1.55 for neonatal cord blood C-peptide > 90th centile and an odds ratio of 1.11 for caesarean delivery (all of which were significant). An increase in 1-hour glucose of 1.7 mmol/L corresponded to odds ratios for the same outcomes of 1.46, 1.46 and 1.10, respectively. Compared to women with adequate 25(OH)D levels (> 50 nmol/L), women with inadequate levels demonstrated differences of 0.4 mmol/L in fasting glucose, 2.4 mmol/L in 1-hour glucose and 0.4% in HbA1c.These findings suggest that the size of the potential effect of vitamin D level is clinically highly relevant.

About 6%–10% of pregnant women in Australia develop GDM,24 which has long-term implications for their future risk of type 2 diabetes and also for the health of their offspring. Maternal diabetes in pregnancy increases the risk of obesity and diabetes in the offspring. Thus, if increasing 25(OH)D levels reduced the incidence or severity of GDM, this could have profound public health significance. The possibility that vitamin D supplementation might reduce gestational glycaemia is an intriguing hypothesis which warrants testing in prospective randomised clinical trials.

In our study population, there was an unacceptably high prevalence of vitamin D insufficiency and deficiency. Considering this in conjunction with the strong correlation of maternal 25(OH)D with cord blood and neonatal 25(OH)D1 and the known risks for neonates associated with low maternal 25(OH)D, we suggest routine testing of all pregnant women at the time of screening for GDM or earlier, and treatment of women who are found to be vitamin D deficient. Our study also revealed a potential link between vitamin D status and GDM, which should be studied further. 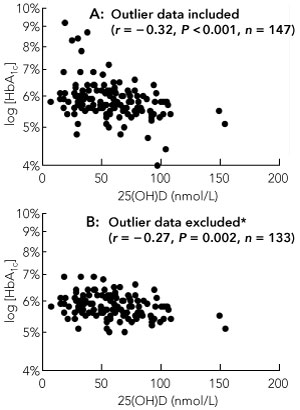