A 75-year-old man presented with a 2-month history of lethargy, nausea and poor appetite. His medical history included widespread plaque psoriasis. He had used Chinese herbal products for 3 years to treat the psoriasis, with significant improvement. The products included long dan xie gan wan, lei gong teng and ke yin wan, which he had obtained from outside Australia by mail order. He was not taking any other medications.

A renal ultrasound revealed unobstructed, small kidneys with cortical thinning bilaterally. A renal biopsy showed severe tubulointerstitial fibrosis and atrophy. There was no evidence of glomerulonephritis, nor of acute tubular necrosis (Box). These findings were consistent with chronic exposure to a nephrotoxin.

As the patient’s Chinese herbal products were suspected as the source of the nephrotoxin responsible for his nephropathy, they were sent to the Australian Therapeutic Goods Administration (TGA) to be analysed. High-performance liquid chromatography and mass spectrometry identified aristolochic acid in the Herbal International brand of long dan xie gan wan,1 and the product was subsequently recalled from the Australian market by the TGA.

In Australia, the use of complementary and alternative medicine (CAM), including Chinese herbal products, is increasing. However, scientific evidence on the safety, efficacy and quality of CAM, as well as regulatory controls, does not appear to support such popularity.2

Some herbal products contain aristolochic acid (AA), which is known to be nephrotoxic and carcinogenic.3 Aristolochic acid nephropathy (AAN), first reported in Belgium as “Chinese herbal nephropathy”,4 is characterised by progressive fibrosing interstitial nephritis leading to renal failure and severe anaemia. AAN is a worldwide problem, but its true incidence is unknown and probably underestimated,5 and though many cases of AAN have been reported, to our knowledge this is the first reported case in Australia. Many countries have prohibited the production and sale of herbal products containing AA,6 but despite bans, these products continue to be available through the internet or supplied through mail order.

In most of the reported cases, when the patient discontinued use of the drugs their renal disease still progressed rapidly to end stage.3 After exposure to AA, there is also a very high incidence of uroepithelial atypia and transitional cell carcinoma, and AA is now recognised as a potent urological carcinogen.7 Tissue samples from some patients with AAN and urothelial malignancy have revealed AA-related DNA adducts, which may be carcinogenic through a defect of DNA repair.8,9 The pathophysiological mechanisms of AAN are still unknown. In a rat AAN model, AA renal tubule toxicity has been associated with defective activation of antioxidative enzymes and mitochondrial damage. Activation of renal fibroblasts has also been proposed as the main source of collagen deposition leading to renal interstitial fibrosis.10

Therapeutic strategies have consisted mainly of supportive care in patients with AAN and renal failure. One study suggested that corticosteroids may slow the rate of renal deterioration.11 Renal transplantation may be an effective treatment strategy for those who progress to end-stage renal failure, with one report indicating no recurrence of AAN in five such patients after a follow-up period of 1 year.12

The clinical course of AAN has been related to the intensity and duration of AA exposure.13 A mean cumulative dose of 192 g of Aristolochia fangchi was ingested by one group of patients who developed end-stage renal failure related to AA.13 However, in most cases, the accumulated AA dose is difficult to ascertain because the dose is recalled retrospectively by patients; the patient may ingest herbal medicines irregularly and there is no strict recommendation of dosing on labels; the AA levels in the herbal mixtures vary due to different manufacturing processes; and the quantity of AA also varies in different herbs and even in the same herb grown in different areas.14 Also, patient factors such as genetic polymorphism, environmental chemicals and drugs may result in individual differences in susceptibility to AA toxicity.5

Many different brands of long dan xie gan wan are available and are commonly sold as a “liver tonic” containing the herb Caulis aristolochiae manshuriensis. This herb is known to contain AA, and there have been cases of nephropathy with similar clinical presentations reported after its ingestion.15 C. manshuriensis was not labelled as an ingredient in our patient’s brand of long dan xie gan wan. Although AA in long dan xie gan wan is the most likely aetiology for his nephropathy, other potential contributing nephrotoxins such as heavy metals and ochratoxin A, found in other products he was taking concomitantly, cannot be excluded.16,5

In Australia, the sale of CAM is regulated by the TGA.17 In July 2001, alerts to health practitioners were distributed by the TGA,18 and in January 2002, bans on herbal products suspected to contain AA were instituted,19 but this patient was still able to purchase the product by mail order. Chinese herbal medicines containing AA remain available for purchase over the internet and through Chinese herbal retailers.6,20 Internet commerce has revolutionised accessibility to herbal medicines and has made regulation more difficult. A South Australian public survey in 2004 found that about half of CAM users believed that CAM products were independently tested by the TGA, and did not report their use to their general practitioner.2 It is therefore apparent that tighter regulations on CAM are needed.

The occurrence of this case in Australia highlights the need to review CAM regulations and for clinicians to be vigilant in their assessment regarding the use of CAM, especially when the aetiology of renal dysfunction cannot be identified. Until more stringent regulations are put in place to ensure quality, safety and efficacy of CAM, public awareness of their dangers should be raised. 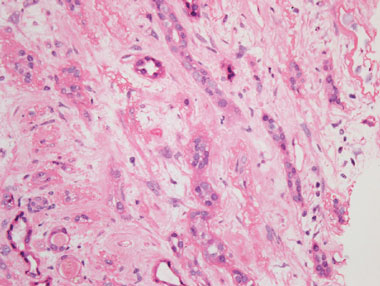