Jim Gardiner was born in Ballarat on 5 May 1922. He studied medicine at the University of Melbourne, where he met his future wife Jenny, and received his Doctor of Medicine degree in 1948.

From 1945 to 1947, Jim was a Resident Medical Officer at Royal Melbourne Hospital, after which he took up the position of Assistant Pathologist at The Alfred Hospital in Melbourne. In 1949, he moved to London, where he was a Registrar at the Brompton Hospital for Consumption and Diseases of the Chest. 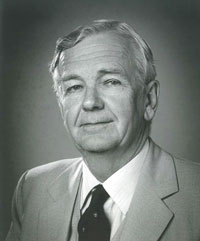 In 1952, Jim returned to Melbourne as Kimpton Research Scholar at the Baker Medical Research Institute, where he was involved in developing new methods in cardiac diagnosis. At the Baker Institute, he pioneered cardiac catherisation with Dr Tom Lowe and established the Cardiovascular Diagnostic Service in 1953. When the diagnostic service moved from the Baker Institute to The Alfred in 1954, Jim became its first director, a position he held until 1959. The diagnostic service played an instrumental role in the development of cardiopulmonary bypass surgery and the first successful open-heart surgery operation in Australia in 1957.

From 1957 until his retirement in 1982, Jim was an Honorary Physician and then Visiting Physician at The Alfred, where he also served as Dean of the Clinical School from 1975 to 1978.

Throughout his career, Jim made important contributions to advancing the treatment of hypertension. He was also highly regarded as a teacher and a mentor. Jim occupied several important positions in professional bodies. He was a member of the Board of Censors of the Royal Australasian College of Physicians (1966–1976), and secretary/treasurer (1956–1959) and president (1972–1974) of the Cardiac Society of Australia and New Zealand.

Jim was known for his warmth, willingness to support others and broad humanitarian outlook. Outside of his professional commitments, his great interests were astronomy, classical music and golf.

Jim died from cancer on 19 February 2011. He is survived by his children Jamie, Gillian and Christopher.