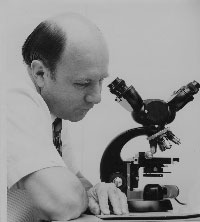 Bob Barter, who contributed much to the establishment of gynaecological oncology and neonatal pathology services in Western Australia, died recently in Perth at the age of 85.

Bob was born in Perth on 27 January 1925. He was educated at Scotch College, Perth, where he was dux of the school in his final year. As there was no medical school in WA at the time, he studied medicine at the University of Adelaide, completing his undergraduate degree in 1949 and a doctorate (on the pathology of lung disease in premature babies) in 1952. He was then awarded a Nuffield Fellowship to study at King’s College in London.

Bob returned to Australia in 1954 and worked briefly as a Senior Lecturer at the University of Adelaide before taking an Assistant Pathologist position at the Royal Women’s Hospital in Melbourne in 1955. When a position as Senior Lecturer at the new Faculty of Medicine at the University of Western Australia became available in 1960, he returned with his family to Perth. He was subsequently appointed Associate Professor and Director of the newly established Pathology Department at King Edward Memorial Hospital for Women (KEMH).

Apart from a sabbatical year spent as Visiting Professor at Ohio State University in Columbus, Ohio, in 1967, Bob remained at KEMH. During his time at KEMH, community cytological screening for cervical cancer was initiated in Australia. In its early days, it was viewed with considerable scepticism; indeed, the program in WA almost foundered due to lack of standardisation of laboratory cytological examination and reporting, but Bob took on the training and accreditation of scientific staff to a high standard and the crisis was averted. From 1970 to 1972, he was a consultant to the World Health Organization program that was establishing cytology services in Indonesia.

From 1976, Bob played a crucial role in the newly established gynaecological oncology service at KEMH. He conducted weekly Tumour Board multidisciplinary meetings until his retirement, making a major contribution to the management of women with gynaecological cancer. He taught medical undergraduate and postgraduate students throughout his career, and had a long association with the Cancer Council Western Australia, serving as its president from 1974 to 1978. In 1990, he was made a Member of the Order of Australia in recognition of his services to medicine.

After retirement in 1985, Bob turned his restless intellect and energy to other pursuits, including farming, travel, foreign languages and reading. The last 10 to 15 years of his life were dogged by failing health, which he faced with great fortitude. A series of strokes left him with increasingly severe dysphasia, and eventually resulted in his being unable to read. Despite his progressive incapacity, Bob remained interested in people and the world, and did not lose his sense of humour. This was in large measure made possible by the unfailing love and support of Lyle, his wife of 57 years.

Bob died peacefully in hospital on 12 October 2010. He is survived by his wife Lyle, daughter Ann and son Graham, and predeceased by his older son Michael.