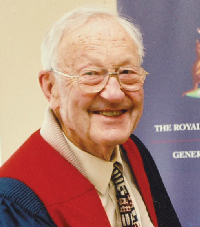 Trevor Beard was born on 11 May 1920 in Gloucester, United Kingdom. He studied medicine and surgery at the University of Cambridge and worked as a Resident Medical Officer at St Bartholomew’s Hospital and the City of London Maternity Hospital.

In 1951, he moved from the UK to Australia and began general practice at Campbell Town in Tasmania. During this time, he vigorously spearheaded a successful campaign to eliminate human hydatid disease in Tasmania — the first jurisdiction in the world to declare provisional eradication of hydatid disease. He was formally recognised for this work when he was made an Officer of the Order of the British Empire (OBE) in 1966.

Trevor devoted his life to improving public health. In the 1970s, he joined the Department of Health in Canberra in a senior public health policy role, and in the early 1980s, he moved into cardiovascular research at Canberra’s Woden Valley Hospital.

After his official retirement in 1986, Trevor returned to Tasmania in 1987 and took up an Honorary Research Fellowship at the Menzies Research Institute in Hobart. Right up to the end, he remained active in his research on hypertension and salt intake, and was involved in various research projects, including the first large community survey of sodium intake in Australia. He wrote a guide to adopting a low-salt diet,1 and went on to develop a related website (http://www.saltmatters.org). He passionately promoted the use of low-salt diets to prevent hypertension and vigorously lobbied many areas of the food industry and government, playing a pivotal role in persuading the government to lower the official sodium intake recommendations in Australia in 2005. At a local level, he advocated successfully for the Royal Hobart Hospital and Meals on Wheels to provide low-sodium meals.

Trevor actively campaigned for the introduction into Australia of the UK’s “traffic light” food-labelling system (which uses colour-coding to designate low, medium and high levels of total fat, saturated fat, sugar and salt in foods). In 2010, at the age of 90, he set a challenge for Drysdale House in Hobart — training ground for future chefs in Tasmania — to reconcile gastronomy with health by providing monthly lunches that would meet low fat, sugar and salt requirements.

In addition to his OBE, Trevor received many other honours. He was awarded a Winston Churchill Fellowship in 1966, the Johnston Medal from the Royal Society of Tasmania in 1987, honorary life membership of Nutrition Australia in 1997, and honorary Fellowship of the Royal Australian College of General Practitioners in 1995. He was declared Senior Australian of the Year 2006 for Tasmania.

Trevor died on 2 September 2010 of acute myocardial infarction following a successful total knee replacement and is survived by his four children, Tony, Jane, Simon and Lily.

One of the many privileges of working with Trevor was witnessing his passion for his work. He was a man of formidable intellect, tenacity, good humour and personal warmth. We have lost a truly remarkable colleague and friend.