Design, setting and participants: Prospective convenience study in a tertiary hospital emergency department (ED). Patients presenting to the ED for an amphetamine-related reason were eligible for inclusion. We collected demographic data, drug use data, and performed a mini-mental state examination (MMSE).

Main outcome measures: The proportion of patients with an abnormality on their MRI scan.

Conclusion: In this pilot study of brain MRI of young people attending the ED with an amphetamine-related presentation, one in five had an occult brain lesion. While the significance of this is uncertain, it is congruent with evidence that amphetamines cause brain injury.

Methamphetamine (MA) is a highly addictive substance that has caused serious public health problems globally.1,2 Recent population surveys report that 16% of people in the 20–29-year age group have used amphetamines.3 Of particular concern is emerging evidence of serious long-term effects of amphetamine use, including depression, anxiety, psychosis and memory disturbance.4

Neuroimaging studies demonstrate abnormalities in abstinent MA users.5-8 The aim of this study was to determine the prevalence of clinically occult cerebral abnormalities in active amphetamine users presenting to our emergency department (ED).9

This was a prospective convenience observational pilot study conducted in the ED at the Royal Perth Hospital (RPH), Western Australia, from 9 April 2008 to 27 July 2009. Patients with an amphetamine-related presentation were eligible for inclusion.

All patients received standard clinical management and a mini-mental state examination (MMSE) was performed.10 Detailed data on their drug use were collected. When possible, an MRI was performed during the time of patients’ attendance in the ED, or shortly after discharge. Any patient who was identified on MRI as having an abnormality was referred to the RPH neurology service for assessment.

We aimed to screen 30 patients in this pilot study. Also, we arbitrarily categorised the patients into two patterns of drug use: serious (injecting, snorting or smoking MA and other illicit drugs) or recreational (oral use only, including ecstasy, marijuana and alcohol).

The study was approved by the RPH Ethics Committee, and all participants gave written informed consent.

The demographic profile, clinical characteristics and drug-use history of the eight patients who did not have an MRI scan were similar to those who did have a scan.

The mean age at which the 30 patients who did have an MRI scan first started to use amphetamines was 18.0 years (SD, 3.1 years; range 13–26). Twenty-three were classified as serious drug users, and the remainder as recreational users. Box 2 shows a detailed history of their drug use. Other drugs used included cocaine (n = 6), heroin (n = 5), lysergic acid diethylamide (LSD; “acid”) (n = 5) and hallucinogenic mushrooms (n = 1). Twenty-five patients were cigarette smokers (mean usage was 21 cigarettes/day for 11 years), and two were ex-smokers.

Twenty-one patients required sedation for agitation in the ED, most commonly with benzodiazepines. The median time from last amphetamine use to interview was 27 hours (IQR, 11–60 hours), and the median time from last sedative dose to interview was 2 hours (IQR, 0–9 hours). The median MMSE score was 27/30 points (IQR, 26–29). The most common deficits were seen in the questions on orientation, attention and calculation, recall and language. Conditions in patients’ medical histories that might be associated with abnormalities seen on MRI scans, such as migraine, were similar in those with and without abnormalities.

Six patients had abnormalities showing on their MRI scan. Four of these six were male, with a median age of 29 years. The most common MRI abnormality seen (n = 4) was an unidentified bright object (UBO). This is a T2 hyperintensity in subcortical white matter, without a corresponding diffusion-weighted imaging abnormality. Three of the four UBOs seen were in the frontal lobes (Box 3). One patient had cortical atrophy, and one had hippocampal oedema and sclerosis.11 Five of the 23 serious users had abnormalities showing on their MRI scans.

In our pilot study we found that one in five patients had abnormality on their MRI brain scan, the most common being a UBO. Katzman reported only five UBOs as incidental findings in 1000 asymptomatic volunteers (mean age 30.6 years).12 Most UBOs in our study were in the frontal region of the brain; this finding is consistent with reports of frontal abnormalities in MA users.5,13 Whether or not these UBOs are associated with long-term clinical effects is unknown, but our finding supports the possibility of amphetamine use being a risk for cognitive decline, and perhaps an increased risk of stroke.

The main limitations of our study are the small sample size, a patient group for whom reliable follow-up was not possible, with no age-matched controls, and the difficult type of research (in that it is difficult to attribute causation in users of multiple drugs). Many of our patients are chaotic, poly-drug users who access whatever is available, so other drugs could be contributing to the changes seen on MRI. Reporting bias is possible and minor abnormalities in MMSE scores are likely to have been influenced by the acute effects of intoxication, and, for some, the effects of sedation.

In this pilot study of MRI brain scans of young people attending the ED for amphetamine-related reasons, one in five had an occult brain lesion suggesting injury. While the significance of this is uncertain, it is congruent with evidence that amphetamines cause brain injury, and therefore could have public health implications. 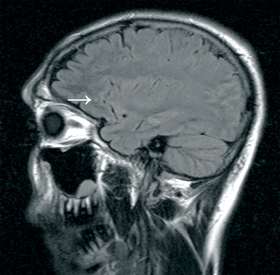 This study was supported by a grant from the RPH Medical Research Foundation. We are grateful for the support of the MRI team.