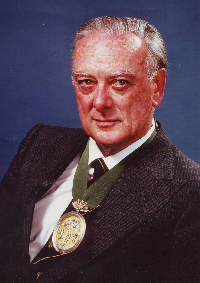 Gordon Kerridge was born into humble circumstances in Sydney on 7 April 1920. Watching his younger brother suffer from infantile paralysis (polio) gave him his vocation of becoming an orthopaedic surgeon. He was dux of Fort Street High School and was awarded a scholarship to attend the University of Sydney, from which he graduated in 1943.

After military service, Gordon was recruited to the Royal Newcastle Hospital by the pioneering medical administrator Dr Chris McCaffery, who had a vision of a community hospital treating patients according to need. There he joined a group of enthusiastic young doctors who established a reputation for the hospital of clinical excellence, high-quality training, continual innovation, and relentless questioning of existing medical and organisational dogma.

Gordon was a superb surgeon, pioneering many new operations and techniques. A gifted and inspiring teacher, he had the ability to explain complex issues simply. He was an early participant in setting up orthopaedic training schemes in Singapore, Indonesia and Fiji. He was elected President of the Australian Orthopaedic Association in 1979 and was later awarded the Association’s highest award, the L O Betts medal, of which he was particularly proud.

In the 1950s, Gordon helped establish the Hunter Orthopaedic School, where children of sound mind but with profound physical disability could receive a normal education. Throughout the 1960s, he was a tireless advocate for road safety, educating the community through talks and slideshows and lobbying the industry and politicians. He worked closely with the Minister for Transport to win community support for legislation to make the wearing of seatbelts compulsory in 1971.

Gordon was closely involved in the establishment of the University of Newcastle’s Medical School. Above all, he taught his students the art of being a good doctor — how to think, how to solve problems, and how to maintain an ethical and compassionate approach. His teaching was peppered with good stories and bad jokes.

His surgical abilities were surpassed only by the quality of his relationships with people. His empathy and rapport with patients and families was extraordinary; he always had time for a word or a joke to share with the cleaner, the ward clerk, the nurse or the orderly. After retiring from operating in 1986, he established a consulting practice, which he enjoyed for the rest of his life.

A proud and passionate citizen of Newcastle, Gordon served the community in numerous ways. He was an enthusiastic patron of Waratahs Rugby Union Club and Norths Rugby League Club, and was involved in the scouting movement. In 1978, he was made a Member of the Order of Australia for services to the community.

The later years of his life were difficult. A number of illnesses in the family were distressing; Newcastle lost some of its identity as Australia deindustrialised; the ethos of medicine drifted away from his ideals; and much of the heritage and principles associated with his beloved Royal Newcastle Hospital were lost due to reorganisation, a geographical move, and health politics. Although privately disappointed and frustrated, he remained active in medicine and in the community. He recovered after a fractured hip and decided to retire, but died suddenly on 21 August 2008, shortly after closing his rooms.

Gordon is survived by his wife Cath and their large family. Four of his six children are involved in the health care field.