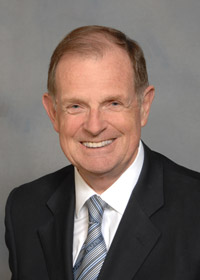 Greg Mundy was born on 16 June 1942 in Melbourne. Over his career in Australia and the United States, Greg touched the lives of many Australian and US medical graduates.

Greg graduated from the University of Melbourne in 1966 and moved with his wife, Helen, to take up a residency at the Royal Hobart Hospital. He immediately stood out as someone destined for leadership in academic medicine. He pursued a doctorate in multiple myeloma under the guidance of Albert Baikie, Professor of Medicine at the University of Tasmania. This probably set the scene for Greg’s continuing interest in the area of bone biology and cancer.

After completing his physician training in Hobart, he moved to the US in 1971. Initially, he worked in clinical pharmacology at the University of Rochester, New York, before collaborating with Larry Raisz at the University of Connecticut, Farmington. This laid the foundation for his subsequent career as an international leader in bone biology. In 1980, Greg took up the Chair of the Department of Endocrinology at the University of Texas Health Science Center in San Antonio, establishing a reputation in the top 2% of National Institutes of Health (NIH) awardees.

In 2006, Greg was appointed Director of the Center for Bone Biology at Vanderbilt University, Nashville, as John A Oates Chair in Translational Medicine and Professor of Medicine, Pharmacology, Orthopedics and Cancer Biology. He won many prestigious awards from the American Society for Bone and Mineral Research, was President of that Society and of the International Bone and Mineral Society, and also served on several other NIH committees. Greg established OsteoScreen, a successful biotechnology company, in partnership with the University of Texas. He trained more than 150 PhD students from around the world, published over 540 articles, authored 34 patents and developed many international collaborations.

Greg was a giant of a man physically and intellectually, but he was a gentle giant. He maintained close ties to Australia and an interest in cricket and football, being an avid Essendon supporter to the end. Despite his extraordinarily frenetic professional life, Greg lived very much for his family — Helen and his children, Gavin, Ben and Jennifer. He died at home on 25 February 2010 after a long fight with a cerebral tumour.