Haemophilus ducreyi is a well recognised causative agent of genital ulcers and chancroid. We report two unusual cases of non-sexually transmitted H. ducreyi infection leading to chronic lower limb ulcers. Both patients were Australian expatriates visiting Australia from the Pacific Islands — one from Papua New Guinea and the other from Vanuatu.

A 51-year-old Australian man presented with a 2-month history of non-healing ulcers on the lateral aspect of his lower left leg. The ulcer developed subsequent to a dog bite received in Papua New Guinea. The wound was treated initially in Papua New Guinea with debridement and oral doxycycline and the wound resolved. Subsequently, the patient developed another ulcer adjacent to the original dog bite wound. The ulcer became increasingly painful and erythematous, and was associated with a purulent discharge. On return to Australia, he was referred to a plastic surgery unit.

The patient underwent debridement of the ulcer and split skin grafting to cover the defect. He was prescribed flucloxacillin (500 mg orally every 6 hours) after surgery, but had further ulceration of the skin graft. Tissue samples were cultured and examined histologically.

Subsequently, a gram-negative coccobacillus was isolated on chocolate horse blood agar incubated at 35°C in CO2. The cultured organism was sent to a reference laboratory for further identification, and a presumptive diagnosis of Haemophilus ducreyi infection was made from the characteristic “schools of fish” morphology on staining (Box 1); this was confirmed with 16S rDNA (ribosomal DNA) sequencing.

The patient was referred to an infectious diseases service. On review, the wound was 2 × 1.5 cm, with a sloughy base, rolling edges and surrounding erythema (Box 2). He had no risk factors for sexually transmissible infections and had no evidence of genital lesions or inguinal lymphadenopathy. He did not undergo testing for sexually transmitted infections. He was prescribed oral azithromycin 1000 mg, with significant improvement in the ulcer appearance. The patient returned to Papua New Guinea and was subsequently lost to follow-up.

A 60-year-old Australian man who resided in Vanuatu presented to an infectious diseases unit with a 6-week history of a painful ulcer on the back of his lower leg. The ulcer developed following a visit to a jungle area of Vanuatu; he did not recall any prior injury. Before presentation, he had received dicloxacillin and metronidazole and had undergone regular iodine dressings for several weeks without clinical improvement. At review at the infectious diseases unit, the most striking feature was the severe degree of pain associated with the lesion. On clinical examination, the ulcer was 3–4 cm in diameter, with heaped-up necrotic edges and a sloughy base. The patient was not systemically unwell and had no risk factors for sexually transmissible infections.

A Gram stain of tissue obtained from biopsy and swabs of the ulcer showed numerous neutrophils and a large number of gram-negative coccobacilli; an organism was isolated from the swab and from the biopsy specimen on chocolate agar incubated at 35°C in CO2. The reference laboratory identified the organism as H. ducreyi using 16S rDNA sequencing.

The patient was treated with intravenous ceftriaxone 1 g daily for 1 week, followed by amoxycillin 1 g orally thrice daily for 2 weeks, and the size and associated pain of the ulcer decreased rapidly. He did not report any genital lesions and was not tested for sexually transmissible infections. The patient returned to Vanuatu but reported complete resolution of the ulcer to the treating physician.

Chronic skin ulcers secondary to H. ducreyi infection in the absence of genital lesions, as in our two cases, have not been reported until recently. H. ducreyi is a fastidious gram-negative coccobacillus. The association between this organism and chancroid, a sexually transmissible genital ulcer disease, is well established.1,2 Extragenital skin ulcers have been described resulting from autoinoculation among patients with genital ulcers.3,4 Human volunteers have developed mildly painful skin lesions following inoculation with H. ducreyi.5 Humans are the only known host for H. ducreyi; there is no recognised environmental or zoonotic reservoir.1,6

Apart from our two reported cases, to our knowledge, only two other publications have described chronic skin ulcers secondary to H. ducreyi infection.6,7 Box 3 summarises these cases and the cases we have described here. In all cases, the patients had chronic skin ulcers on lower limbs without evidence of genital ulcers or inguinal lymphadenopathy. All of these patients acquired the infection in the Pacific Islands.6,7 In most cases, the organism was cultured on selective media (eg, chocolate agar) and identified using 16S rDNA sequencing techniques.6,7

H. ducreyi is difficult to isolate from culture owing to several factors. H. ducreyi grows best between 33°C and 35°C in 5% CO2 and a humid atmosphere, and will not grow at 37°C. Enriched media, such as chocolate horse blood agar, are required for the organism’s growth. Microbiological specimens must be inoculated as quickly as possible to ensure organism survival.1 Upon Gram staining, H. ducreyi aligns in a “railroad”, “chaining” or “schools of fish” (Box 1) arrangement. Definitive identification of H. ducreyi requires specific molecular tests, such as 16S rDNA sequencing.1

Recommended treatment for H. ducreyi infection includes oral or intravenous azithromycin, ceftriaxone or ciprofloxacin.8 Plasmid-mediated β-lactamase production by this organism is well recognised; in a Californian report, 88% of H. ducreyi isolates produced plasmid-mediated β-lactamase.9 However, antimicrobial susceptibilities vary geographically. This may account for the response to penicillin or amoxicillin in three of the six cases reported thus far.

In summary, H. ducreyi may be an emerging aetiological agent in chronic skin ulcers in patients from the Pacific Island region. Given its fastidious nature, a high degree of suspicion is required to enable specific diagnosis. This organism should be considered in patients from this region who have non-healing ulcers without a causative organism isolated by normal culture methods. Consideration should be given to culture swabs and tissue on enriched media, such as chocolate agar, and for the use of other diagnostic tools, such as 16S rDNA sequencing. 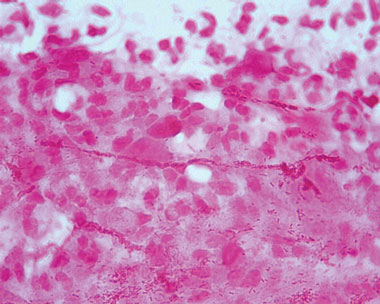 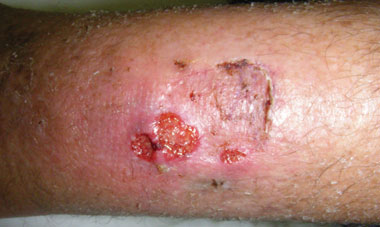