The prevalence of trachoma in Australia: the National Indigenous Eye Health Survey

Objective: To determine the prevalence of trachoma among Indigenous Australians.

Main outcome measures: Results based on a standardised protocol that included trachoma grading and double grading of photographs of the tarsus.

Results: 1694 Indigenous children and 1189 Indigenous adults were examined. Recruitment rates were 84% for children and 72% for adults. The overall rate of follicular trachomatous inflammation among children was 3.8%, ranging from 0.6% in major cities to 7.3% in very remote areas; 50% of communities in very remote areas had endemic rates (> 5%). Trachomatous scarring (TS) occurred among 15.7% of adults, trachomatous trichiasis (TT) among 1.4% and corneal opacity (CO) among 0.3%. TS was found in all regions and TT in all except major cities and inner regional areas. The highest community rates for TS were 58.3%; for TT, 14.6%; and for CO, 3.3%.

Conclusion: Blinding endemic trachoma remains a major public health problem in many Aboriginal and Torres Strait Islander communities. Although active trachoma is predominantly seen in very remote communities, scarring and blinding sequelae occur among Indigenous people across the country. The Australian Government’s recent commitment to eliminate blinding trachoma is welcomed and much needed.

Trachoma, or “sandy blight”, disappeared from urban Australia in the early 20th century,1 and from regional communities during the 1930s. Despite a chance comment in 1688 by a Dutch navigator, William Dampier, trachoma was not a feature of traditional Aboriginal life.2 Traditional Aboriginal culture is based on good vision and visual representation, not on blindness and visual disability. Trachoma was reported in Aboriginal communities in the 1930s, and studied systematically by Father Frank Flynn, an army chaplain and ophthalmologist in the Northern Territory during the Second World War.3 Dame Ida Mann clearly showed trachoma to be a widespread problem in the 1950s and 1960s.4 The extent of trachoma in Aboriginal communities was further defined by Fred Hollows and the National Trachoma and Eye Health Program (NTEHP) in the 1970s.5

However, without coordinated and sustained effort, trachoma control has limited impact,6 and blinding endemic trachoma still persists in Aboriginal communities7-10 despite the knowledge that has been gathered about its control.11,12

We report the prevalence of trachoma found in a national, population-based random cluster sample survey of eye health among Indigenous children and older adults.

The sampling method has been described in detail elsewhere.13 Briefly, we grouped Australian Bureau of Statistics (ABS) Indigenous Areas (IAREs) into five strata based on the Accessibility/Remoteness Index of Australia:14 “major city”, “inner regional”, “outer regional”, “remote”, and “very remote”. The very remote stratum was then subdivided into “very remote coastal” and “very remote inland”. Within each of these six strata, five sample areas or communities were randomly selected using 2006 ABS census data15 to identify geographical areas containing about 300 Indigenous people. The sample size of 1500 children aged 5 to 15 years and 1500 adults aged 40 years and older was selected based on the ability to detect changes in vision impairment;13 it also conformed to the World Health Organization’s recommendation for the assessment of trachoma of 50 children per cluster.16 Fieldwork was undertaken between January and December 2008.

An informal census was undertaken at each site using community data and local informants to establish the size of the eligible population of Indigenous children aged 5 to 15 years (inclusive) and Indigenous adults aged 40 years and older.

A standardised questionnaire collected data on demographics, general health, eye health and health service utilisation, and a standardised eye examination was performed.13 Trachoma was graded in each eye using a × 2.5 loupe according to the WHO simple grading system,17 where:

When the two photogradings disagreed on the presence or absence of a WHO-defined sign, the photograph was regraded for a third, definitive time.

In this analysis, the photograding was used to define trachoma (TF, TI and TS) except when photographs were not available, in which case the clinical grading was used. TT and CO were assessed clinically. Participants were considered to have active trachoma if TF and/or TI were present.

Permission was obtained to examine children in schools. This research was conducted in accordance with the tenets of the Declaration of Helsinki as revised in 2000. Written, informed consent was obtained for all participants before examination.

Trachoma photograding was available for 2663 participants; clinical grading was used for 175 (6.1%) participants without a gradable photograph; and 45 participants (27 children and 18 adults) declined examination.

There was no significant sex difference in the rates of trachoma in children or adults, and the data are presented for the whole population (χ2 tests gave P values between 0.2 and 1.0).

Scarring was uncommon among children, even in communities with a higher prevalence of TF (Box 2). Conversely, TS was common among adults and widely spread, occurring in all strata; in three very remote communities, over half the adults were affected (Box 2). The age-specific rates of scarring increased with age, although in most strata, rates fell in the oldest age groups (Box 4).

Specificity of TF and TS

The strengths of our study include its national scope, the study design and sampling framework, the standardised methodology and the use of photograding for trachoma. The sampling method also permitted a cost- and time-efficient study. Weaknesses include the small sample size, the limited number of sites and the variation in examination rates between some sites.

These data are the first national trachoma data for Australia since the 1980 report of the NTEHP.5 The overall prevalence of TF among children aged 5 to 15 years reported by the NTEHP was 17.6%. However, 53.9% of TF was the least severe composite grade, “FTC”,5 which was not severe enough to be graded as TF according to our criteria. The adjusted prevalence of TF (“FTA” [the most severe composite grade] and “FTB”) equivalent to TF/TI would be 9.5%. This compares with the overall crude prevalence of 3.8% found in our study. For those aged over 40 years, the NTEHP reported 56.3% had cicatricial trachoma; 40.0% of these cases were graded “CTC”, which would be less severe than TS according to our criteria. The NTEHP also found TT among 6.0% of those over 40 years — of whom 41.0% were blind (2.5% of this age group examined).5 We found national rates for TS of 15.7% and 1.4% for TT. In our small sample, two adults (0.17%) were blind from trachoma.

These comparisons are limited, as the NTEHP grading system was less stringent and therefore gave higher prevalence. Second, the NTEHP examined few people in major urban centres; over two-thirds of its sample came from remote or very remote areas. The skewed study population would also have given a higher prevalence of trachoma. The NTEHP report did not provide data for individual communities and cannot be analysed retrospectively. However, although the overall rates of trachoma appear to have been reduced, the overall distribution of trachoma is not much altered.

The rates of trachoma reported from screening of Aboriginal school children in outback communities in the Northern Territory, South Australia and Western Australia in 2006 and 20079,10 are generally similar to our findings.

The fine grading of follicles identifies milder inflammation. The presence of F2 closely follows TF, suggesting that it reflects a milder stage of trachoma. However, the presence of a few equivocal follicles (F1) seems to be unrelated to trachoma. It is unlikely that milder inflammation (F2) would have blinding sequelae, but it indicates an underlying level of tarsal inflammation, some of which will be waxing or waning trachoma. This highlights the need for care in grading TF, especially in areas with decreasing levels of endemicity, as overgrading can be difficult to avoid.

Scarring was uncommon among children, even as measured by fine grading. Children with scarring were all from remote or very remote communities except for one 11-year-old boy in an urban area with S1, which may not have been related to trachoma. The high rates of TS among adults and the much lower rates of TS among children in the same communities suggest a real decrease in the severity of trachoma. However, without full cross-sectional data, this observation cannot be confirmed. The infrequency of TI among children (11/64 [17%] of those with TF) also suggests a decrease in the severity of TF. In some communities, specific trachoma control activities have been implemented.10 In addition, over the years, there have been obvious improvements in housing, water and sanitation and health care in general, including the ready availability and use of antibiotics to treat childhood infections. If the apparent decrease in severity of trachoma is real, it will make the recent Australian Government commitment to eliminate trachoma much more achievable.21

However, trachoma remains a significant public health problem in many communities, including half of the very remote communities in our study. Significant rates of TT still exist. The observed rate among older adults (1.4%) gives an adjusted population rate of 0.2%, double the WHO threshold.22 Participants with TS who were at risk of TT were found in 24 of the 30 communities, including major cities and regional areas (presumably, these participants grew up in endemic, more remote areas) and participants with TT were found in four of the six strata. This emphasises the general and ongoing need to carefully check older Indigenous people for signs of past trachoma and TT.23 Based on the observed prevalence, we estimate that throughout Australia there are 4778 Indigenous children (5 to 9 years) with TF, 16 314 adults (40 years and older) with TS, 1488 with TT and 273 with CO.

Overall, our study confirms that TF remains a problem in Indigenous Australian children in remote and very remote areas, and that the blinding sequelae of trachoma, severe tarsal scarring and TT still occur among older Indigenous people across the country. The Australian Government’s recent commitment to eliminate blinding trachoma in Australia is both necessary and timely.

1 Prevalence of active trachoma among Indigenous children (aged 5–15 years) in 30 communities around Australia, 2008 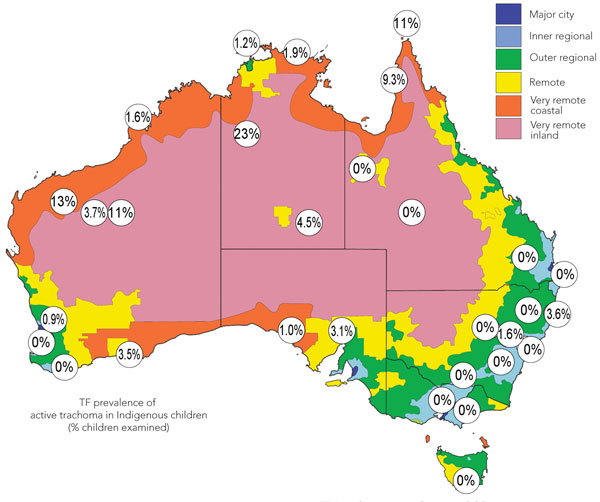 2 Prevalence of trachomatous disease among Indigenous children and adults in 30 communities around Australia, 2008

6 Prevalence of fine grades of follicular trachomatous inflammation among Indigenous children in 30 communities around Australia, 2008

7 Prevalence of fine grades of trachomatous scarring among Indigenous adults in 30 communities around Australia, 2008